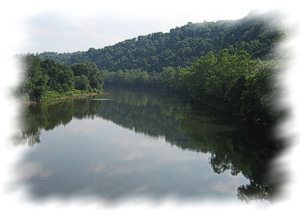 We decided to do our own multi-sport day-adventure--we dropped off our tandem kayak upstream at Sutersville, PA, parked downstream at Boston, PA, and rode our bikes up to the kayak via the Great Allegheny Passage trail that runs beside the Yough. Then we locked up our bikes and floated/paddled back downstream to the car. The bike ride was about 11 miles, and because of curves in the river, the float/paddle ended up being around 12 miles.

The put-in at Sutersville was very basic, but sufficient -- a small parking lot and a mud ramp into the river, with no other facilities. The facilities in Boston, PA are more extensive, with several large parking lots, a small building with maps and info about the Great Allegheny Passage, and a tavern with an ATM machine. We just locked our bikes and kayaks to out-of-the-way fences at each end -- it wasn't a problem.

The paddle itself was lovely -- very quiet (with just a few riffles here and there, interspersed with long stretches of mirror-like flatwater). There were areas with houses along the river, but much of the trip was wilder, with no people, just wooded hills, rock and nature. Twice we encountered party rafts in the middle of the river, made up of groups of people on inflatable rafts just hanging out. There were also a few fishermen, both onshore and in canoes, and three pontoon boats. Otherwise, we had the river to ourselves. 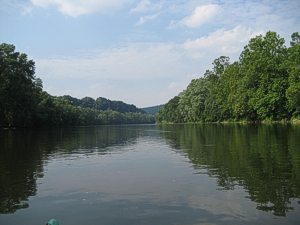 We're relatively new to self-guided paddling, so we were surprised at how long the paddle was compared to the bike ride. We had envisioned a relatively strenuous ride, followed by leisurely float back down river. However, the river was so flat and slow in most places that we had to paddle pretty consistently to make any progress. Next time we will allow more time!

In most places, the river was very shallow and we could see the bottom. We bottomed out a few times, but not too seriously -- it was probably novice error.

All in all, despite our miscalculations, it was a fun and beautiful trip, and we plan to do it again soon.

Boston, PA, is southeast of Pittsburgh, not far from McKeesport.