Every trip has to have it's share of all the critical elements the good, the bad, and the disasters fortunately we got our disaster out of the way early on. After planning this trip since January here we were on the back of a tow truck riding into Evanston WY and only forty hours from the time when we would lose our backcountry reservations. But the water Gods look out for fools and kayakers and once again the double protection paid off.

After some relatively simple and only moderately expensive repairs we were off and only a few hours behind schedule.

July seventh dawned cloudy with scattered showers, my fourteen-year-old son Jason and I were waiting when the permit station opened and spent an hour getting permits and watching the required backcountry video. An interesting point after all the paperwork and reservations to get into the backcountry they don't check to see if you ever leave, if you go missing they won't know until someone calls or they notice your car setting around.

We put our touring kayaks in at Grant village in a light shower and headed along the shore to the south. We felt the cold water immediately your legs soaked up the cold through the bottom of the boat. Yellowstone is the largest alpine lake in the world and the water temperature rarely reaches 50 degrees. Survival time for a swimmer is thirty minutes. 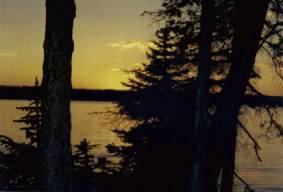 The first day went great we covered twelve miles and seen white pelicans and an osprey. We also skipped an open water crossing in deference to a thunderstorm and still raced it a quarter mile to shore and spent a half-hour under a tarp during a shower. On the first and second day we had deer graze through our campsite.

July eighth we covered about five miles but Jason was having trouble with either altitude or dehydration and the water was somewhat rough so we passed on a long open water crossing of the South Arm and found an empty campsite on the West shore. That afternoon we spent napping and concentrating on getting rehydrated.

July ninth we began retracing our path back out since we'd had a short run on day two we bypassed our first days campsite and made about nine miles.

We had a lot of fun watching a mother duck after hiding her babies on the shore she would flap along in front of us like she had broken her wing if we got too close she'd jump up and fly a few yards before suffering a sudden relapse. Even though we never went close to her she paralleled our course for over a mile flapping flying and falling, Jason had a lot of fun with the commentary "broken wing....broken wing, miraculous recovery....broken wing ....broken wing". As we were making camp we also had a moose stroll by within twenty yards of us.

July tenth there's ice on the back of our tent yes I said July tenth, we'd seen patches of snow under the trees but this was still a surprise. Out side there was no wind and the lake was like glass it really didn't feel that cold. We decided not to detour past the West Thumb geyser basin since there were powerboats in the area and we were starting to get sore. A helpful hint do the extras early in the trip when you can see the end it's hard to say let's do a few more miles just for fun. Since the water was so smooth we decided to shoot directly across the West thumb an open water crossing of three and one-half miles. Half-way across I remind my son we're in almost three hundred feet of water, he reminds me we can't swim to shore in the time we'd have before hypothermia sets in, we decide to stay in the boats.

You can't possibly distill a trip like this into a few pages and cover everything you've experienced, you've got to go for yourself to taste the air, hear the silence and appreciate the huge scale of the wilderness and it's well worth the trip.

A couple notes; During the summer there are forty thousand people in Yellowstone Park ninety-nine percent are within five hundred feet of a paved road the other four hundred are scattered across something like three hundred square miles. Start planning early you can mail reservations and they start opening them on April first. The NPS has a web site and the 800# has lots of information and they will send you a backcountry package with even more info. Most importantly if you need a partner for the trip call me!

Hotel, restraunts, and campgrounds are available at the put-in, backcountry campsites have a fire ring and a place to tie up your food. Make reservations April 1 to guarantee the sites you want.

North from Jackson Hole Wy. We put in at Grant Village, other put-ins are available.