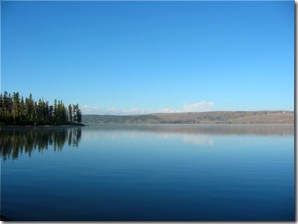 Checking in at the backcountry office, I listened to the required talk on safety, leave no trace, bear problems, and the hazards of Yellowstone Lakes. The required video covered the same issues. As the ranger filled out the permit he added the special note that he had advised me that solo travel in the backcountry was not recommended.

I spent the night at the Grant campground because they can be reserved and the ones at Lewis Lake cannot. Besides Grant has hot showers and Lewis doesn't.

Early the next morning I loaded up and headed for the boat dock on Lewis Lake. A father and his two sons were almost complete loading their canoe when I arrived. I unloaded my Chesapeake 18 from the roof and piled the gear next to it. I moved my rented SUV to the storage lot and put the slip with my backcountry number on the dashboard. Theoretically they check the lots periodically and if someone is overdue they alert the rangers.

As I completed loading the gear in the kayak another solo kayaker arrived and started unloading. I donned my farmer john and fleece top and pushed off into the glass smooth water and headed for the entry to Shoshone River on the far side of the lake. About half way across a slight breeze and chop picked up, not enough for a good push, but enough to reduce the overheating from being "dressed for immersion". With 50-degree water I wasn't taking any chances.

Entering the river, a spit of land blocked the wind and water returned to calm. A few ducks and loons contested the right of way but water walked out of the way. What I first took for a bear turned out to be two hikers heading for Shoshone Lake on the path adjoining the river. Shortly I met a few paddlers on their way out. They all had the same question, "Did we beat the wind?" The prevailing wind on Lewis Lake is dead into you as you cross over to the boat ramp. It typically doesn't come up until about 10 AM so experienced paddlers race to beat it. 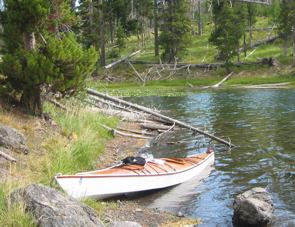 About 1 1/2 mile up river it takes a hard left at the foot of a large rock outcropping. It comes out into an adjacent valley and immediately becomes splintered and much shallower. After grinding over a couple of sand bars, I give up and start pulling the boat up river for the next two miles. In late summer the water is only knee deep and not that cold, I've been warned in spring it is chest deep ice water.

Pulling the boat up the twisting river is like being in line at Disney World, you are sure your goal is right around that next bend. Nope, not that one, must be the next one. At last Shoshone Lake opens up before you.

I take a break at the mouth (source?) of the river and have lunch. Renewed I paddle the three miles to my campsite. It is on a bluff near the narrows. I hang my food from the provided pole and pitch my tent overlooking the lake. The brood of grouse decides not to share the site and leaves.

Sunset is spectacular. I see the plume from a geyser rising up into the still chilly air in the distance. Once the wind dies down the woods become amazingly quiet. The dark sky reveals 100 times the stars I can see in St. Louis. Mars at its closest approach in centuries gets special attention.

The next morning I break camp and head deeper into the lake towards the Shoshone Geyser Basin. About halfway there I meet the ranger in his solo canoe. We chat about the wildlife and he asks if I have my permit handy. He seems genuinely surprised that I do. He is amused at the warning on going solo in the backcountry.

I reach the landing at the geyser basin about the same time as the kayaker I met at the boat ramp and a family in a canoe. With the warnings about breaking through the crust near the thermal features I took along my trekking poles. The Shoshone Geyser basin is one of the more active. It is also pretty much as it was found. No signs, no boardwalks, no railings. You are on your own with this natural wonder. As I walk through the valley two adjacent geysers erupt together. Spectacular! 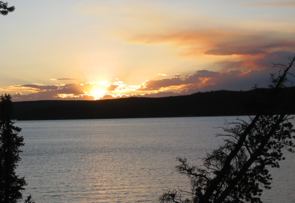 My camp the second night was also on a high point near the marshy mouth of a river. Unfortunately there wasn't room to get the tent the recommended 100 yards away from the food prep area. I set it up as far away as practical. The squirrel in the tree by the tent scolded me for intruding most of the night.

The third day started early with elk bugling in the marsh. The loons picked up the call, and half a dozen different bird species were heard doing morning roll call.

I packed up quickly to start my race with the Lewis Lake winds. As I paddled into the sunrise I noticed something small moving off my port bow. As I approached a large tail slap told me the beaver did not appreciate my approach. Shortly after two loons landed 20 feet in front of the bow. The escorted me for about half an hour. Squawking and water walking when I got too close, but making no effort to get out of my path.

Reaching the Shoshone River I again hang up on a sand bar. Going downstream I rode cowboy style during the deeper sections and hopped off and lined it through the shallow swift sections with bright plastic and gelcoat colored rocks as well as the very shallow sections where the river split.

As I reached Lewis Lake the wind was starting to come up. I aimed for a peninsula about half way. The waves came to about a 18" chop which broke over the bow occasionally. I reached the peninsula, beached the kayak and took a break. After a rest on the black beach, a shot of energy gel and a drink of water, I decided that I should at least put on the neoprene top and the cockpit skirt. I was working too hard to even consider the farmer john.

I pushed off and made directly toward the boat dock. With my improved forward stroke, I made pretty good time. Thank you Brent Reitz. About 200 yards from the boat ramp the wind died dead still and the waves quickly died also. The air remained calm the entire time it took to load the gear and boat onto the SUV.

I immediately headed back to Grant for a hot shower, $3 take as long as you want!, and a cheeseburger.

Heading south I stopped at Jenny Lake in the Tetons for a late afternoon/sunset paddle. Spectacular!

There is a $5 fee for the boat. A backcountry permit is required. The permit is free, BUT if you want to reserve sites ahead of time there is a fee for that.

Lewis/Shoshone Lake is best reached from the South entry. This allows you to miss much of the Yellowstone crowd, as well as enjoy the Tetons.