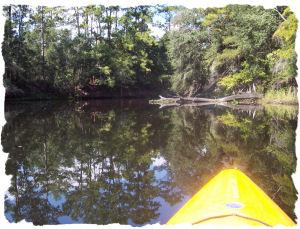 After staying the night in a very nice cabin at Rainbow Rivers Club we popped into Dragonfly Watersports right when they opened at 9am for a shuttle up the Withlacoochee. Dragonfly is awesome. The prices are reasonable and they shuttle when you want instead of set times you have to wait for. We chose the 10 mile paddle.

We dropped into a very small boat ramp and set out on the tannin stained water. We heard that the With was "Gator City", but didn't see any wildlife other than birds. There are house on one side along about half of the run. Tim, our shuttle driver, warned us about one place along the run where it is easy to get directed into a big lake instead of the run. It sure happened to us. We tried to follow the current but it was very slow and in this particular lake opening, nonexistent. This was after 6 miles.

So, this is what to do when you get to a big lake-like area. When approaching the lake area, the river widens. There are houses on the upper left bank beyond the entrance to the lake, if you turn left into the lake the houses are on your right. One of the houses has multiple boat carport with blue roofs. Instead of turning toward the houses, stick right and go beyond the houses. The river opening is practically hidden to the upper right around a corner. We found it because a boat came out of it. After choosing that opening, stick left. A bit later, there is a choice of direction that isn't very clear where there are overhead powerlines. Go to the right and go under the powerlines. Luckily, we got cell reception in these areas and were able to call Dragonfly and get directions. Our driver, Tim, had told us of these things during the shuttle, but... well, the info got mixed in our heads. A printout of the instructions for problem areas would have been cool.

The river later joins the Rainbow and the pull out is at the bridge.

It was a nice long leisurely paddle, great exercise and a beautiful day, but we didn't see anything exciting. If there had been some wildlife, it would have been great. One side of the river was totally wilderness, and the other side had houses about half of the time (similar to the Ocklawaha) but it lacked the "Otherworldly" quality of the Ock for me. It's nice, but not one I'm dying to do again soon.

Dragonfly Watersports is on the main drag of Dunnellon (Pennsylvania Ave. They are awesome and highly recommended for "With" or Rainbow shuttle or rentals. See my Rainbow River report for more details.