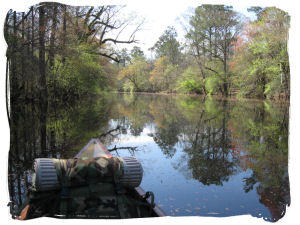 This trip was originally intended to be an extended trip, but due to the level of the river and the deadfalls across the river, the trip was only an overnighter.

I had been planning on paddling sections 1-7 (from Paul Ferguson's book "Paddling Eastern North Carolina" over the course of 3-5 days, depending on how much I intended to paddle each day. My hopes were quickly dashed on day two...

Early on Saturday, April 2, my wife drove me to my takeout to drop my truck for when I completed the trip and proceeded to shuttle me and my gear to my put-in. The trip was relatively quick with no major hang-ups. At the launch, which includes a moderate bank to carry gear down, I got my gear and canoe loaded and in the water, said my, "I love you"s and was off. It was about 1000 when I started paddling downstream.

There was a moderate current which is unusual for the flatwater rivers of this area, but nothing even bordering on unmanageable. My GPS had me moving at about 3.5 mph, which is about what I always average poking about. Things were going swimmingly.

About 3 miles in, I encountered the first dead fall across the river. The water was about thigh deep and I was easily able to drag my loaded canoe across it without a hiccup. A couple more miles, and the same thing. During this section I saw many large deer and ducks, a couple of blue herons and a couple of wild turkeys.

Around mile 6 there is a small farm bridge that can't be paddled under in high water; I was unable to paddle under this as the water was higher than normal. It's a short, maybe 10yd portage on the right to get around. I decided to have lunch there since I was unloading my gear anyway.

Back on the water, I made pretty good time and paddled until about an hour before sunset. Just past the Trent River Campground, I found a small inlet stream on the right and found a campsite with high ground and plenty of firewood for the night. Camp was set, dinner eaten and I settled in for the night to the sound of the owls in the woods. Total distance for day one was 17 miles; not too bad for an easy day.

Sunday morning, I got up early and broke camp leisurely; I hate to rush and work too hard when I'm supposed to be "getting away from it all". Had a hardy breakfast, got my gear loaded and was on the river by 0900.

I was making really good time; GPS showing 4.5mph. The river is a bit wider here and the current was definitely helping. About a mile from where I camped, I crossed under a bridge that marks the end of section 2 from the book. Overall, this would not be a good day, despite my travelling speed. 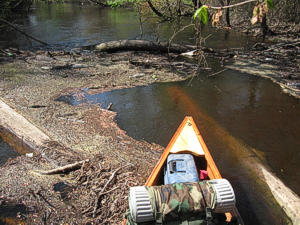 About a mile past the bridge, I ran into my first dead fall of the day. The tree was about 24" in diameter and the flotsam piled up against it actually had grass growing off of it. I checked the water depth, as there was a place where I could feasibly drag my loaded canoe across, but the water was at least 5 feet deep. Struggling back about 50 yards I found a place to make landfall and begin scouting a portage around the obstruction.

Anyone familiar with the flora of the eastern Carolina swamplands knows just how painful it can be to get through. For the uninitiated, let me try to paint a picture for you.

I found a small game trail heading off in the direction I wanted to go, but as I followed it, it veered from the river. The vines tie everything together pretty effectively and there is never an easy path through the brush here. (I should have brought a machete). Instead, what I had was an old, USMC entrenching tool (E-tool), basically a folding shovel. It's okay for cutting roots when you are digging, but not so good for bushwacking. Did I mention that the vines are covered with some wicked thorns?

This portage took me about two hours to cut and transport my gear. Lots of time lost, but I can recover. After all, I'm moving right along at about 4.5mph. Quick snack and back to paddling.

Moving along again, still clipping about 4.5mph, get about 300 yards.... Blammo! Another dead fall! Same scenario as the last one. This is where I begin to realize the folly (you do know that folly is the root word in "Foolish") of my packing system.

This portage was not nearly as long or as bad, but I tend to pack for a canoe trip like I'm gonna be paddling a canoe, not like I'm going on a backpacking trip. I have a tote with my kitchen and food, my pack with my camping "essentials" (shelter, clothes, hygeine kit, etc),a small Camelbak with snacks and such that I get into all the time, 5 gallons of water, and fishing poles and a tackle box.

I don't mind portages; as long as the portages exist. I wouldn't mind bushwacking; as long as I have the correct equipment to do so.

I did learn a lot, though. This trip has made me go back and completely reevaluate my kit. I have now resolved to have everything packed into one pack that can be easily portaged and live a little more spartan on the paddle trail. I will return to the Trent, and I will complete it. Maybe in a couple of weeks. While the river may have won the battle, the war is far from over!

I would recommend this trip to someone, but not solo, and not without understanding the physical demands. Whoever would attempt this behind me should have very strong outdoor skills and abilities, and be in reasonably good health. It is doable, but I didn't have the correct mental preparation to complete it this time around.

Primitive camping along the river