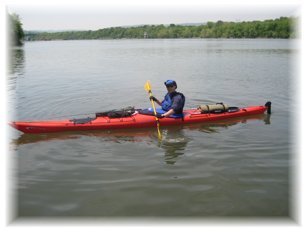 This was a leisure trip that I had been planning for a while that combined kayaking, fishing, and camping along the Tennessee River Blueway. My trip was 40 miles long and I divided it into 4 nights and 5 days (of course it could be done in fewer days). I stayed at Macllellan Island, Williams Island, and Oates Island Blueway campsites, and another campsite on Tennessee Valley Public Land.

This section of the Tennessee River had an infamous history with early settlers. Long before TVA built a system of dams, this section had rapids, shallows, and places called The Suck, The Pot, and The Skillet, names that are still on navigational charts today. The Chickamauga Indians, led by Dragging Canoe, also attacked Tennessee River settlers headed down the river from the narrow vantage points. Evidence has been found along this section of river of Native American cultures dating back 10,000 years ago. This was the section of the river I was about to traverse.

This trip was also a contrast of transportation of many kinds. Chattanoogas history is entwined with the river and the transportation through the area it has offered. Today there are barges, loading ports, and interstate bridges and railroads that can be seen connected to the river as one paddles down the river. 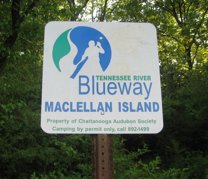 The campsites and land are owned and managed by agencies including the Chattanooga Audubon Society, the Tennessee River Gorge Trust, Tennessee Department of Forestry, and the Tennessee Valley Authority. The Williams Island, Macellan Island, and  have pit toilets (outhouses). All other campsites are primitive and without facilities. It is requested that everything be packed out. I used a water purification pump left over from my backpacking days in combination with an occasional fill up at an available faucet. Plan on at least one gallon per day.

The Spring wildflowers were in bloom. Blackberry bushes, white honey locust overhanging the banks gave an occasional breath of fragrance that is memorable. There were beaver, muskrat, blue heron, nesting ospreys, buzzards, turtles, all manner of song birds, and more ducks and Canadian Geese than could be counted. 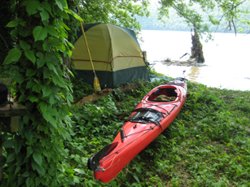 This was a fishing trip also. I am a simple fisherman and theres not any room for a big tackle box anyway. I took a small box of artificial lures, a few hooks and weights. I used one of two top water lures to catch enough bream, bluegill, perch, and bass to make it worth the trouble. I could have had fish dinners several nights but I let them all go. I got so tired of disentangling the fish that I flattened the barbs on the treble hooks. It was very rewarding to let the wind or current float me into the perfect spot and work the river overhung by trees.

The weather was Spring weather, meaning that it was cool (50s) in the evening and warm (70s) during the day. The wind beat me up pretty bad at times, paddling into the wind and 2 foot white caps that sometimes washed over the bow. Paddling with wind was easier but having white caps wash over my stern was disconcerting. There was a Spring thunderstorm the third day. Paddling in the rain was a new and enjoyable experience; I was in camp by the time the lightning fireworks started. This river is plenty wild for me.

This would be a great trip during the fall, since is goes through the area known as the Grand Canyon of the Tennessee River.

Campsites are all primitive with some outhouses available. There are multiple places to get out and at least one place to resupply