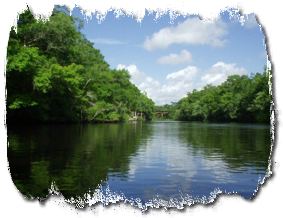 I took off from Jacksonville a little before 8:00 and made it to the Scots Landing, my put in point by a little after 9:00. I had a little trouble finding the road to the landing - it's a dirt road named Scot Landing, but there are no boat ramp or canoe trail signs.

It was a gorgeous day and had no trouble getting launched. Since I was alone I decided to head upriver, to make the return easier. I had originally planned to launch from St. George at Rt 2, but I had checked the streamflow levels and found that the St. Marys at McClenny, the beginning of the canoe trail was at an all time low, so I decided to go in at Scot Landing, which is the traditional end of the trail.

About a half-mile from the put in you cross back under Rt 301/ Rt 1 and after a bit farther you pass under a train trestle. This is a section of the river where you will find power boats, but I really had no problem with them at this stage. The river is beautiful with high sand banks in this area and still fairly straight. Much of the time I was completely alone on the river since there is virtually no development along the banks.

After about 1 1/2 hours of paddling I came to the next ramp, Traders Hill, on the Georgia side. This is a place where sailing ships had come up river to get fresh water and a trading community built up here. All that is there now is the ramp and a picnic area. Once past Traders Hill, there were no more boats. The river began to narrow and there were the well known beautiful sand beaches around many of the more frequent river bends. These were wonderful places to stop and stretch and have your lunch. In years past when I have canoed the other direction I've found many of these beaches make excellent camping areas. 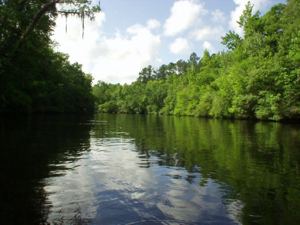 The river began to get shallower the farther I went. I had planned to get close to Thompkin's Landing before turning around, but both my turn around time and the river getting too shallow caused me to turn about 1/2 mile from Thompkins. Although there was still enough water to proceed, more frequent downed trees and snags were requiring more and more maneuvering to find the channel. There was also more development in this area and more people fishing along the banks.

Just as I turned around the nice, cooling breeze that had been accompanying me all day picked up velocity and for about half the way back was a real blasting wind. In places it was strong enough to blow my back against the current if I stopped paddling. My progress was good though and before I knew it I was back to Traders Hill.

It was then like a switch was turned on and the power boats and Jetskis showed up. However, this time they, in general, were much less courteous. About half the boats and none of the Jetskis even slowed down as they passed. After a while the winds slowed down and I was making good speed. Just as I approached the train trestle a train went over and when I looked over my shoulder found another kayaker pulling up next to me. He was practicing for adventure racing and had just gotten his Aquaterra to improve his paddling skills. We chatted all the way back to Scots Landing. I landed a little after 5:00, so it had been a pretty long day. This made it just that much more depressing when I carried my gear up to the car and found my rear tire flat. Fortunately the owner of the country store came to my rescue with an air tank and we were able to get enough air in the tire to get me home.

I really liked this river and felt it was very pretty compared to some of the rivers I've been on. One thing that was different though, was that I saw almost no wildlife. No turtle, no gators and very few birds and fish.

When the water gets a little higher I'm planning a camping trip from McClenny to Scots Landing.

There is a parking lot there and a country store. Looks like there is a camp ground next door.

Scots Landing - Take US 301/US 1 north from Hilliard about 8 miles. Turn right (east) on Lake Hampton Rd. (also Colas Ferry Rd) just before bridge into Georgia. Go about .75 miles and turn left onto dirt road names Scot Landing. Landing is on the Florida side.