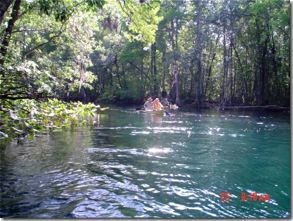 Air Temperature and Weather Conditions At the time of Put-in the temps were mid 80s with mostly clear skies no rain but some clouds. As the day progressed temps reached low 90s. Humidity was very low. The cloud cover provided welcomed relief from the sun. Considering the time of year and effort level, a 9AM or earlier Put-In is recommended.

The River and Terrain: Starting at Ray Wayside Park, you paddle on a narrow channel that was perhaps 200 yards long with no current. The channel ends and you paddle right into the Silver River (a left brings you to the Ocklawaha - trips for June and July 2004). The mild to strongly mild (3 MPH) current became an immediate factor. While not impossible to paddle, the five mile trip to the Silver Springs became a steadily increasing effort. Our joke was that the trip was 10 miles, 7 of which was against the current, it felt that way. The river was not overly wide at any point, nor did it narrow greatly. River depth varied from a foot or two to perhaps 30 feet around some of the boils. The Silver River is bordered by the Ocala National Forest, Silver Springs State Park and the now privately owned attraction area of Silver Springs. As a result, there were no signs of civilization and because of water and land restrictions, the river and shoreline is in a wild and pristine condition. Because our trips are made on Tuesdays, we only encountered a few (3 or 4) privately owned motorboats on the water and they are limited by the No-Wake restrictions. However, the gasoline fumes of passing boats were an annoyance. We can only imagine that motorboat traffic on weekends would be a problem and great annoyance. 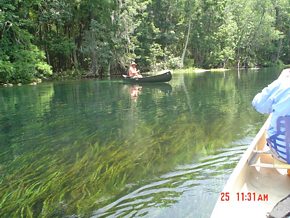 There are restrictions on fishing and swimming as well as beaching boats within the boundaries of the Silver Springs attractions. Once within their boundaries, we encountered their Glass-Bottomed and other sightseeing boats. Some members remarked that it felt strange to be in that area from the viewpoint of a kayak or canoe. Silver River is spring fed and the nearer we paddled to the springs the clearer the water became until it appeared to have the clarity of glass.

There were no navigational or paddling hazards to content with. The channel is clearly definable with no points of confusion. The return trip was effortless and gave all a chance to relax and enjoy the passing scenery and wildlife.

Note: A club member, just prior to the trip expressed concern that there might not be places to pull-in on the river for rest stops. There is a pull-in at the Silver River State Park, but it is temporarily closed and should open in August 2004. However, we did see clearings for small groups or individual boats to pull in.

Wildlife Sightings: Otters and Gators and Monkeys Oh My!! We saw them all and then some. We were aware that we were not in Kansas but in some tropical jungle. Where else, can you paddle and watch monkeys drink from the water not more than 20 feet from you or observe two five-foot alligators splash in the water, head towards you, turn and kick in their afterburner just 15 feet away as they eye you for about 5 minutes. It suddenly hits you that you are not in a zoo or amusement park and that there are no cages or trainers to protect you, what a rush! And thats not to down-play the thrill of seeing otters playing in the water and birds soaring inches above the water while Snake birds dive into the water and swim under your boat and small families of Wood Ducks paddle by. Or to look into the clear water and see schools of fish to include bass and the formidable four-foot Alligator Gar.

Difficulty Rating: I rate this paddle as moderately difficult because of the effort of the paddle against the current for 5 miles (half the trip). That almost all the members did the entire roundtrip is a tribute to their conditioning as well as love of the sport. A guy on one of the private motorboats that passed us, bet our group that less than half of us not would complete the trip - he owes us a beer.

Enjoyment Rating: This was a beautiful river that offers so much to enjoy, and that made it worth the effort.

Rays Park charges a $3 vehicle entrance fee. There is a booth at the park entrance that was closed when we arrived. On a post by the booth was a drop box with envelopes for the fee. The park was clean, offered ample parking and had reasonably clean restrooms. Note: POVs should not park in spaces marked for cars with boat trailers.

The Put-In, Rays Wayside Park is approximately 12 miles east of Ocala on SR 40. There is a brown sign marking the park, it on the right and just before a bridge over the Ocklawaha River.