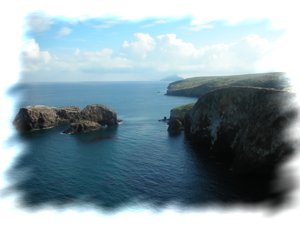 This wont be a normal trip report. They never are whenever I venture out with Tim Keen. He challenges me takes the trip to an extra level. And I, the gracious friend in tow, always attempt to rise for it. Because in the extraordinariness of my time spent with Tim is where I find solace and completeness. Any time he ambles into my scope I am always grateful for the outcome.

For a quick description, I would say that I am an ex-soccer-mom with a wistful, adventurous spirit. Tim, on the other hand, is John Muir reincarnated. In fact, he chose California as a winter destination this year because he missed out on summer in 2008 for his preference to paddle a remote section of the Arctic for six weeks. See the 2009 edition of Kayak Touring Magazine for a partial trip explanation. Youll see Tims smiling, rifle toting, arctic entrenched presence on page 16 of that issue.

The last thing he said to me in June, when I saw him in Tennessee, me en-route for relocation back to Southern California, he momentarily content in the A-frame home he designed and built on 10 wooded acres, was this: "Sheri Belling, rest assured I will NEVER come to visit you in Southern California." Famous Last Words.

He was forgetting that California has some of the rarest and most special land features in the world, and that even on the outskirts of a city as densely populated as Los Angeles you can still find peace, remoteness, and a break from the crowds in secluded and wonderful landscapes. The Channel Islands eventually beckoned him from across the country; and we both enjoyed an awesome extended weekend, winter camping & paddling, California style. 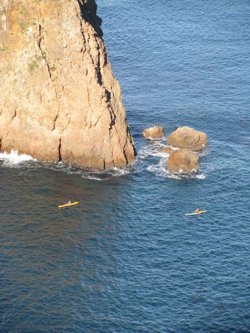 We boarded the Island Packers Ferry out of Ventura Harbor on New Years Day 2009. Our Dagger kayaks and camping gear were loaded, and with the wind at our face (because if we sat inside we most certainly risked nausea) we motored across the channel on the double-hulled vessel, bound for Santa Cruz Island. Pods of playful common dolphin escorted us along the way. Pelicans dived voraciously into the water, searching for breakfast. We would also enjoy the sightings of several female gray whales in migration during our journey back nearly three days later.

Our primary goal was to paddle caves and after arriving at Scorpion Cove and setting up our campsite, we entered our kayaks determined to scale the island counter clockwise as far as time would allow us. We paddled towards the north facing side of the island, where we encountered challenging Pacific swells and enticing caves inviting us into their world.

The color of the water in the shadow of the caves was indescribable. Imagine peacock blue mixed with deep purple. Fabulous! In direct sunshine, of which we encountered very little, the water was more like the dominant turquoise/aquamarine green classically associated with the ocean, but nonetheless beautiful.

The caves themselves seemed to breathe with their own life movement of the water encouraged by the ebb and flow of the tidal currents resonated with sound and motion. As the floor of the cave raised its ceiling lowered. Being inside, this wonderful swelling and exhaling, the spits and puffs, each living cave called us, welcomed us, surrounded us, and made us a part of itself for the duration of our time there. Bright orange starfish hugged the cliff sides, purple sea urchin and green anemones dotted the sea floor, and curious sea lions poked their noses up out of kelp beds, adding to the caves innate life experience.

Though it sounds benign, paddling within the caves was anything but gentle. The north side of the island was especially demanding for the swells and currents and the greater Pacific exposure it is continually influenced by. The barnacled cave walls and rocky ceilings were severe and tore at our skin when we tried to fit through difficult or narrow areas. Currents meeting rocks outside the caves made for calculating and challenging paddling inside them. I would not recommend the inner caves to everyone. Some that Tim chose to enter I preferred to monitor from a safe distance (remember, John Muir vs. ex soccer mom.). Its all about understanding your own limitations and being okay with them too. Its good to enjoy a new experience even better to live to tell about it. The caves were definitely to be respected. 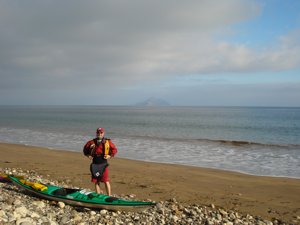 During the first days paddle we reached Potato Harbor. The beach was strewn with round stones and rocks, many of which sported unique veins of white stone within them. The second day we paddled clockwise for southern exposure and gentler seas. We reached the beach at Smugglers Cove and brought the kayaks up to shore for a brief rest. Here we saw a deserted ranch house and the loveliest orange tree one could ever hope to find. The fresh citrus we enjoyed (poached) that day was a welcome addition to our carb-laden rice and cheese diners!

The stars we viewed from Santa Cruz Island were many, and best visible from the islands pier, though only during a small window of time each evening before the fog returned. One evening as we walked to the pier we had the good fortune to witness a shooting star, the longest I have EVER seen. The star completely arched the sky, from one side to its absolute opposite. The star seemed to sizzle and send off sparks at the end. I thought we might see it land in the Pacific, but it finally burnt out, leaving us both in total awe.

Three dominant oil rigs lit up the night-time ocean like decorated holiday trees. We spied them from the park bench at the foot of the pier. Please understand, the back of Tims diesel Dodge pick-up truck bears a bumper sticker touting, "Carbon Footprint This." But dont let that fool you. Hes really an environmentalist at heart. At the sight of the oil rigs he stated, "I kind of wish those werent there. People dont want drilling in their back yard, but theyre not willing to change their lifestyle either." Tims conservative lifestyle is a testament to his willingness to be kind to the planet. Its always best to take care of the places you consider your playground.

The Channel Islands are sometimes referred to as, "The Galapagos of the Americas." Some of the native plants and animals have experienced evolutionary changes that make them different from similar plants and animals found along Californias mainland coast. Its one of the reasons the islands have received special attention from environmentally conscious organizations such as The Nature Conservancy. Our campsite was visited by a small skunk-like fellow, later identified as a spotted skunk, though much different looking from his cousin, the striped skunk, more common in mainland California. The animal was smaller and primarily white, adorned with black spots that resembled groupings of two short parallel lines on several places of its body. He was a rather cute and cuddly looking little fellow.

I havent even begun to explain the history of the island, but remains of Chumash Indian settlements have been found, and more recently within the past one-hundred years the island has been host to significant farming and agriculture production. The park is currently under the watchful eye of the National Park Service combined with efforts by The Nature Conservancy to restore the island to its pristine and native flora and fauna once again. Most of the non-indigenous species of animals have been removed from the island.

We also hiked to the top of the bluffs, and upon reaching them, realized it would be difficult to resist breaking into song "The Hills are Alive" Sing it, Julie Andrews. Park service rangers noted that the hills are only green during the winter months that the grasses used in the past for grazing animals would be brown all summer long. We enjoyed scented sages, lichens firmly attached to north facing rocks, and a sampling of non-natives plant species as well.

I took many pictures during my stay at Santa Cruz Island, but none captured the essence of the island better than my pen could I figured thank you Ranger Randy for the loan of it. I meant to return it, really I did!

A page from my notes read: "Its Saturday, and I havent bathed since Wednesday morning. Ive been showered by a couple of salt water waves, taken during landing and take-off from shore while kayaking, but I really dont feel the worse for wear. The tools for contentment are all here."

"Sea lions poke their sea-dog faces out of the kelp beds, observing us curiously and playfully. They are the spirit of the Pacific they lend life to the shores. Pelicans sleeping on rocky shores look like little old men their white, spiky-feathered heads cocked, chins curved, and beaks tucked peacefully under. Their gentle sleeping presence makes an interesting alternate depiction from their skyward attack into the sea for sustenance."

I cant thank my dear friend Tim enough for coming to visit. He broadens my horizons and Im deeply grateful for his friendship and company. Im always happiest whenever he introduces me to some of the little known corners of the world where he likes to play.

Camping or Hotel in Ventura

Camping only on Santa Cruz Island