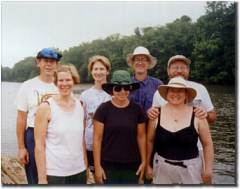 The Roanoke R. and adjoining creeks slowly wind through the bottomland forests and cypress/tupelo swamps of the Roanoke R. Nat'l Wildlife Refuge and vicinity. This area supports thousands of migratory waterfowl, and other birds, and is home to numerous species of fish and mammals. To show the ecological significance of the region, the Nature Conservancy, the N.C. Wildlife Resources Commission and the N.C. Dept. of the Environment and Natural Resources have partnered with several corporations and government entities in order to provide optimum management. Roanoke R. Partners (a non-profit, 501-c-3 organization) is providing some assistance in this management, also.
On the weekend of 8/18/01, I led a group of Sierra Club members on a canoe-camping trip, spending Sat. night at the Barred Owl Roost camping platform, located at the head of Lower Deadwater Creek.

We put in at Williamston just after noon, despite threatening skies and reports of bad weather. From here to the western (closest to Williamston) entrance of Devil's Gut, the Roanoke is wide and deep--although virtually undeveloped. So, after this 2 3/4 hours of paddling, we turned into the Gut (the creek which bisects the bottomland forest/swamp created by the Roanoke and its huge horseshoe-shaped bend--flowing down to Jamesville,) and we paddled for another hour before reaching the confluence of Gardener Creek (which meanders from Roberson's Marina, a popular put-in for fishermen and for platform campers.) A landmark on the right bank is an old fishing shack. In less than 1/4 hour, we reached Upper Deadwater Creek (location of the Beaver Lodge platform.) Another 3/4 hour of paddling, and we reached our platform. Both are 20' x 20', have multi-level access stops, a portable privy, but NO rails (even though 5-6 ft. above the water) or roofs. 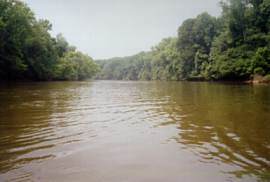 Our platform, Barred Owl Roost, was named so because some of the birds land and roost on the posts. We heard many owls & herons during the night, but none on the platform. We did see, however, many mosquitoes (those planning a trip might want to schedule in spring or fall, unless don't mind using lots of repellant or having a high tolerance for insects.) Plenty of deer flies during the day, too.

Another consideration in the summer: thunderstorms. We were lucky in regards to the weather. Only a couple of light showers hit us during Sat. afternoon paddling, but no storms. Another shower descended upon us just as we reached the platform, & set up our tents. During Sat. night/Sun. A.M., several thunderstorms with heavy rain passed over us--I estimate we received 5 inches; and we had a lot of close-by lightning and thunder.

On trip, camped on raised platforms in swamp (reservations MUST be made: Roberson's Marina, 252-792-3583.) When staying overnight before starting trip, there are a few local motels in Williamston & nearby, such as Holiday Inn, Comfort Inn, Days Inn, Econo Lodge, etc.

Maps: U.S.G.S topo maps of the area, along with ones privately developed for the Roanoke R. Canoe/Kayak Trail. Book: A Paddler's Guide to Eastern N.C. by Bob Benner & Tom McCloud