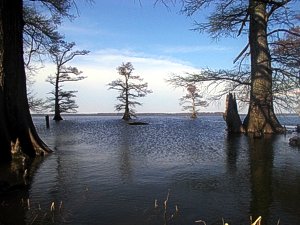 The first full week in April I went up and over to Reelfoot Lake which is located in the far northwest corner of Tennessee near the Kentucky state line.

Reelfoot Lake was formed during an earthquake in the early 1800's which reportedly uplifted the Mississippi River long enough to send a wave of water east to what is now the lake. It also has an interesting cultural history as well that is worth reading about.

I camped at the Air Park primitive campground at the northwest end (with electricity, water, and heated water at the bathhouse that had showers and toilets) but during my stay there was no one there, quite peaceful. The locals say that it gets busier during the weekends.

The lake itself is sort of a combination of several lakes connected by partitions of bald cypress trees. This lake is also a popular fishing spot for crappie and bass. It's called the Air Park campground because there is an air strip there for small planes that is infrequently used.

The first full day I paddled a little over 8 miles with winds gusting to 20 mph but I generally stayed close to shore with no problems. There is at least one other state campground on the south side. There were a few speeding bass boats to watch for, especially in the channels, but for the most part the fishing was relaxed. There is a lot of duck hunting during the fall from floating duck blinds scattered around the lake. That wouldn't be a good time to paddle.

The Air Park visitor's pavilion is being torn down because of a fire. It must has been quite nice at one time. The Air Park campground was not affected.

There are several ramps around the perimeter of the lake. The first day I saw a bald eagle diving for fish, very cool. There were coyotes, owls making their business known at night and lots of birds during the morning and evening. There were also deer tracks, armadillos, king snakes, red winged blackbirds, and beaver to be seen. One local said he had seen bobcat also.

The second day I drove over to the east side of the lake to paddle on a self guided paddling tour maintained by the Federal Fish and Wildlife Service. The 5 mile Glory Hole Trail, as it is named, was well marked and had stations around the water trail highlighting flora and fauna that can be seen there. There is another trail near there but didn't get to it.

At what is now the state park main pavilion at the south end there is a bald eagle interpretive talk and live bald eagles, owls, and hawks in aviaries there. There were several restaurants if one wanted to eat out and a few hotels there. There will be mosquitoes during the summer but were almost non-existent during my visit. 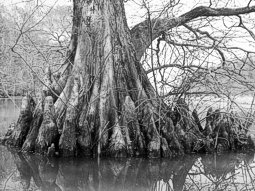 You don't get to see many big bald cypress trees on my side of the state and there are lots of these at Reelfoot Lake. The trees and their "knees" may remind you of swamps further south but this is not swampy water. I picked my way through these trees fairly easily even though my boat is 17 feet long.

Cell phone service is poor in the area and highly positional. You can have a cell signal and lose it by walking a few feet. Texting seemed to work the best.

The summer is probably buggy but the lake is worth the trip.

The Air Park primitive campground had about 15 campsites with water, fire pits and raised campsites with electricity including 1 bath house and hot water.

Camping at the south end of the park might have a few more accommodations...

Primitive camping is about $10 per night.

Northwest Tennessee, about 2 hours north of I-40, rural Tennessee. The local roads are good.

I used GPS while paddling. There are maps available at the park.