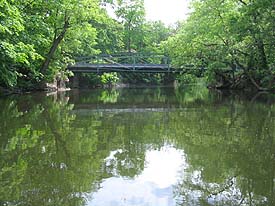 This generally is an easy trip with a few difficult spots. We put in behind the NY/NJ Trail Conference offices at 156 Ramapo Valley Road, a popular starting point. Its best to walk your boat downstream a few hundred feet to avoid the falls just past the parking area.

For the first mile after put-in you don't leave the sounds of civilization behind, as the route follows close to Ramapo Valley Rd and passes under Route 17 and Route 287. Soon the sounds of traffic fade into the distance. The river here is narrow and has many twists and turns. About a mile into the trip we reached the first obstacle, which was a pair of strainers that fell at a sharp bend on the river. They come up quickly, so luckily for us the water was not flowing very fast. They could be very dangerous if the water is faster as you can be on them before you have time to react.

I pulled over and scouted a route around. I was disgusted to see a sandbar that was littered with thousands of soda bottles and balls of every type. Soccer, tennis, basketball, you name it. It seems that everything that washes into the river winds up stuck at this bend. We determined that we could paddle around the first strainer, to the opposite (right) shore and carry around the next tree, which was only 50 feet upstream.

Shortly after this point the river widens a bit and slows down. At about 3 miles it widens into a lake, then narrows again and heads into one of most scenic stretches, as it passes through heavy forest and occasional farmland. There are few clues that you are in the middle of the most densely populated counties in the most densely populated state in the country. At certain points we had to dodge trout fishermen wading in the stream but there is usually enough room to maneuver around them.

After passing through Ramapo Valley County Reservation, which you can pick out because of all the people, you then pass under historic Cleveland Bridge. Built in 1888 its the oldest lenticular truss bridge in NJ and one of the few left in the US that still carries traffic.

At about 5 miles the river reaches a dam with a drop of about 3 feet. A well worn plywood sign on a private bridge warns you of its approach. It probably could be negotiated by a skilled paddler, but we carried over a well worn portage on the left.

Soon the river passes a string of lovely multi million dollar estates on the right, with dense woods hugging the shore on the left side. Another two miles brings you to an island. We made a mistake and went left where we encountered another dam, this one much higher than the last. The only portage was on the other side of the island so we had to paddle back upstream and around. Its private property here, but they seem to have no problem with paddlers carrying past the dam.

The river gets a bit shallower now and we were bottoming out from time to time, but it's still very scenic. The river at times passes near Route 202 and you can hear the automobiles but it often moves away, leaving the sounds behind.

You start seeing more homes in this stretch, but the scenery is still striking as the river passes through the Ramapo Mountains.

At about 9 miles the scenery becomes more suburban as homes hug the side of the river. It gets wide and shallow here and you have to pay attention, lest you get hung up on sandbars and rocks. Some people pull out before this stretch to avoid this area. A mile further you pass through center of the town of Oakland. There are some possible take outs here as well, but we continued on, being that we were parked at the Doty Rd bridge. This area is the least appealing part of the river as it passes by ramshackle homes and the shore is dotted with makeshift walls and the riverbanks are piled with boulders laid by the Army Corps of Engineers. Nothing natural looking at all here.

About a half mile before the takeout you come to a lake with a large concrete dam at its entrance. The map shows the river going around the lake to the right, but the map is wrong, as there is narrow canal to the left that will get you around the dam and lake. It's only about 5 feet wide here and the mosquitoes are in full attack mode, so it may be better to carry over the dam and take the lake route.

Once the river becomes a river again its a few hundred yards to the takeout at the Doty Road Bridge.