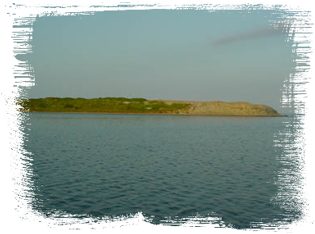 From Silver Lake in the quaint village of Ocracoke, you can see Portsmouth Island off to the south across the Ocracoke Inlet and vast Pamlico Sound. Although there are no human residents on Portsmouth, remnants of an abandoned fishing village remain on the island and are maintained by the National Parks system. There are no modern services on the island such as water or electric and the island is accessible only by boat. Primitive camping is allowed anywhere on the island except within 100 ft of any structure. Ever since getting a glimpse of Portsmouth Island on my first visit to Ocracoke, Ive wanted to paddle there. And so the story begins..

After all my planning, 4 adventurous members of my NJ kayak club, Jersey Shore Sea Kayak Association committed to the trip. After a few days of paddling near Nags Head on the Outer Banks, we headed south on Rt 12 to the ferry terminal that would take us and our kayaks from Hatteras to the small island of Ocracoke. From the ferry terminal we would then have another 15 mile drive to the south end of Ocracoke where we would then prepare our kayaks and gear for the launch to Portmouth Island.

Once we arrived to the launch site, we spent about 45 minutes loading up all our gear for the overnight camping. It was exciting to see Portsmouth Island about 4-5 miles in the distance before we launched. We launched into the Pamlico sound at 9:20 am with more than enough time to paddle 3 miles to the Ocracoke Inlet for slack tide. We could not ask for more perfect conditions. There was a very slight breeze from the south, and not a cloud in the sky. The sun was shining bright and air temperatures were in the 80s with a comfortable humidity level. Shortly after launching, we quickly neared the channel for Silver Lake where the Cedar Island Ferry was just pulling out. We let the ferry pass as people on the ferry pointed, took pictures and waved at us. After paddling a few miles we landed at a beach where the Pamlico Sound rounds out to the ocean. The area was filled with trucks and fisherman so we landed on the beach to scout around a bit before the tide changed. After about 30 minutes, I rounded up the crew and we departed the beach at Ocracoke, taking full advantage of a slack tide and the great conditions to cross the inlet over to Portsmouth Island. Although we had prepared ourselves for possible rough, turbulent waters, the inlet crossing was uneventful. There was no wind which kept the slack water calm and flat. Some occasional rollers coming in from the great Atlantic made the paddle to Portsmouth very enjoyable.

It felt like a summer day, but I reminded myself it was October. As our kayaks approached the Portsmouth shoreline, we could see some RVs on the beach there and a few ATVs which get ferried over to the island on occasion. As I scouted the waters, the water out into the ocean looked very navigable and everyone was comfortable with proceeding. Instead of landing on the sound side of the island which was more prone to bugs we decided to land on the ocean side to set up camp. Avoiding a few areas of breakers in the distance, we headed up the coast of Portsmouth passing a few RVs on the shore until we spotted our own isolated piece of beach. We all made very easy surf landings in the calm ocean at Portsmouth Island at around 12 noon. 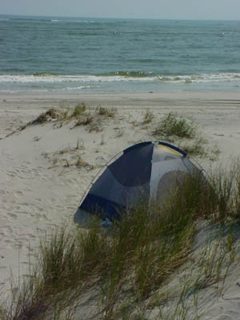 Once we landed, we scouted the area and found a few large sand dunes above the high tide line which appeared to be perfect to set up a tent. Since it was likely there would be more mosquitoes in areas more sheltered to the wind, we intentionally chose areas which were largely open to the wind to set up our tents. Instead of carrying 3 ft sand stakes to secure our tents on the beach, we chose to bring empty plastic bags which packed more easily. We secured our tents from the wind by filling the bags with sand and securing them to the tent stake loops.

The dunes where we set up our tents offered panoramic vistas of the island topography in addition to unobstructed views of both the Pamlico Sound and the Atlantic Ocean. From our dunes we had a great view of the seemingly vast and desolate mud and sand flat which separated our side of Portsmouth Island with the more forested sound side. Across the mile long sand flat in the forested area were remnants of the old fishing village and we could see a church spire sticking out above the trees. In addition to the abandoned village, the other wind sheltered and forested side of the island was also, most likely, home to many more mosquitoes. The low winds and tide levels predicted for our stay would keep ocean from filling the flats, allowing us to hike across the area to the village if we wanted to. The guidebook I had however, recommended paddling around to the village from the beach side as it was a long muddy hike, and the area beyond the mudflats was filled with ticks, chiggers and mosquitoes. The thought of this abandoned village on the other side of the island across the mudflats intrigued me, and I frequently scouted the area with binoculars from my dune.

The heat of the sun on the island grew more intense in the afternoon so we decided to take a nice cool swim in the ocean after our campsite was set up. We stayed in the water for quite some time and this part of our island stay was very relaxing and refreshing. It felt like a tropical vacation. While taking a hike in the mudflats I noticed some raccoon and fox tracks in addition to some nice pieces of driftwood that I dragged back to the campsite in preparation for an evening campfire. I didnt hike too far into the flats as the mosquitoes and gnats started their vicious attack after just a short hike.

As we prepared for dinner, we watched a fantastic sunset over the sandflats. The wind died down and the mosquitoes quickly began to swarm in. Although we loaded ourselves with Deet, the little buggers were persistent and were able to find even the smallest of areas of our bodies which were not covered with the repellant. If you werent fullyand I mean fully covered in Deet, they found the uncovered areas like they had radar and drained your blood. As we boiled water for our pasta dinners, we joked about making mosquito stew as some of the little buggers ended up in our boiling dinner water. As it got dark, we hung a propane lantern on a post for light and had a nice campfire going on the beach. We ate dinner together and chatted on the beach while sitting on our kayaks near the light of the lantern and the glow of the campfire. After dinner we cooked Jiffy-Pop popcorn on the propane stove and roasted marshmallows on the campfire. After a few hours of relaxing conversation, we all retired to our tents and fell asleep to the gentle roar of the Atlantic Ocean surf. 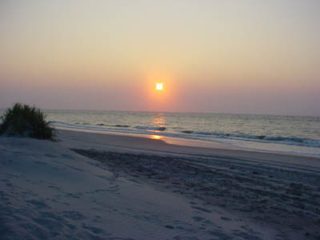 I awoke at the crack of dawn and peered out the window of my tent to watch the sunrise over the Atlantic. The sun rose over the horizon of a beautiful and relatively flat Atlantic as we absorbed the sound of a gentle rolling surf. Although it was not even 8 am, it was already hot and somewhat humid. There were hundred of mosquitoes on the window netting outside my tent so I sprayed myself with DEET and prepared for exiting. I knew the blood thirsty little buggers would soon be attempting to drain my vital bright red hemoglobin as if it were some cranberry juice breakfast cocktail.

Although it was warm, I wore sweatpants, a long sleeve shirt, and wool socks with my sandals to protect myself from the pesky mosquitoes. I also covered myself in DEET from head to toe before I slipped out of my tent. They swarmed around my face and arms and a few even bit through my sweatpants, shirt and thick wool socks. For the most part, the DEET worked though. As we congregated for breakfast down by the beach and the sun rose higher in the morning sky, the pests gradually disappeared. Most of the crew started with their morning java and we boiled water to eat instant oatmeal before starting to break down our camp.

After our gear was all packed we departed Portsmouth Island a bit earlier than expected and fought the end of a somewhat strong outgoing tide as we made our way into the Ocracoke Inlet toward the Pamlico Sound. We had planned to paddle around to the other side of the island to view the remnants of the fishing village however after a brief landing and severe onslaught of mosquitoes and biting gnats, we decided to pass on the village and just start paddling back to Ocracoke. It was very clear to us why the fishing village was abandoned! We were soon on a course across the inlet back to our landing in Ocracoke which was about 5 miles away. The suns heat grew more intense as we paddled to coast of Ocracoke. The humidity was still high and there was a light haze which prevented us from seeing the western shore of the Pamlico Sound. When we looked to the west, the haze made it seem as if we were looking into infinity. It was somewhat surreal. As we grew hotter, paddling in the middle of the shallow sound, we dunked our hats in the water to keep cool every few hundred yards. We sweated profusely and I knew we needed to drink lots of water even if we werent thirsty. These were the conditions which had the potential to dehydrate us very fast. Our pace slowed significantly as the heat quickly drained our vital energies. A few of us grunted and groaned about the heat on a few occasions. After only a few miles of paddling in the intense heat, we were glad to finally land at Ocracoke.

After we landed back at Ocracoke, we made our way to Howards Pub a few miles down the road for a relaxing early dinner and some ice cold refreshments. We knew the ferry from Ocracoke to Hatteras ran every half hour so we didnt need to rush out of Howards. After capping off a very nice dinner at Howards we made our way back to the As the ferry departed and we watched the small island of Ocracoke fade off into the distance, the sun set over the Pamlico Sound and cast vibrant hues of orange, purple and pink in the sky above us. This spectacular sunset and fresh sea air surrounded us and combined to produce a revitalizing energy which was easily absorbed by all on their way back to Hatteras. It was a great ending to our awesome camping trip on Portsmouth Island.

There are NO services on Portsmouth Island.

Guide to Sea Kayaking in North Carolina: The Best Day Trips and Tours from Currituck to Cape Fear by Pam Malec