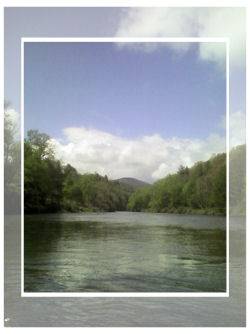 The South Fork of the New River starts as a mere trickle of water when it leaves Blowing Rock, NC heading north toward Boone. The river winds alongside Highway 321 and gradually increases in size. By the time the river flows through the outskirts of the small town of Boone, NC the river is about twenty feet wide and averages two feet in depth.

Bishop Garnett and myself, Eric Crews, set out on a beautiful, blue sky day in early May to explore the upper-most navigable section of the South Fork of the New River. We set up our take-out point at Castleford Road near the town of Todd, NC and spoke with an employee of Wahoo's Rafting Company who confirmed my belief that the ten plus miles of paddling would take around five hours to float.

At the put-in point near Brookshire Park on Highway 421 near Bamboo Road in Boone we shoved off from the grassy bank into the clear, cold water. We paddled an Old Town Discovery 158 with bow and stern float bags and drew around five inches of water.

Immediately it was evident that this section of river would be technical paddling at its utmost. Throughout the early miles there were the expected snags involved with paddling low cfs rivers (the S. fork flows @ 300+/- c.f.s.) such as downed trees, river-wide rock ledges, gravel shoals, and the occasional electric fence. There are no low-water bridges that I could recall and, as of early spring 2007, there were no river-wide strainers that would have to be portaged at higher water.

The river takes a beautiful path through rugged mountains and rural farmland of the Blue Ridge Mountains. The trip is scenic and the wilderness feeling is there for the majority of the trip. There are small country roads that run adjacent to the river and houses are few and far between. There are many miles of dense forest where the dogwoods, pink rhododendrons, and numerous wildflowers were blooming. 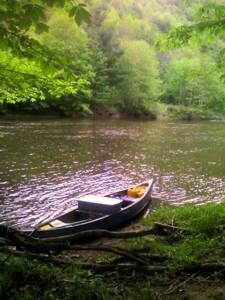 We stopped off at an island around the midway point and drank a cold beer beneath the warm sun. There were a few Canadian Geese with young'ens swimming around in the thickets growing alongside the river's edge. The sun was still high in the western sky but we decided to push on toward the finish.

Naturally, at about three hours into the float, we assumed that we were nearing Castleford. We had been paddling steadily through the shallow waters and I thought we were on about a three m.p.h. pace. I must have been wrong because soon the sun was slinking down into the horizon and Castleford was nowhere to be seen.

Right at dusk a few houses with their porch lights glowing appeared ahead in the distance. Bishop and I joked about knocking on their front door and asking for a slice of cornbread (we were traveling fast and light). We paddled steadily on-now digging long strokes in the deeper water and really getting it, we saw a fisherman casting from the grassy bank in front of a house. We slowed the boat and asked him how much further and he estimated that we had four miles yet to go before Castleford. I laughed, what else could I do? Bishop said something like, "I always heard paddling at night was one of the best things you could do." I didn't expect to do it tonight though, that's certain.

We paddled on and rarely spoke to one another. The night was quiet and the warm spring air was heavy with humidity. The stars were shining brightly and the lights of the houses in the forests glowed through the trees. A full moon gradually rose in the southeastern sky and cast a silvery slant over the riffles and waves in the river. Ahead of us in the night the large concrete bridge at Castleford loomed up out of the darkness. We caught the eddy on river right and slid the boat up onto the sandy beach.

We stood out there on the beach at the river's edge and cracked another beer. We each raised our bottle to the full moon and the river, cheers to a good float.


Overall, the trip is a great addition to the paddling opportunities that exist near Boone. Though the river was very low due to recent drought conditions it was still navigable with careful line selection. There are many rocks in the river that cause relatively nice wave trains to develop and I think that at higher water the run would be quite classic at sustained strong Class I.

In reviewing the satellite images at Yahoo Maps that I use for trip planning, I concluded that the trip was more likely 13 miles or so. We put on at two-thirty and took out at around ten o'clock p.m. We stopped off for almost an hour midway, but aside from that paddled consistently.

Note: Beware of the Electric Fence two to four miles into the float. There is a cow pasture on the river left near a grove of sycamore trees.

For further questions about Boone, NC area paddling feel free to send me an email (just click on my UserID at top of this report).

Wahoo's offers a shuttle service in the area for a very reasonable fee.

Take Hwy. 421 back to Boone. At New Market Center take Right onto Hwy. 194. After a distance of ten miles (or so) there is a fairly obscured road leading up and right named Castleford Road. Follow Castleford Road for three winding North Carolina country miles to the large concrete bridge at the intersection of CastleFord and River Rd. (Take-out)

***Alternate Take-out that adds an additional six miles to the trip is one mile further along Castleford Road at the Todd Community Park. (There is a mandatory portage over a dilapidated bridge midway, Wahoo's New River Outfitter location is on River Left at four miles)

Yahoo Maps is a very adequate resource. Combine the satellite imagery with the street map to get a composite that offers incredible detail down to individual rapids.