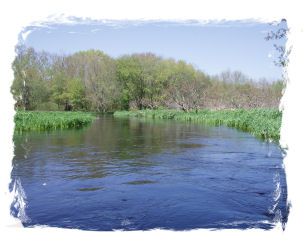 Since my kayak was a Mother's Day gift a few years back, I decided that Mother's Day this year would be the perfect time to take it out for the first paddle of the spring. We had just a short amount of time, so after the kayaks were loaded, we headed to nearby Middleboro and the Nemasket River. After reading other reports, we decided to try to find a spot to put in where we wouldn't need to portage. It was fairly easy to locate an easy put-in spot off of Wareham Street just east of Middleboro Center. It was a Sunday morning, so there were plenty of spots in the parking area. Of course, the other reason there was plenty of parking was because there were 15-25 mph sustained winds, and the river and current were running high and fast after nearly a week of rain.

We quickly learned that the upstream paddle was going to be strenuous, and there would not be much opportunity for a leisurely paddle as we battled the currents. The sides of the river were surrounded by tall grass, though, so we were able to pull just inside the grass for a quick stop, if needed. This portion of the river, heading toward South Middleboro and Lakeville is largely uninhabited (along the river). We only saw one or two houses, and a few businesses as we crossed under Route 28. This part of the paddle took about 15 minutes. Moving farther up the river, just past Route 495 took another 25 minutes. Of course, I am a 49 year old mother - and not your typical athlete.

This particular day was clear and sunny, so the shores and grass were packed with painted turtles sunning themselves. The red-winged blackbirds followed us the whole route. There were at least three sets of nesting Canada Goose. There was also a rather aggressive flock of pigeons who were not pleased with us as we passed under 495.

The whole route (up and back) took us less than an hour and a quarter. The trip back was fun - if you paddled, you could get going pretty fast with the current.

NOTE: You must pull out at the lot where you put in as there is a dam and waterfall on the other side of Wareham Street. I would very much like to try this paddle again to see if there might be less of a current on another day -perhaps later in the summer. I'd also like to try to go farther up the river to see what lies beyond...

There is a herring run across the way, but no facilities noted.

From Route 495: Take exit 4 and head toward Middleboro Center. At the 2nd light, go right onto Wareham Street. Travel just under a mile, and you will pass over the river. Take a right onto Sylvan Road. There are some parking spots adjacent to the put-in spot.