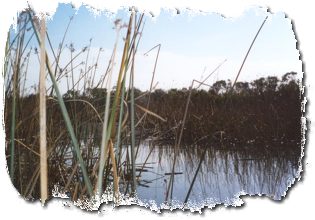 Bull Island on the Napa River, CA across from the Cuttings Wharf launch does exist and can be a fun trip IF the tide is right! On my old topographical map, the waterway around Bull Island is identified as Steamboat Slough and appears deceptively wide and accessible; but it isn't. In this photo, the northern entrance to Bull Island is barely visible just to the left of pier pilings as a lower area of weeds up and across the river.

At 1:25PM, kayak and I found what appeared to be an opening in the reeds and weeds just about 100 yards upriver and on the opposite side of the Napa River from the Cuttings Wharf launch.

Kayak and I proceeded into the reedy area, which appeared murky as though it may be shallow; but, frequent paddle dipping indicated at least 4 feet of water or more (since I was never able to touch bottom mud). The waterway was narrow with wet and muddy reeds on both sides within 3 to 4 feet of my kayak.

For the next 20 minutes or so of light paddling, the murky, reedy waterway continued for about 100 yards before reaching a very dead tree on the right at which point it was apparent that a bigger clearer waterway was ahead. It was very quiet with a warming sun shining through a hazy sky; but, not too hot and the temperature was very pleasant. 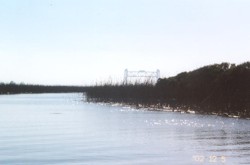 Being what we hoped would be an island, kayak and I were not surprised to paddle into what appeared to be a right turn area. And sure enough, the waterway opened up more; and although it was not quite as extreme as Charlie and Rosy Allnut coming out of the swamp on the African Queen, kayak and I were still happy to see the opening of the waterway into a very definite right hand turn. And, there in front of us was the Brazos RR bridge landmark.

After stopping to make a few notations and to photograph the spot, we headed southwesterly where Steamboat makes another turn to the right when kayak and I were heading more west then south.

You can also see cars traveling on Route 121/29 going over the George Butler overpass in the north. Probably better than shown in this photo, the cars are visible and conversely, when the tide is this high, a driver on the highway could look over and see this waterway around Bull Island.

After making the big turn to the southwest, you should see Brazos RR bridge again on your left and you will start to see the main Napa River with palm trees marking the Napa Valley Marina in the not too far distance.

There are two openings at the southern exit/entrance which both appear to be the correct entrance. It can be confusing to know which route to take; so, here's what you can do, with the Napa Valley Marina at your back looking across at the eastern side, the entrance on your right or the southern most entrance will get you to the correct waterway. Paddle up the slough about 100 yards, and you will see where the Steamboat branches, take the left turn and follow that around to the murky, reedy northern exit/entrance.

A public boat launch, restroom facilities and a small cafe/restaurant are at this site.

From Vallejo, Ca take route 29 and at southern crossing intersection take left to 121 and at next light take take left as if going to Sonoma. Watch for Cuttings Wharf left turnoff and follow this road to the public launch.

Topographical map 1986 which is misleading as to how navigable Steamboat Slough is around Bull Island.