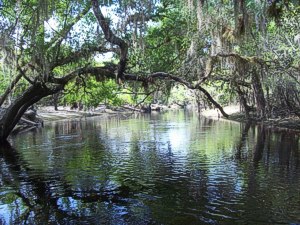 The Myakka River is a semitropical prairie river that springs forth east of Bradenton, FL and runs South approx. 50 twisty miles to Charlotte Harbor. I floated the river from Myakka City to Charlotte Harbor in late February '15. The river gauge there was around 5.5'... running well enough, not much higher than the normal minimum of 4'. My wife watched as I launched an inflatable Sea Eagle FastTrack385 at the park where highway FL70 crosses the river. She wouldn't come along. I told her to expect a phone call to get me in 3 days.

The FastTrack has a tough bottom skin and an inflatable floor so I can stand up as on a paddleboard or in a pirogue, but I usually had to sit to deal with the upcoming obstacles. It also has a 6" skeg on the back, and I had hacksawed off a couple of inches to make bouncing over logs easier. Slogging along, I used it pretty hard but it proved durable. Perhaps a plastic, easily maneuverable kayak would have been better... if one can stand in it for the better vantage point, a huge plus. I would not try that stretch of the river with a canoe.

I brought no phone, no GPS, no map except a FL highway map in plastic. I had a tent, sleeping bag, 4 tins of sardines, bread, cans, peanuts, raisins, etc. Those bladders inside wine boxes make great canteens. I brought 4 SteelReserve tallboy beers.

I had asked around to see if locals floated the river from Myakka City, but gained little knowledge, and all false. Above Myakka City the river was but a trickle through a swamp of deadfalls, dense thickets and barbed wire cattle fences across the river. I was told that there weren't any cattle fences below. 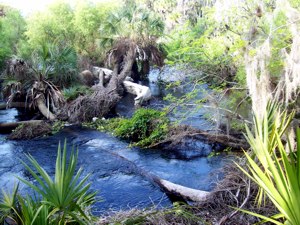 At the FL70 bridge the river was 2-3 yards across but soon constricted and twisted into more dense bush thickets and deadfalls, most which I could float/crash through/around, with mossy detritus and spiders by the dozens falling on the kayak and me... crawling all over everything with daddy longlegs little touches that I grew used to, spanish moss and unknown epiphytes I hated to disturb... but I think their whole design is to intercept flotsam such as myself so as to be carried downriver. My technique was to drift with the current around the tight little bends and, catching a quick grasp of the situation before me, paddle hard toward whatever gap, hole or escape presented itself and then fall flat to the floor and hope momentum would squeeze me through the leafy branchy viney spidery loggy constriction.

Some encounters were impassable and I had to climb up on the logs or whatever and drag the kayak over... maybe 10 times, each a precarious venture with varying degrees of success, but no outright disasters.

All day the river wended its way through dense palm trees/hardwoods and thickets, opening into cattle fields, and barbed wire crossed the river maybe a half dozen times. I was able to carefully float under a few fences, but a few more required portaging and crawling/digging/dragging under the wire. Evasive wild hawks and herons... great blue, little blue, tricolor... a few ducks, egrets, Night Herons and Bitterns, Vultures... pileated woodpeckers and songbirds were constant if furtive company.

I quit, tired, at sundown and tented on the bank by a cow pasture...no cows, many owls carrying on all night. I made a little fire - palm fronds make great kindling and yes dried cow patties burn nice and slow. A dog barked all night a half mile away... not at me. Cool and comfortable, no bugs.

Day 2
I was baptized at sunrise - the river is tea-colored and delicious - then loaded up and soon avoided one more cattle fence before the river opened into a broad wet grassy plain with a big immature bald eagle watching and deer, ducks and a sandhill crane flattened over it's nest.

The river passed under the CR780 bridge, on the North border of Myakka State Park. There is no launch site at the bridge, I guess so the Park doesn't have to patrol the pristine river, but this would be a great place to launch - it can be done, but with steep banks and fences it would not be easy.

So� above this point the river is not for everybody, but for some of us that stretch of the river, the highest, is the best part. No picnic, but the redeeming qualities make a strong argument.

Below the river changes character, opens more... still with deadfalls etc, but not like upstream. A canoe would do OK. I surprised a couple of Florida's famous feral hogs rooting on the bank, dark brown, strong and fast. A few ospreys and hawks, deer, herons and egrets and a few wood ducks and deer kept their distance.

Thickets and deadfalls were not a problem, but I slogged through a few areas where the leafy greenery growing from below was too thick to make progress except by waist-deep wading and pulling. On patrol were a few small gators up to 6' and schools of maybe 50 fish the size of footballs, moving fast.

I reached Myakka State Park's dammed-up lake at noon and paddled a couple of miles across, passing people on docks, in boats, driving RVs, very busy... first people I'd seen since Myakka City. I didn't stop and floated over the dam and on down along the river where maybe a dozen alligators, some around 10' slid into the river or slapped their tails like giant beavers. The State Park ends at highway FL72.

The river continues into a Wildlife Refuge, and 3 unavoidable signs read ENTRY BY PERMIT ONLY...no instructions for acquiring a permit and nobody around, so I just kept going...and it became primeval with the river and air opening wider in the late afternoon... with dense grasses, towering palms and moss-draped oaks... and alligators watching, sliding, sinking, splashing. 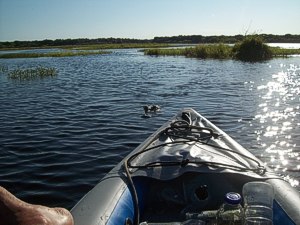 Down a little farther was a real lake (no dam) about the size of the Park lake, but empty of people. I skirted the West shore to the South end where the river resumed in a broad grassy area where they say is a hole 150' deep. Floating, I couldn't see just where it was, but in the area were dozens of alligators, big slappers who knew I was there before I knew they were there. They were usually taking action before I was within 30 yards, although I surprised some and got wet as they leaped and belly-flopped off the bank, waves rocking the kayak. One lieutenant, maybe 7' long approached me face-to-face before exploding into the depths.

They are majestic, smart and curious, very territorial with great vision and hearing. Big ones are down there - I saw maybe 12 footers, and I understand they don't have much for appetites in February. No matter... we were comfortable in our company.

With sundown near I made it a mile or two below the big hole, with gators just as thick, swimming back and forth across the grassy river 10 yd wide, silent except for sometimes bashing their tails. Little blue and tricolor herons, egrets... but in this remote interior is the Limpkin: a large brown snail-eating bird of the trees and grasses whose plaintive cry speaks of its pure vulnerability, a most precious creature living where it can, in places such as this. Listen and leave it alone.

I found a high bank with a view upstream, gators patrolling as the stars gathered. The tent went up as mosquitoes became thick, and the bug spray worked to a point. No fire in the Wildlife Refuge amid all the palms! No flames in paradise! All night silence with night birds awake like it was day, and the mosquitoes in the tent drank my blood. With sunrise I took my revenge, killing them all. I regret our encounter.

Day 3
Off at 8AM, Stand-up paddling around the fast, twisty bends, becoming more wooded with no sound but nature when I heard a motorboat coming upriver, so I ditched the boat in bushes and hoped I wouldn't be caught un-permitted in a Wildlife Refuge - fear of THE MAN!!! Upon investigation the engine noise turned out to be a downstream waterfall over a dam (whew!) that I had to portage around, but first, in an upstream pool, had baptism #2. How good to be baptized, to greet the new day, the new life. Baptism may happen in the home shower, but a pristine river is more refreshing. 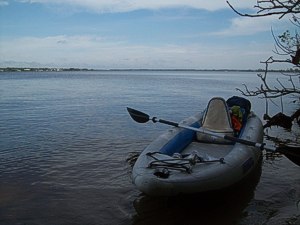 Below the dam the river gradually changed character from wild to broadening with houses and docks showing up... no longer wild. A few kayakers and a motorboat or two passed moving upstream, fishermen and sightseers. Then there were pontoon boats down by the I-75 bridge where the river became an estuary, broadening into a savanna.

I passed the US41 bridge and got directions to a place to tent for the night, and passed a Wood Stork - covered mangrove island among many such mangrove areas... but in the savanna got misguided by a buoy for a couple of miles E into North Port... when I should have gone SW.

After sundown I again crossed under US41 at North Port and realized I had gone the wrong way, and with nowhere to camp in the dark I ended up sleeping in the kayak, tied-up to the North Port public dock. The inflatable floor was comfortable, nobody saw me all night and the only problem was adjusting the lines as the tide fell. I got out of there at sunrise.

I headed back out the North Port Slough to the river, passing by a manatee and her calf, making the misdirection worthwhile. Ospreys and hawks were gracious. Through the morning the river further lost its identity as it turned into Charlotte Bay, with little blue herons and green herons in the red mangroves where I was again baptized whole in sunburned sore muscle happy weariness after a few days struggle.

Before reaching the final bridge at FL776 I encountered vast flocks of ducks wintering in the broad open water, wary of me and taking whirring wing... wonderful to hear and later dream about.