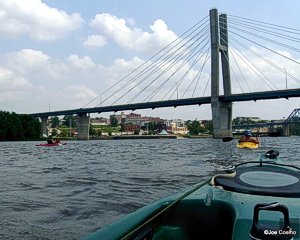 My friends Joe and Rhonda had issued an open invitation to anyone who wanted to come along on a kayaking adventure from Canton, Missouri (our home town), to Quincy, Illinois. Even though I was quite sore from two days of cutting and hauling brush, I jumped at the opportunity. I had always wanted to complete this float on the Mississippi River, but had never gotten around to it. I had done a portion of it, 6.25 miles from Canton to La Grange, MO, but this trip would require an additional 9 miles.

I met them at their home on the Saturday before Memorial Day after they had dropped off a shuttle vehicle at the take-out early in the morning. We loaded all the kayaks in my truck and drove the short distance to the river. The new launch ramp and dock installed by the Missouri Department of Conservation in the park by the ferry was very convenient. We unloaded the kayaks, I parked the truck, and we started downstream just below Lock and Dam 20. There wasn't much current, but we were feeling fresh, and paddled right along.

Rhonda and I saw a pair of deer on the Missouri shore, resplendent in their reddish summer coats. There were numerous Great Blue Herons along the way. We saw one pick up a fish on the surface of the water, then drop it again. Perhaps it was too dead already. I heard many orioles, but saw none this time. Joe spotted an American White Pelican some distance south of us. The high point for wildlife was a pair of mature Bald Eagles roosting on a log that had washed up on a shallow sand bar. We passed by about 30-40 feet away. One hopped from the trunk down to the root wad, but they didn't fly.

It seemed to take forever to get to La Grange, though it was only two hours. A headwind was slowing us a bit. By the time we got there, I was pretty famished, having had only a light breakfast. We pulled our kayaks up on the beach and walked over to the Riverhouse Bar and Grill. Note: this eatery is not that visible from the river. It sits close to the railroad tracks, maybe 100 yards upstream from the launch ramp. We had their fantastic burgers for lunch. There was a mistake made on my sandwich, so they gave me another one free. It's been a long time since I ate two burgers in one meal (as well as fries), but I felt up to the challenge and consumed it all without difficulty. Rather than lapsing into food comas, we all felt invigorated when we resumed our paddle. We stayed on the west side of the channel (marked by green and red buoys) for most of the way.

Not long after we left La Grange, we could see the head of Hogback Island. This long, sandy-beach lined hotspot is well known to local boaters, who flock there in the summer for camping, swimming, and, uh, other activities. Managed by the U.S. Army Corps of Engineers, it is rare public land, as most river islands and shorelines are privately owned.

We seemed to gain velocity with the current being a bit stronger and the wind subsiding on this stretch. We also cut the corner on the bend, heading east toward Hogback Island. We had to get out of the way of a barge tow that was coming upstream. This maneuver offered us some better views of the folks that were diverting themselves on shore. There were plenty of bikinis, but I guess it was too early in the Memorial Day weekend for drunken nakedness. We had to angle around a sandbar on the south end of the island, though it was never a threat of any kind. 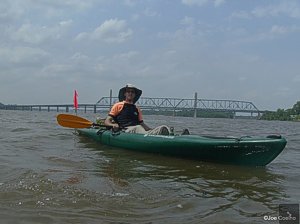 Shortly after passing Hogback, we could see the railroad bridge that spans the river at Quincy, supported in the middle by Quinsippi Island. At that point, we felt like the trip was almost done, though we probably had an hour of paddling left. There were a lot of powerboats coming out of Quincy Bay on their way to Hogback Island. Joe had a red kayak and Rhonda a yellow one, while mine was green. I put a bright orange flag on the back of mine so that I wouldn't get run over. It looks dorky, but I prefer that to dying in a horrible boating accident.

Around this area an obviously government-owned boat pulled up to us. It said "Ranger" on the side, not for the boat manufacturer, but for the officer. The driver said, "You guys are awful trusting." I agreed, then took off my hat. The Army Corps ranger recognized me; he was my former student Brent. He smiled, said, "Hey," and headed up toward Hogback.

About halfway to the railroad bridge, we saw a trihull pleasure boat run aground on a gravel bar. It was high and dry. Someone had made a grievous error there.

I was fairly excited when we passed under the railroad bridge, and more so when we went under the Bayview and Memorial Bridges. We took out at a private dock where Joe works. Most people would want to take out at one of the waterfront city parks that Quincy maintains on the eastern shore. That would cut about a half hour off the trip. I thought this paddle would push my physical limits, but I still felt good when we were done.

In summary, the float took about 4.5 hours total, not counting lunch, but the river was rather low. I'm sure it would be faster if the river was at a higher stage, with more current. It took much less time and effort than I expected, especially the La Grange to Quincy reach. Timing the float for lunch at the Riverhouse is a big bonus. I won't hesitate to do this float again.

Nice launch ramps and parking lots on both ends

In northeast Missouri, take highway 61 to the Rt. 16 exit at Canton. Go East down White Street. Make a left on 4th and a right on Henderson St. Make a right after the railroad tracks to the put-in at the launch ramp.

For the take-out, go east on 24 into Quincy, IL. Make a left on 4th, then another left on Spring, right on Broadway down to the river. Choose any park along Front street.