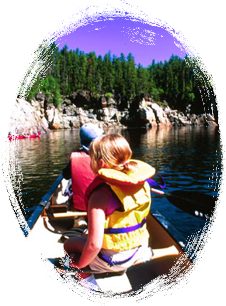 A Family River Trip in Canada

To take children on a canoe trip is a challenge. To take them down a remote Canadian river to the Arctic waters of James Bay, a trip that is difficult for most adults may seem ridiculous. But given the proper conditions and leadership, river canoeing with children can be a safe, enjoyable and fulfilling outdoor family adventure.

A trip on Northern Ontario's Missinaibi River is an expedition considered to rival the greatest canoe trips in North America. The river flows north for some 300 miles, beginning at the divide between the Atlantic and Arctic Watersheds and runs through Canadian Shield wilderness and the boreal forest, to empty into the sub-arctic waters of James Bay. If one were to paddle the entire river, the journey would likely take experienced adult canoeists three weeks. Few parents would subject their children, or themselves, to three weeks of living outdoors in the Canadian wilds.

Fortunately, by accessing the best part of the river by Bush Plane, and taking advantage of the low water season of late summer, it is possible to experience the magic of this incredible river with children on a six day trip.

A 40-mile mid-section of the river allows for a family paddle trip that culminates with the canyons of Thunderhouse Falls, where the entire river is forced through a narrow rock gorge before it crashes off the Canadian Shield on to the Hudson Bay Lowlands. This past summer we were part of a family canoe trip to Thunderhouse Falls, a destination we reached on the third day of our journey. Here we would take a rest day to allow the children to explore, climb and swim. But first, to get there, we had to deal with the Missinaibi River.

Our trip departed from the French-Canadian village of Mattice, Ontario, where we had met the other family on the trip with us. Our children quickly became friends and where soon playing, while the adults were in the motel rooms, packing the last minute gear into waterproof packs. I had guided this section of the river many times before, and was able to assist the others with packing the proper amount of clothes for the children, considering we would have to portage (i.e. hike) around the waterfalls. Since we would be traveling in late August, we anticipated warm, sunny weather without mosquitoes. Still, we were prepared for whatever the Canadian North would throw our way. 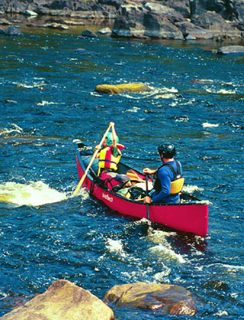 Our first day on the river began under a cloudless sky as we paddled a few miles to Rock Island Rapids. This first section of whitewater would be our training area for the remainder of the day. We set up camp, swam with the children and ate lunch of sausage, cheese, fresh bread and goodies for the kids, before beginning our training session below the rapids. After learning how to control the canoe using eddies and currents, brace in the waves and maneuver the boat using draw and cross draw strokes, we felt confident enough to run the rapid from the top. Each canoe made the Class II rapid look easy, and the children begged us to let them run it again.

That evening, while the children roasted marshmallows on the campfire, we looked out at the rapid from our tent site above the river and reflected upon how the children seemed at home here on the river, and we knew that the coming days would be as special for us as it would be for them.

The next couple of days on the Missinaibi River put us in rhythm with the river. Mornings began with the warming light on the tent and the rustle of little feet in the sleeping bags. Groggy children snuggled near the morning campfire, sipping hot chocolate as the smell of blueberry pancakes drifted in the morning mist of the river.

The canoes were loaded with a child in the bow of each, and the younger children riding in the middle. But as the days went on, we switched around, so that everyone had a chance to help paddle in our downstream journey. The rapids we encountered were first scouted from shore, or we confidently ran the easier ones in "ducky style", that is, have a line of canoes following the mother duck through the maze of rocks. In August, the rapids of the Missinaibi are shallow, rock-choked boulder gardens, which make them far less dangerous than the raging torrents of spring and early summer. In other words, the ideal conditions for a family trip.

We took a brief rest from the afternoon paddle and climbed the riverbank. A trail led to a couple of rustic cabins overlooking the river. The log structures belong to an Ojibway-Cree trapper and Native Elder, Fred Neegan, who had been expecting our visit. Fred has lived the seventy-two years of his life next to the Missinaibi River, and has paddled its waters more than any other living human. He still guides canoeists down river, and our time spent with Fred allowed us to see river life from a different perspective. As we sat in the musty darkness of his log hut, the children were amazed that there are still living pioneers such as Fred: history, living and breathing before their eyes-- and offering them tea.

Our river day ended with pizza being baked on the open campfire, children running along the rock shore or throwing sticks into the current. One evening, at our campsite overlooking Kettle Falls, we were treated to a spectacular display of Northern Lights; the pale hues of green, purple, red and white streak and dance above our tents in a light show that made us gasp out loud in amazement. 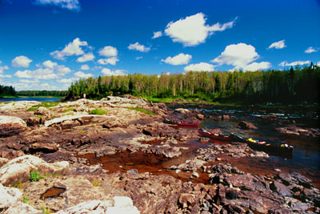 The approach to Thunderhouse Falls on the fourth day of our journey came with cautious anticipation. We knew the recent history of this place--it has a tragic reputation for claiming canoeists' lives. In my role as guide, I signaled the group off the river well above the rapids leading up to the falls. A long trail bypasses the falls and canyon, and we carried our gear along the well-used path to a side trail, cutting back towards the river. The trail opened at a clearing beneath the jackpine forest, and revealed the breathtaking cliff-top view of Thunderhouse Falls and the canyon below. This piece of heaven became our layover campsite for the next few days.

A rest day at Thunderhouse Falls gave the group a chance to explore the falls and lower canyon. In the centre of the gorge below the falls is a massive rock pillar, jutting upward like a finger to the sky. Conjuring House Rock, as it has been known since the days before European fur traders set eyes on this place, still holds for us the awe and mystery of a special, mystical spot. One cannot help but feel the power and spirit of the Rock as we paddled our canoes through the canyon, past Conjuring House to the base of Thunderhouse Falls. The Pre-Cambrian granite walls rumbled with the roar of the falls. We left the canoes and carefully climbed along the edge of the river next to the triple drop of the falls. Thankfully, the rocks are not steep here, and there is little danger of a child slipping. Still, experiencing the intense power of the falls so closely, one cannot help but imagine the fate of one so unfortunate as to have been thrown into this cauldron.

The Missinaibi River begins its drop off the Canadian Shield at Thunderhouse Falls. In the next ten miles, the river plunges nearly 300 feet until it finally reaches the Hudson Bay Lowlands. This portion of the river is spectacular. The ancient granite of the shield is replaced by sedimentary limestone; the dramatic rock walls eventually flatten to clay and gravel. And it is through this transition we traveled on our final day: after Thunderhouse we ran one mile of river to Stone Falls, then 1,000 yards of rapids to Hell's Gate Falls, followed by a long portage, ending with a 150 foot climb down into the canyon, then 5 miles of rapids below towering wooded hills. Then the river stills. We made it! 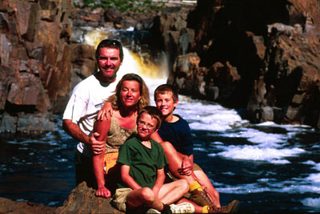 The children worked like troopers helping carry packs, paddles, water bottles and whitewater helmets across the mile and a half trail by passing Hell's Gate Canyon. We adults worked too, and somehow we all managed to pitch in until the 3 canoes and 9 packs got over the "Long Portage". Sitting at our camp later that night, our muscles tired and sore from the day, we were all very much aware of the physical price paid to reach this point on the river. Our children, asleep in the tents, were proof as well.

Here on the Lowlands, the river had slowed, and for the first time all week, we did not hear the roar of rapids or falling water next to our tents. The night was strangely silent.

In the morning our trip was to end with the arrival of a bush plane. We heard the far-off drone of the Beaver Aircraft as it circled above us, disappeared down river, only to re-appear skimming the surface as it rounded the bend in the river. Our pilot, Michel, coordinated the loading of our gear, and the children boarded the plane for the 30 minute flight back to Mattice. The canoes were strapped on to the floats of the plane on a later trip.

As the Beaver's floats lifted from the water we climbed steeply and followed the course of the river. The plane stayed in the canyon for as long as it could, and gave us a spectacular aerial view of Hell's Gate Canyon. It became very clear to us why we lugged all our gear and canoes for 90 minutes across the portage trail: the waterfalls that we flew over are larger and more violent than Thunderhouse. The river, constricted between the sheer rock walls, plunges over a fifty-foot ledge into a canyon of mist.

Our eventual touchdown on a small lake near our starting point of Mattice marked the end of our weeklong adventure. Our children have lived outdoors, ate campfire food, slept in a tent, woke to the songs of birds, helped propel themselves over forty miles of northern wilderness and experienced places of breathtaking beauty, seldom seen by most adults.

As the family van sped us on our homeward journey south, we were amazed at the ease of modern travel, of how seemingly simple our lives are, compared to the lifestyle of the river or to Fred Neegan, or to all those who, in the past thousand years, used the Missinaibi as the highway to the Northern Sea.

Our children are now part of this same tradition.

David Morin is a veteran river guide, whitewater instructor, photographer and father of two young paddlers. He is the director of Missinaibi Headwaters Outfitters, www.missinaibi.com