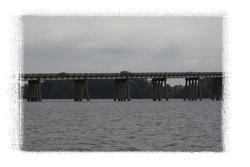 The weather was overcast as I began this trip from the Twig Ferry boat landing. Accustomed to the brawny rivers of Hampton Roads, my first impression of the upcoming tour area was cute: the wooded southern shore and its few stately homes would be connected by a short, 10 minute open water crossing to the slightly more developed northern shore. The bridge with its interesting walking legs would provide a dash of spice.

It was a few hours before low tide with a light wind out of the N to NW. The high temperature was predicted to be in the lower 70s so it was a bit cool starting out. Heading east from the landing, the visibility was 2 which allowed me to spot blue crabs on the bottom in mating clutch. Incongruously, vessels large enough to circumnavigate the planet were berthed behind some of the mansions on this little river. I curved north toward Wilton Creek where aerial photos had revealed lots of piers but also wooded banks.

Inside Wilton creek there were a few secluded wooded nooks, schools of baitfish Ill call menhaden out of ignorance, and plenty of birds: osprey, great blue herons, and kingfishers. There were several pocket marinas and even a condo mixed in with the single family homes, but nature seemed to be surviving the suburbanization if not the nutrient injection into the Bay from all the septic fields. A large sailboat bravely sailed down the creek.

The banks consist of a red clay topping a weakly consolidated shell hash (a poor-mans coquina) below which is a layer of Miocene fossil shells of relatively small size. Frankly, I was much more impressed by the many oaks which were loaded with an enormous crop of large acorns. I saw no squirrels so perhaps they had all burst.

As I followed the creek farther north it narrowed, became wilder, and the persimmon fruit blushed from yellow to faintest orange. The outgoing tide was no longer easy to ignore, the narrow channel became hard to find, and scooping muck with my new fiberglass paddle was getting old fast. I stopped near the first minor deadfall, examined some deer bones on the bank, and turned around. With the wind at my back, I made rapid progress out of the creek. Continuing north and east for a bit, the next few miles looked like an unappealing mixture of noreaster-blasted lowlands and higher properties with rip-rapped shorelines, so I crossed over to the partially wooded southern shore. 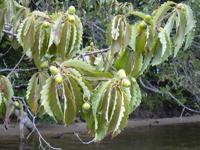 Nearing the spur below Ginney Point, a pair of bald eagles silently took wing. Making my way south and west, a few coquina banks draped with fox grapes and more acorns gave way to attractive homes with long piers (some with little humps for small boat traffic like me). The waves werent too bad despite the shallow water and the lack of wind shadow, but they had whipped up masses of sea-foam on the shores.

High eroding clay banks make the southern shore more shallow and presumably less attractive to development. Below the topsoil was a 4 layer of clean gray clay which looked like it could supply every kindergarten class in the state. Below that was another layer containing modern-looking but worn oyster shells, and at the bottom was a reddish, sandy clay containing bits of shells and plants. One wave-washed piece of the reddish clay contained what appears to be a fossil fish (or a cross-dressing pine cone with eye, mouth, and fins). Unfortunately, like a pet fish, Ill have to keep this fossil fish wet so it doesnt deteriorate. 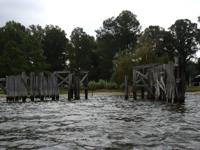 Further west I found one end of a sturdy old ferry landing built to withstand frequent bumps from heavy ferries in winds like now. The wind had picked up to 15 mph and an isolated rain squall was approaching. There was blue sky in front of me, so I figured I would ride it out. The words Piankatank duck pond may have crossed my mind at some point and cast a jinx. After struggling slowly upwind until finally passing under the bridge, I found myself in a field of breaking 2 waves. If you believe in physics rather than jinxes, then it was due to the much longer fetch, a shallow bottom extending far from shore, and some large shore deadfall which was reflecting the waves back into the wind. I had briefly forgotten that we only paddle when were allowed to by conditions, not when we want to, and was being reminded by greater powers.

Chastened, I headed for shore next to some cliffs to hang out a while. The first thing I noted was that the high water marks on the small sandy beaches werent very high; the tides on this part of the Piankatank River are only about half what you might see on the James or York Rivers. The second thing I noticed was sinking up to my knees in quicksand. Evidently, after a good rain, springs leak out of the cliffs and, where the water pressure is just able to lift the sand without washing it away.... the impermeable clay shelf I ended up standing on probably helped produced the spring. Once the squall passed and the wind had died down, I continued along the wooded shoreline to the north and west until I reached a point with even more impressive clay banks which were my cue to cross back over to the northern shore.

In this section I made a clockwise loop with Berkley Island in the center. The crumbling low cliffs of the main shore looked more interesting than the island; running short of time means you have to make hard choices which spoils some of the fun. Further along, near a little marshy pocket there were plentiful schools of menhaden again but I couldnt catch one in my net. Along the sandy shore-line, I saw a large red velvet ant (a wingless, female solitary wasp and not a good climber at all), and noted strange slabs of rock at the base of a cliff: a former patio, now tumbled down the cliff to become an ugly breakwater.

On the way back, I spooked an osprey eating a fish on a dock. She sweetly told me off and flew off with her now headless fish in tow. On previous trips Id noted how ospreys go to the toilet at home: facing the center of the nest, they lean forward and shoot feces 15 backward. At the time I was impressed, but I would have been much more impressed if Id known they were passing bits of fish skull. I didnt see a turtle the whole day. Its probably too salty for any permanent chelonian residents except terrapins, but this area lacks the high laying beaches and has relatively little salt marsh edge for them to prowl. Only once all day did I startle a large fish.

This is a paddle of significant local interest. Bird watching is good. The geology is mildly interesting. This trip was 12 miles in about 5.5 hours. Locals might try exploring the upper reaches of Wilton Creek on the (admittedly modest) rising tide. If theres enough upper creek to make it worthwhile, clearing deadfall might be a nice project for a local scout troop.

See http://www.blueways.org for information. The trip was largely inspired by the Piankatank River section of the Mathews County Blueways Trail. The relatively developed Mathews County shoreline isnt exactly the wilds of the Amazon (though there was that quicksand), but they make paddlers feel welcome.

No fees, but also no services at the Twigg Ferry landing.

From Matthews County, VA, take Rt. 3 north across the bridge to Middlesex County. Turn right to find the Twigg Ferry Landing at the base of the bridge.

See http://www.blueways.org for maps which can either be downloaded or (in gorgeous waterproof form) purchased.

My fantasy is to find a cheap Russian satellite photo service with 1 foot resolution offering images from different seasons and times of day. Until then, I'm settling for the somewhat outdated but CONSISTENTLY high resolution USGS aerial photos and (even more outdated) topo maps at http://www.terraserver.microsoft.com/. Sometimes the photos edges don't line up, sometimes they're underexposed, and they are taken at a grab bag of seasons and sun angles, but they are usually adequate and the price (free!) is right.