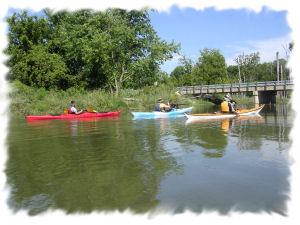 Lake Vermilion is located in Danville, Illinois and is a splendid recreational day paddle--although if inclement weather (e.g. extreme wind), due to the generous size of the lake, a sea kayak and experienced paddler is suggested.

The brown, but reasonably clean 1000-acre lake is prominent on any map of Danville, being the largest body of water in east central Illinois. It is tadpole shaped, with the dam on the south end near the head. It is man-made, and although has occasional stumps, is generally clear padding. Its part of Lake Vermilion County Park and is a watershed for the city of Danville, providing drinking water. It is surrounded by a few opulent, and many humble, homes, some with lakeside docks but the steep incline at lakeside makes it tough for some homeowners to access the lake.

The put-in is at the public boat ramp, located on the west side, central lake, near the Danville Country Club on your map. It is the same put-in used by powerboats and as of this writing there is a $10 fee for each boat launched at the ramp, and incredibly they will charge this fee even to paddle craft. But, the ranger gave my paddling group a tip and stated that, once entering the boat ramp parking lot, if we turn left and drive north (not on the public road, but within the launch area there is a small paved road) there exists a picnic area and a set of stairs descending to the lake and a healthy dock (intended for temporary docking of motorboats); we were advised that we could launch there for free. This dock is literally about 1000 feet from the actual boat ramp, so not inconvenient, and does avoid the hub-bub of tangling with motorboats on the hectic main ramp. The issue is the portage, which involves descending about 25 wooden stairs before putting in off a dock that is at least two feet off the water. Not for the faint of heart, but manageable with care, is the portage and dockside put-in. The parking for the vehicles in this area is very secure.

Once launched, the lake can be paddled south toward the Denmark Road Bridge, and there is a passage under the bridge for all boats that is on the far (east) side. The basin south of the bridge, although having a view of the dam (well blocked off, not much danger of going over unless one did not heed the signs) and many hillside mansions, is only about 200 acres large in a big circle open area.

The more interesting paddle is coming out of the put-in (dock), and paddling north, past the Danville Boat Club and continuing northward as the lake narrows and becomes the feeder stream/river. This area rapidly becomes wild with few homes, and can have some uncommon stumps. It passes through a mostly dry marshland area featuring a tall lookout timber tower (hard to climb from the boat as the water does not go to the tower), and passes under several bridges, the largest of which is busy Route 136/Vermillion Street, one of the main thoroughfares through Danville. With water at summer levels, my paddling group (see photo) was able to travel approximately 6 miles north of the dock/boat ramp put-in, passing under bridges and defining central Illinois scenery. The river eventually became shallow and sandy, and we decided to turn back.

Possibly in springtime and after thunderstorms, the river could be navigated further north. It is not a fast flowing river and thus ideal for a shuttle-less run. In theory, if water levels were high, one could paddle to 2750 North Road, which is near Bismarck, IL, a good goal if Mother Nature permits. I do not know if logjams become an issue further upstream.

A pleasant shorter day paddle is, indeed, to remain in the largest basin, just north of the Denmark Road bridge, which is paddling south of your put-in. This keeps one in proximity of the boat ramp, houses along the lake, the pretty and long Denmark Rd Bridge, and includes a stumpy area on the east lake with waterfowl and ideal fishing. Please note caution around motorboats, which frequent this area.

A website dedicated to the conservation area and the boat launch can be found at www.vccd.org The site mentions a boat decal and the $10 daily fee, yet I have paddled this lake over a half dozen times and was never forced to buy a decal and, in fact, the park employees have been helpful with finding the access as detailed above.

Danville features old-time baseball from club league Danville Dans at Danville Stadium in the summertime, and has some of the tastiest ice custard at the Custard Cup on Vermillion Street near shopping (mall featuring Elder-Beerman store). Danville is the boyhood home of funnymen Dick and Jerry Van Dyke, and acclaimed actor Gene Hackman. It has undergone a loss of jobs in recent years, but many of the grand homes along the waterfront can be viewed by driving around the lake and harkens to a prosperous past. Enjoy Danville during your trip.

Hotels abound in Danville, but there are no major campgrounds.

Interstate 74 to Danville, IL, and take the Gilbert Street exit travelling north through town, and the lake will eventually appear.