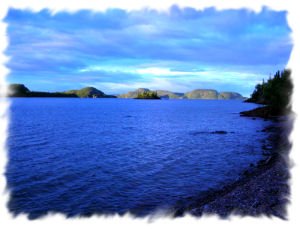 Last fall the Canadian government officially established the Lake Superior National Marine Conservation Area. See this website for a map and description of the area:
www.pc.gc.ca/progs/amnc-nmca/proposals/carte-map_pro_e.asp

We began planning a trip to paddle in this area last fall, and 12 of us met to start paddling our kayaks in Rossport, Ontario. Most of the group planned on just paddling the Rossport islands and St Ignace Island. Two of us planned to try paddling from Rossport southwest to Little Trout Bay, which is just a few miles from Grand Portage, Minnesota.

The spring and early summer up there were very cool and stormy this year and the water temperature was only 40F. The weather was perfect the first day of our trip. We paddled from Rossport out to Battle Island, and landed in the cove on the north side of the island so we could go up to see the lighthouse. After spending a few hours on Battle Island 10 of us made the crossing to St Ignace Island. The other two decided they wanted to avoid the strenuous crossing due to one of them having a sore wrist.

We found a well protected cove on St Ignace to set up camp for the night. The next morning the lake was calm, but it was quite foggy. I was the only one in the group who had paddled this area before, so I led the group along the south coast of the island to the CPR slip on the southwest part of the island. The Canadian Pacific Railroad made this protected cove when they removed gravel from there to build the railroad. In that cove is a nice sauna, which we took time to enjoy.

Around noon the fog began to lift and the wind began to pick up from the southwest. We loaded up and proceeded to head out and around Newash Point. The point is very exposed with shoals, so we wanted to get around it before the weather got too rough. It was choppy going around the point but everyone handled it well.

From the point we proceeded into the Blind Channel which was protected from the waves of the open lake. A few miles down the channel we stopped on a sand point for a break and prepared to split and go different routes. Eight of them were going to proceed up the channel into Nipigon Bay and back to Rossport. Scott and I planned to cross the channel and start heading toward Little Trout Bay over 90 miles away. The eight heading toward the Nipigon Bay had the wind at their backs, but Scott and I paddled into a headwind the rest of the day. We paddled 10 miles after leaving the others and stopped for the night on a gravel spit on Spar Island off the coast of the Black Bay peninsula.

In the morning there was a strong northwest wind, but we tried paddling for three hours and only made about five miles. The conditions were getting rougher so we found a protected place to land and wait for the weather to improve, the weather report at noon said the wind was 57K in Thunder Bay. The conditions had improved by 5PM so we launched to paddle after our seven hour period of waiting and resting. The weather got better as we paddled, so we paddled till midnight. 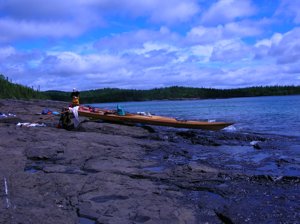 We stopped for the night to camp on Porphry Island off the west edge of the Black Bay peninsula. I had camped there five years ago and found a good place to camp even at midnight. By 7AM we were on the water again and making the crossing to the Sibley peninsula (Sleeping Giant park). The wind was out of the southeast and the waves were building as we paddled to Tee Harbor, where we took a short break.

Next we had to cross Thunder Bay to Pie Island. The shorter way was to paddle across the south side of Pie Island which has steep rock cliffs for over 5 miles after the 7 mile crossing. We knew that would be suicide due to the building southeast winds with waves at four feet and increasing, so we headed across the bay to the leeward side of Pie Island. The quartering tailwind allowed us to make great time during the crossing, but it was tiring paddling in those conditions. We took a long break on a beach area of the northwest part of Pie Island where it was protected and warm in the afternoon sun. Where we stopped there was an old lighthouse that hasn't been used for many years.

After our break we loaded up and began paddling toward Dawson Bay on Pie Island, and from there we planned to cross to Thompson Island. On Thompson Island there is a nice sauna and we wanted to use it and spend the night there. As we paddled around Pie Island we watched a dark gray fog roll in from the lake and swallow up Thompson Island. We quickly changed our plans and headed west toward Flathead Island and the mainland to avoid the fog and building seas. The weather got rougher as we paddled for the next two hours, and we landed for the night on Sister Island. Sister Island is a thin island about a mile long which is about two miles off the mainland. We landed on the lee side of this island on a small rocky beach. Thank God we had Hennessy hammocks to hang between trees on the rugged little island.

In the morning we had a heavy fog with a misty rain. The weather report was not good - on the open lake the waves were going to build to 9 feet by the afternoon with thunder storms developing. We had 10 miles yet to paddle to our take out at Little Trout Bay. The outer island chain would protect us some from the worst of the weather, so we paddled west from Sister Island to the mainland and followed the shoreline to our take out. The fog was quite thick that morning and we were never able to see more than a mile during our final stretch. We celebrated when we saw the conservation area boat ramp and parking area materialize out of the fog at Little Trout Bay, because we'd made it and our friend Jim was waiting there. Jim was one of the eight others who paddled back to Rossport, and then drove the van to Little Trout Bay to take us home. He informed us that all the others had a safe trip back to Rossport.

This area is wild, wonderful, rugged, and remote. There are not any developed and maintained camping areas. It is not a park area with rangers and people around to help you. However, if you like the wilderness challenges, have the necessary skills, and are prepared it is a great wilderness trip to make. Scott and I are paddlers that enjoy the challenges of the wilderness and don't mind paddling long distances (we paddled 123 miles according to the gps). Most people would prefer to take many more days for this trip and spend more time to "stop and smell the roses".

Let me restate: The area of Lake Superior we paddled is probably the most remote and wild area of all the Great Lakes. Therefore, those who paddle it must be prepared for the challenges of this wilderness area.

We didn't use one, but there is an outfitter in Rossport, Ontario.

This area is on the north shore of Lake Superior and there is only one road that goes between Thunder Bay and Sault Ste. Marie - Route 17.