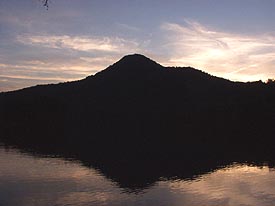 On a map, Lake Santeetlah looks a bit like flattened fried calamari, but in person it's all hilly curves and broad expanses. The shape, like several others in Western North Carolina, comes from a hydroelectric dam that flooded numerous spindly Appalachian valleys, and now provides some cool kayakers and too many powerboats with 3000 acres of water (76 miles of shoreline) to navigate. Read about it at the Graham County Chamber site or Travel site. Here is Heather and Noah's journal of a late summer trip.

We drove about 100 miles from Asheville, via Cherokee and a quick stop at Nantahala Outdoor Center (to rent paddles--whoops, we'd better triple-check our packing list next time!), to the Ranger Station boat launch a few miles north of Robbinsville. Three kayakers were just finishing a trip around the lake, and had good campsites to recommend us. They were also sweet enough to buy us a $3 map at the Ranger Station across the street, rather than give us their wet and tattered copy. There is also a map floating around the Web, but we have taken the two and updated them into this map.

Tip: smaller (10-quart) drybags are far easier to pack than overstuffed larger ones (20-quart, necessary only for sleeping bags). We had too many of the larger bags, but still crammed them all into our kayak portals. The extra weight of all our gear made both of our boats glide much more smoothly (track straighter) through the water by pushing the keel further underwater (as well as gave us a greater sense of confidence in these 15.5-17 foot monsters).

After putting in around 3 PM, we paddled an easy 2-3 miles to what we dubbed The Peninsula (campsite S9). We looked at several campsites in the area, to find the best for the next two nights. There are more than fifty primitive campsites scattered around the shoreline. There is no charge or reservation required for any of them. Each of the four we explored had a picnic table, bucket toilet, grill, flat area with wood chips, and, sadly, litter.

All the campsites in this area are just great, so we're just being particular here. Once we passed the peninsula and entered the cove near Funnel Top Mountain, we were outside the range of most motorboats and couldn't see any of the houses congregated in the few residential areas of the lake.

A few details about the lake. Most of the shoreline is owned by the US Forest Service, hence all the campsites and the absence of other human construction. Joyce Kilmer Memorial Forest, a virgin hardwood forest (see Saturday's write-up), almost borders the western edge of the lake. The swimming is divine, the water deep (a slightly unnerving 400 feet in some areas), and the rocks a bit sharp and layered with red clay.

We went for a nighttime paddle, after the sun sank early behind Funnel Top (areas of the lake more open to the west get quite a bit more evening sun in September), beneath a waxing gibbous moon. 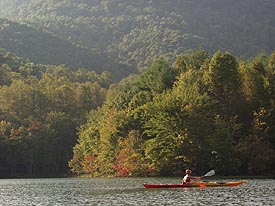 We slept late, woken by crows and the sun dispersing the morning fog. Rather than packing up all our gear, we chose a quieter day of playing with our boats and exploring West Buffalo Creek. Noah had picked several kayak books up from the library, so we used one of these to practice wet exits and the first baby steps of the roll. If we learn these tricks, and better paddling technique (roll your torso, don't pull with your arms), we can head out to the ocean one of these years.

Our boat seats dried quickly in the still-warm equinox sun, and after a rest we hopped back in to find a lunch place. We headed down the West Buffalo Creek to look for a lunch spot. However, we couldn't find any of the marked campsites in this area, and had to settle on a hilly bit of land a little too near the Rt 143 bridge (apparently a regional destination for motorcycles) to munch on our bagels. Deeper yet, we reached the edge of the national forest, marked by a spattering of houses, docks, and moored motorboats (unfortunately, we didn't see nearly as many human-powered boats as we had hoped), pushed through a murky area of scuzzy water, and reached the creek-proper. What cool rushing water! In the space of a wooden bridge or so, the water metamorphosised from luke-warm stillness to crisp whitewater. We filled up our water bottles and rode the current back downstream into the lake.

On our return trip, we discovered a Cool Rock and lots of Pretty Coves.

"This lake is the prettiest ever," sayeth Heather, as she awoke Saturday morning. We ate oatmeal (minus forgotten brown sugar) and hopped in our boats an hour and a half later (packing kayaks is hard work--especially when we don't yet have an established packing system).

We passed some ugly houses and a monster dam, all clustered around the private Santeetlah community. Fortunately, the many curves of this lake hide these developments from most of its waters.

Joyce Kilmer Memorial Forest was our goal for the day, but on the way we dipped into Farley Cove to check out the marked campsite. Deep in the southwest corner, we found the muddy shore and a short path leading to a small clearing. The campsite didn't seem quite as official as those in the cove near Funnel Top--a makeshift table, random gear stuck in hollows, and no facilities--but could have been okay if not for the abundance of poison ivy.

After investigating Farley cove, we headed for the western Avey Branch of the lake. There are numerous campsites along its northern shores, popular for their easy road-accessibility (the road can't be seen and is very quiet). We stopped at J7 for lunch, a very pretty but sloped spot. It's on a tight convex curve of the lake, and so motorboats passed close enough that their wake crashed our boats against the shore--we were none too pleased. Later in the evening, we passed J7 again and waved at several families hanging hammocks and splashing in the water.

From lunch, we paddled along to the beginnings of Little Santeetlah Creek. The maps don't show where the lake ends and the whitewater begins, so we had hoped to navigate all the way along to the memorial forest. But no, shortly after the Avey Branch marina, a rushing, rocky, and very, very chilly stream greeted us. Being intrepid explorers, we tied up our kayaks to the far shore, waded through the creak's current, and scrambled up the hundred-foot bank to the Joyce Kilmer road.

Joyce Kilmer side trip: around 3 hours, at a slow walk
We plodded along the road for maybe two or three miles, passing a flush toilet (!) at the Horse Cove Campground, to the forest's entrance (where we admired a beguiling blue Prius). The forest is a joy. It's one of the few virgin Appalachian hardwood forests (most have long since been turned into packing crates), and it has a gentle, luminous quality. A two mile path leads past a memorial to the poet, and curves around occasional MASSIVE trees. Many of the trees in this forest tower over our normal conceptions, but these were the biggest trees Heather had ever seen in her 24 years of avid tree observation. At 22 feet around (measured in heatherlengths), that's big and beautiful. Christopher, of WPVM fame, gave us a much-appreciated ride back to our boats in his biodiesel worthy old Mercedes.

On the way back into the lake, Heather spotted, of all things, a jellyfish. Noah didn't quite believe her, but then we both spotted another, and another, and, for the space of several minutes of kayaking, there were hundreds. These filmy little blue creatures looked sort of like jacks surrounded by a three-dimensional membrane that continually expanded and contracted. Heather took careful note, believing herself to have discovered a new species of freshwater jellyfish! Back at home, however, Noah researched freshwater jellyfish, and learned that similar quarter-sized jellyfish infest Lake Lure, a similar sized lake also in Western North Carolina, for two weeks every year. So much for that discovery. (By the way, they don't sting.)

We spent the night on the unnumbered easternmost campsite of those along Joyce Kilmer Road, marked by two large rocks rising up from the lake. One of these provides flat space for cooking or sitting in the stillness of the evening; the other, in the shape of a kayak hull, gently descends into the water. The campsite isn't quite flat, and we couldn't bring ourselves to use the flat graveyard just up the trail. One other minor nick is that just around the bend are two or three (mostly hidden) houses with moored boats. Overall, this was an incredibly beautiful campsite, perfect for swimming, moon-watching, and photography. 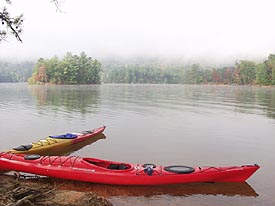 At 8 AM, the fog and clouds were thick about campsite, obscuring the nearby mountains. By 10:30, the sun had burned away the moisture, as we paddled quickly southeast. We crossed large stretches of open water, slipping quietly past Santeetlah village. By the time we arrived at the peninsula, the sky was once again bright blue.

Our paddles were due back at NOC by 5, but that gave us time for a little more exploration. We took a quick break at S10, a pretty but Spartan campsite with few flat areas and sharp, striated rocks at the landing.

Rejuvenated by paddle mix (the kayaker's version of trail mix), we headed south into Buffalo Creek. There are several campsites marked on the map, but the first we actually saw was L5. Not much to recommend here, as the entire area felt too still, almost stagnant. At least it seemed off the beaten track, and we did get to spy on some furry creature running around the hills, scaring the crows.

We arrived back at the Ranger Station boat launch in the middle afternoon, unloaded our boats, fussed around in the water, and drove off happy about the lake and excited to look at our photographs.

Maps are available from the nearby Ranger station.