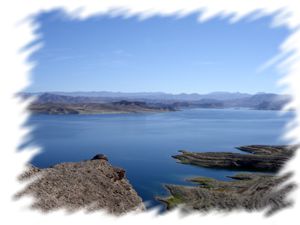 Encompassing 1.5 million acres, Lake Mead National Recreation Area features two large reservoirs, Lake Mead and Lake Mohave, which are fed from the Colorado River and created as a result of the Hoover Dam. Lake Mead, the larger of the two lakes, spans across Nevada to the west and Arizona to the east, covers approximately 247 square miles, and boasts 550 miles of shoreline. Attracting nearly eight million visitors annually, Lake Mead is a popular spot for boating, waterskiing, swimming, and fishing. Its surrounding desert is home to rock formations and diverse flora and fauna, which reward hikers and photographers. Originally called Boulder Dam Recreation Area, the parks name honors Dr. Elwood Mead, the U.S. Reclamation Commissioner between 1924 and 1936. Located approximately 30 miles southeast of Las Vegas, the recreation area boasts eight marinas, which offer boat and house boat rentals and is also home to eight campgrounds and five RV campgrounds with hookups.

My paddling partner, Tom K and I arrived at the Temple Bar marina, just before sunset and just in time to check in to our room and to have dinner at the marina cafe before they closed at 6 pm. After dinner, we walked around the marina grounds and saw a coyote wandering around. As the sun went down behind the mountains, we made our way into the small pub on the marina property. After a couple of beers and some chatting with a few locals, we played some rock & roll and country music on the jukebox and when the pub closed at 8 pm, we retired to our room for a good night sleep.

At 8 am on Saturday, we met our guides, Robert and Paula of Kayak Lake Mead for breakfast at the marina cafe. After a good breakfast and discussion of our paddling plan, we soon had our kayaks loaded and were on the water shortly after 9 am. We launched into the Temple Basin of the large lake and took a northwesterly paddling course along the shores to explore. At the launch site, the beauty of the large temple formation and the entire canyon surrounds you and you immediately know that you are in one of Mother Nature's wonderful and special places. 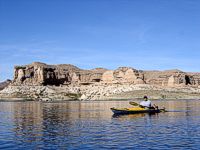 At the time we launched, the air temperature was already in the 70s with just a very mild breeze. The sun was shining bright, casting a beautiful hue on the spectacular mountains surrounding the lake. We took a leisurely pace, absorbing all the natural beauty of the mountains and the peacefulness of the relatively still lake, which was virtually devoid of any powerboat traffic. Within the first mile, we observed a few great blue herons on the side of the mountain while watching some rather large striped bass swimming in the crystal clear waters below our kayaks. Continuing our relaxed paddling pace, we made our way through the canyon of the lake and after about 4 miles of paddling, we stopped off at a small sandy beach to do some more exploring on foot.

After a brief stretch, we put on some footwear for hiking and began our gradual ascent up the mountain. Although we stuck to a small gradually elevated trail, the intensity of the hike and heat of the hot fall sun elevated my heart rate and caused some sweating within the first leg of our ascent. As our elevation grew higher, the views became more spectacular. When we reached some flat ground, I took a few minutes to catch my breath, and then we combed the area, observing interesting rock formations, flora and fauna. The air smelled crisp and clean with a hint of aromatic herbs from some small bushes growing on the mountain. Robert pointed out a few bushes of Mormon Tea and a few small cacti. We also saw a few areas on the ground where it looked like burro had nestled. After combing the area, we decided to hike to a higher peak which seemed to overlook even more of the canyon below. At the apex of the peak, we were treated to a breathtaking panoramic view of the Temple Bar Basin below. While the rest of the group was checking out some interesting rocks, I took some pictures and then just sat on a rock at the top of the peak and enjoyed the beauty of it all for a while. It was like looking down on paradise. It was very peaceful, very Zen-like. 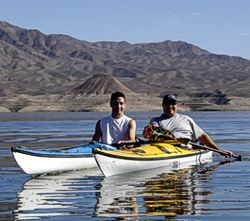 When I finished absorbing the beauty at the top of the mountain, we started our descent down the trail and back down to our kayaks. After reaching the bottom, we laid out a blanket and ate lunch at the shoreline of the lake. We refueled ourselves with some food and drink, and then headed back out onto the water. We spent the next few miles exploring some more little coves and tributaries of the lake. In one small cove which was surrounded by tall mountains, we observed two burros grazing on the side of the mountain. They didn't seem too disturbed by our presence, however when we approached them a little closer to take some pictures, they moved to where we could no longer see them.

It was starting to get late, so we soon departed the cove and started paddling back to the takeout. On the way back, the position of the afternoon sun had shifted, illuminating different parts of the canyon and providing a different set of picturesque backdrops for more photographs. Although we kept a more constant paddling pace on the return trip, I didn't want the trip to end. We arrived back at the Temple Bar Marina at about 5 pm and after paddling slightly more than 13 miles.

It was a perfect day of paddling. Robert Finlay and Paula of Kayak Lake Mead were awesome guides and paddling partners for the day and the natural beauty of this area was very captivating. It was another spectacular day in the Tao of Paddling.