This trip was an experiment to see how early the brown trout would bite in Kortes Reservoir, which has much better fishing in the heat of summer due to the cold (but also clear) water issuing from the bottom of Seminoe Dam immediately upstream.

The Launch, at the north end of a steep and rocky 4WD track, was tricky due to high rate releases from Seminoe Dam although usually the river is Class I along its western edge and Class II if you want to play with the standing waves in mid channel floating down during high flows. We were paddling tandem in a Grumman standard 17' aluminum canoe with an inexperienced bowman so we had to take extra care.

As the river made a hard right downstream we entered the tailwaters of Kortes Reservoir where the largest trout (10 lbs) often feed. We had our lines out but had no strikes. We continued padding the circumference of this mile-long reservoir trolling and casting spinners & hammered gold spoons without a strike. 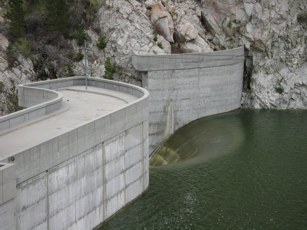 We also scouted out the one and only tent pad constructed decades ago on the west shore in this not-so-level area. We observed Kortes Dam from the back and noticed 5' of water going over the spillway - and that any ride over that would be instantly fatal.

Although it was Late May, there were occasional snow squalls and some accompanying light winds, maybe 10 mph. Around 2:00 PM while paddling back to the Launch, I latched onto a 27" brown trout and my partner caught a 19 incher a short time later. We would have caught many more in the summer, however.

The snow became continuous and due to the high flow conditions we had some strenuous paddling even while staying hard alongside the west bank. Had we both been inexperienced we would probably have taken a swim in that cold water coming in through the boulders near the Launch.

We had about 4 hours on the water, including two breaks on shore. This is a very scenic spot, with cliffs and a lot of timber, but the main draw is the fishing, as the cliffs discourage hike-ins. If you are driving along Interstate 80 with a canoe or kayak on your car, especially if you fish, this is a very worthwhile side trip.

There is one primitive tent pad in the large ponderosa pines on the west side of Kortes Reservoir. There are commercial campgrounds and motels in Rawlins and Casper, public campgrounds at Miracle Mile and Seminoe State Park, and a free BLM campground at the Dugway Launch south of Seminoe Reservoir on the Seminoe Road.

No fees or permits for the Launch itself.

Drive 33 miles SW to Alcova, WY on Highway 220. Turn left onto the Kortes Road and drive 36 miles south to the turn-off to Seminoe Dam.

Or, from Interstate 80, drive 37 miles north on the Seminoe Road to the Seminoe Dam turn-off.

Either way, turn east to Seminoe Dam, but after about 500 feet stay to the left, and after another 400 yards park above the river. There is a 4WD road that goes north (left) down to the river AWAY FROM THE DAM to the Launch.