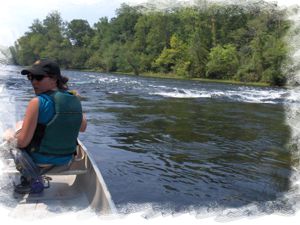 We parked one vehicle at our destination, the put-in under the HWY 411 bridge, outside of Benton TN. Drove to Reliance, TN, to park and put-in at Webb Bro's Grocery.

Got under way at roughly 1300 hours, the water had been released from the powerhouse at 1100. We took 2 17 foot canoes, a RamX Coleman and an aluminum Tracker (Osage Built). My brother had just done the run the evening before in the Tracker boat, putting in at roughly 1730 hrs. He noticed the water had been 1 to 2 foot higher then. As it was today it was a very exciting trip, taking almost 3 1/2 hours to get to the Hwy411 bridge, with only one short stop.

The lower water level in combination with both boats being keeled vessels made for some spookiness on the rocks. The evening before he said he had hit only one rock with the Tracker, I think I hit every rock in the river today with the same boat. It was thrilling at times, you can get hung up on the rocks, spun around and things get interesting quick when your going down sideways. Smooth bottom boats with a shallow draft would fair better I think. My bro had his young daughter and wife and I had my girlfriend with me, no boats were swamped and all hands were dry at the end.

The scenery is beautiful as the river runs into the high mountains, you eventually pass through them and the rocky cliffs of Gee Creek are a sight to see. Simply put, this leg of The Hiwasse is Canoe Territory, no powerboats of any kind would dare, also we saw few kayakers and you will pass many places to picnic. Islands abound and there are several public picnic access sites where there are likely to be swimmers in the water. The Hiwassee does not release year round or so I am told, so best to plan this for the summer.

Webb Bro's Grocery is an outfitter that offers shuttles and tube rentals for trips farther up the Hiwassee. Bathrooms, food, etc here.

We didn't pay to park at either location, no signs were posted suggesting this at either place. There were many signs suggesting life vest use here and there.

Hwy 411 out of Benton, TN, their is put in and free parking under the bridge. Leaving the put in you will head back towards Benton, taking a left on Hwy 30, to Reliance. Coming into Reliance you will see Webb Bro's Grocery on the left, there is a grass parking lot behind it.