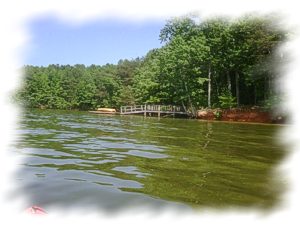 High Rock Lake is legendary in fishing circles as one of the best bass lakes in the southeast. High Rock is the northernmost of the Uwharrie Lakes and the second largest lake in North Carolina behind my "home" lake, Lake Norman. Despite living less than an hour from High Rock, I had never considered paddling it. Recently, though, I learned that the Carolina YakFish Tournament Series was sponsoring a kayak angling tournament on the lake in September. I am more of a kayaker than a fisherman, but this sounded like it could be fun, so I decided to head over and check High Rock out.

Upon arriving I had a sandwich at Tamarac Marina, but they were sponsoring some sort of an FLW event and their launch area was very busy, so I launched from across the road at the public ramp. There is no designated kayak launch area, but there is a stretch of sandy beach near the handicapped parking area and that's where I put in.

Heading west along the shore I paddled for about 30 minutes and came to a marshy area with several partially submerged bushes. The houses along the shore here range from shacks to trailers to decent-looking lake houses. I took the opportunity to make a couple of dozen casts into the bushy area. Didn't catch anything, but this was high noon and not exactly the best time to be wetting a line. 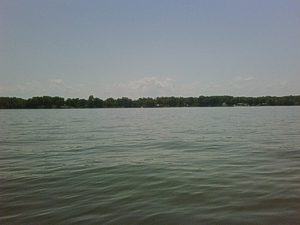 As I continued on along the shore, the quality of the houses seemed to get better. This side of the lake is heavily populated, so if you're looking for a wilderness paddling experience, this probably isn't going to work for you. The other side is far more natural, with only an occasional house or dock. Two hours out, the lake narrowed to a channel about 600 yards across and I headed over to the "natural" side. There are a few interesting nooks and crannies to explore and I went up and old creek for a couple of hundred yards before it became unnavigable.

Altogether, I spent about 4 and a half hours out on the water, an hour of that fishing.

As a place to paddle, High Rock Lake is typical of southern man-made lakes. Paddling purists will probably not find it very exciting, and it isn't as natural and doesn't have as many interesting features as, say, Mountain Island Lake. If you are into kayak angling, you may find it more interesting. I am planning to head back in a few weeks and scout out the area to the east of the boat ramp, in anticipation of the tournament in September.

You can put in at either the Tamarac Marina or the public boat ramp across the road. Note the parking restrictions at the boat ramp. Only vehicles with trailers are allowed to park in the lower (paved) area. There is another unpaved area just up the hill for other vehicles. Tamarac Marina has a small restaurant and a pretty good bait & tackle shop.

The lake is in a fairly rural area near the town of Salisbury. The best way to access the lake is the Tamarac Marina or the adjacent public boat ramp. To get there take I-85 to exit 76 then head east on Innes Street about a half mile to Newsome Road. Turn left on Newsome and follow it until it ends at Bringle Ferry Road. Turn right on Bringle Ferry and drive for 7 or 8 miles, or as they say here, "a fur piece." The Tamarac Marina is on the left. The pubic boat launch is on the right.