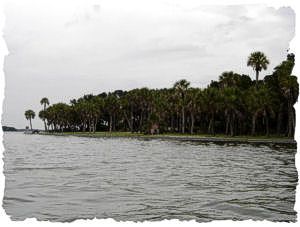 Fort DeSoto has much to offer beachcombers and daytrippers. It boasts seven miles of waterfront, sugar white sand, several snack bars and a 12 foot wide, 4 mile long asphalt recreational trail for walking, biking and skating. Another highlight is the actual historic fort, complete with cannons and mortars.

Fort DeSoto Park has much to offer the sea kayaker as well. The 900 acre county park is made up of 5 interconnected islands called "keys". Mullet Key, the largest of the islands is the focus of this trip.

By circumnavigating Mullet Key, we were able to experience many different types of saltwater environments. North of Mullet Key is very shallow with a seagrass bottom. The east (Tampa Bay side) has course sand and shell beaches while the south (Gulf) side exhibits those fine white sand beaches which has made it a top rated beach destination. To the southeast, the Egmont shipping channel separates Mullet Key and Egmont Key. This waterway is traveled by some of the world's largest ships and reaches depths of over 90 feet.

After getting some info from the Fort DeSoto County Park Headquarters and despite some heavy cloud cover, we launched at the kayak outpost into the protected waters of the mangrove. Air temperature was in the low to mid 80s with high humidity. There was little to no wind but an occasional slight breeze provided periods of relief.

Tom and I paddled a rented Old Town Loon tandem and within just minutes of the launch, we began to see and hear manatees in the clear dark waters of the mangrove. The manatees were rather large but reclusive. A few times, in about ten minute intervals, their heads surfaced a few times before they splashed down under the water and finally disappeared. Unfortunately, they submerged too fast for me to get pictures. As we continued our paddle of the mangrove and out into the Mullet Key Bayou, we observed some large mullet jumping out of the water and one nearly flopped into our kayak!

After a mile or so of paddling the western shore of the bayou, we rounded the point and entered Bunce's Pass just below Shell Key. We paddled westward past the point and after just a short distance we could see the crystal clear waters of the Gulf of Mexico just up ahead. Exhilaration is the only way to describe the feeling of seeing that calm, crystal clear blue water ahead.

As we made our way toward the Gulf, we explored a few small canals along the way. On the shores of the canal were some very nice picnic areas. Some were bulkheaded and some had white sand beaches. The area was complete with picnic tables and palm trees.

After a short exploration and chat with a park ranger, we headed out a very tame inlet into the very calm open water of the Gulf of Mexico. After paddling out about 100 yards, we paddled northward up the coast of the pristine north beaches and landed for a short break. The sand was the brightest white and the finest grain. The texture and grain of the sand was very fine and soft on the feet. The grains were just a bit larger than powdered sugar. Since it was a bit cloudy, there were very few people on the beach. 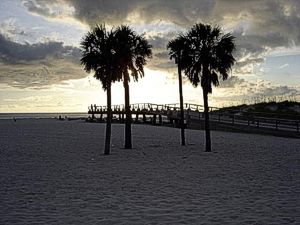 After a quick lunch and drink, we launched off the beach and continued our northward trek along the coastline of the pristine beaches. On our offshore trek along the coastline, we had the beaches to our east and to our west we had a spectacular view of the endless water of the gulf out to the horizon. During this portion of our course, we observed a few pods of dolphin within a few yards of our kayak. There were also plenty of pelican flying around. The water remained very calm and we could see some severe storms beyond the Tampa area. Luckily the storms appeared to be moving northward away from where we were paddling and we were never affected by the storms.

After 3 miles of paddling along the shoreline, we neared the Gulf Point fishing pier where we landed to explore a bit more. A snack bar on the pier provided the welcome relief of an ice cold drink and a hot soft pretzel. We soon launched again and after rounding the point, we entered the open waters of Tampa Bay. We could see the enormous Sunshine Skyway Bridge to our north as we paddled northeast offshore along the east beaches of the island. These beaches looked like your typical tropical beaches with more white sand and more palm trees.

We soon passed another pier in the bay and just continued paddling for another 3.5 miles before we reached the next point which we rounded and continued a northwesterly course towards the bridge at Bunces Pass. As we headed due west to go under the bridge, we heard dolphin squeaking and within minutes we saw them surfacing very close to our kayaks. Within a few minutes they were gone as they headed back out to the gulf. After paddling under the bridge back into Bunces Pass, we took a southerly course back into the bayou. During some exploration of the bayou we saw lots of egrets and a few great blue heron. As we neared the end of our course, the sun began to poke out.

We made our way back through the mangrove and finally to the takeout. We landed safely at 4:30 pm and after 14.3 miles of circumnavigating Mullet Key.

Camping is available in the park while there are many hotel/motel accommodations in the nearby St. Petersburg and Tampa area.

Interstate 275 to the Pinellas Bayway. Follow Bayway right into park.