I figured on getting out early but didn't launch until about 10:30 AM. The sun was bright and there was a cool 85 degree breeze. Yes, that's cool here in the south for this time of the year.

My wife and I loaded up our modified Grumman G17 with some water and snacks for my two boys and headed up river. There were some others launching at the time, but they were headed down river. A minute after launching my wife asked "how come we are the only ones headed up river". My answer was that we were headed to see the old Hanna Ward bridge. There is local legend about a young girl and her daughter in that area. The first version I read was that the girl was running from some Indians and jumped off the bluff there to avoid other forms of certain death. The second is that the girl was driving her horse and buggy over the bridge when a wheel broke and they were thrown off the bridge to their death. Both sound possible but some say late at night you can here a baby's cry. 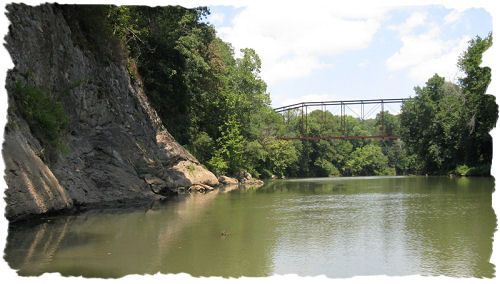 So we paddled the 5 miles up river through several shallow spots were the current was so strong that we had to push. We had spot deer and many alligator gar. The views were great with the exception of the occasional tire or four thrown into the river. The ride up was quiet and smooth until we got buzzed by an overpowered sheetmetal displacement hull. We managed to ride the 2ft wake with no problem. We arrived at the bridge to see a 60 ft or so bluff to the west and a low farm field to the east. The bridge I guess was built in the 1920s and shut down I was told in 1982. The structure was intact, but the wood plank road bed was mostly gone.

My wife and I were wore out from the quick paddle up river and decided to head back. At that time the wind changed direction and now we faced a head wind. The paddle back seemed just as much of a work out as the paddle up, but I guess that's why we like paddling.

We made it back to the boat ramp at 2:30 and not a moment too soon. No not a down pour of rain, but a 3-year old melt down in the middle of the canoe. He fell asleep as soon as his car seat was buckled.

This run can be floated from the hwy 31 bridge or anywhere in between, we just didn't have time to ferry cars back and forth.

Take HWY 31 north of Ardmor, TN to HWY 273 west. At the end of 273 make a left at the stop sign and go about a mile to the veto rd bridge. On the far side of the bridge is parking area and boat ramp