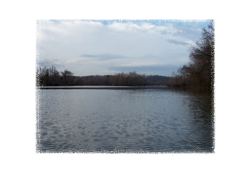 We met at the Dutch Gap boat landing at 6am, got the boats rigged and paddled for about two miles downstream in the spring-like weather in the middle of winter. There was a light fog on the water, and I was glad for the white marker light on my boat. The James River at this point is home to full size cargo ships, so it pays to be seen.

After we cut off the river and up the old channel we passed Henricus park and cut into the backwaters of the conservation area, up a canal and into an old gravel pit. We had timed it perfectly, and the sun was just breaking free of the fog's morning hold and pulling itself sluggishly into the sky. My friend had heard from the duck hunters that the striper were rolling hard every morning at sunrise and we had planned to be there. Well, here we were.

I was paddling my Wilderness Systems T160i SOT fully rigged for fishing. Would you believe a Garmin fish finder? I had just gotten an Orvis 7wt Zero Gravity fly rod and was anxious to hook something with some size so I could see if they are all they are cracked up to be. The air temperature was in the high 50's and although they had predicted rain all day, the air was crisp and clean and the day couldn't have been prettier. I was dressed in Bass Pro waders and a t-shirt, but had a paddle jacket in the pouch behind me, and a drybag with towel and dry clothes, just in case. Been there, done that.

The water in the pit was flat and calm and as we watched a fish would break here and there. We would sprint to the general area and cast to the breaking fish. No luck. I didn't care. It was December 23, 2006, and I was in shirtsleeves, casting a Zero G 7wt at breaking striper. By 10 o'clock I had had one strike, but it had been a good one. The striper had torn the bright red collar off the fly my wife had tied the night before (especially for this morning's trip) and stripped the feathers from one side of the hook. No one had hooked a striper but my friends had both switched to catfish. By noon they had caught several, and I had decided the day was another of those practice your casting over water days for me, and wrote it off as a "Great thing about kayak fishing is when you don't catch fish, it's still a great day paddling" days.

The Conservation Area is home to Blue Heron Nesting and hoards of wildlife including ducks and buzzards, deer and an occasional Bald Eagle. We were lucky enough to see them all. The Eagle sat proudly in the top of a tall tree alone on a small island, watching over the area. He wasn't shy, and seemed to pose as I took his picture over and over. He turned his head this way and that and preened a bit. The joy of a kayak is that you can glide right up on wildlife and get some beautiful shots. 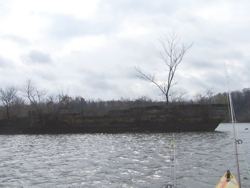 As we paddled farther back into the area, and the tide moved out, the area gave up her most precious secret: her own ghost fleet of historical barges and tugs. Years and years of barges and tugs have been abandoned here, and here they remain. Some have been here so long that trees have actually grown in their hulls. I am told that the fleet has gotten smaller as the steel hulled barges have been salvaged for scrap, but these old wooden hulled classics are here to stay. I found a majestic beauty in these hulks as we paddled around them, and can't wait to come back and spend more time exploring, taking more pictures and seeing all that there is to see.

This is something that you must do in a kayak, the depth on my Garmin read 1.2 feet at times, and the fleet is only fully visible at LOW tide, sleeping below the surface when the tide rises again. A unique sight is the trapped grass and soil three feet above the water when the tide recedes, perched on exposed structure rods where a wooden barge no longer exists. Something to keep in mind when you paddle through the graveyard on a receding tide, and something that makes that Garmin more valuable in this area, as it shows that bottom structure.

My Zero G and I will make the trip again. Fish nearly leapt into the boat as we paddled the perimeter and in among the hulks, but my friend and his son had family due in from out of state, and we had a long paddle ahead of us to the boat ramp. This is a trip that I won't soon forget. Seriously... we logged a lot of miles and I could barely move the next morning. Hah

I would suggest you bring a large tarp and cover your car, truck. My friend returned to find that buzzards had eaten the rubber gaskets around his doors. They are also known to attack wiper blades. I only suffered poo and puke on the paint which washed off -- Forester gaskets are internal behind the window glass.

Take route 1/301 into Chester and watch for the Sign for the Dutch Gap and Henricus Park area. Turn onto Route 615 East and follow the signs to the public boat ramp.

You would find the ADC County of Henrico or Chesterfield Maps or the Lower James River Map helpful as the Conservation area is clearly shown on the map. The ships are not shown though.