by  Zooman
A self-supported trip created by Zooman 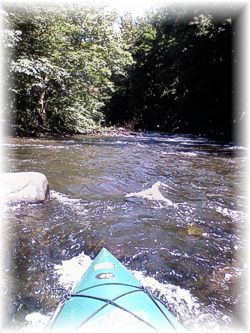 I put in by the Amtrak station just south of the Metro-North Croton train station. Parking is free for paddlers. The entire trip took a little over an hour and a half.

I started at about 11:30 a.m. among outgoing and eventually dead low tide. I had to portage over a low spot just past the highway overpass, but only for 30 yards or so. Once back in, the river was smooth, but the current was working against me.

There were a couple of large swans just to the northwest in the reeds before getting to the manor house. I also saw the beautiful blue heron that has been a resident for some time now.

Paddling was sort of a chore, especially where the current was very strong after the first little island. I didn't have to get out, but I wasn't sure if I would be able to make it through to bigger island by the rapids or not.

I finally made it to the rapids, and I decided to get a little adventurous despite only wearing khaki shorts. But I was wearing a PFD, which is a must when paddling the Croton River.

I got out by the shore at the bottom of the rapids. Yes, I did get a little wet. The rapids were almost Class 2 at this point. I decided to pull my kayak up a hundred yards or so amongst the large rocks and boulders that littered the rapids. I started video recording the voyage with my cell phone. What a mistake. I almost flipped over half way down. The river took control at this point and all I could do was balance with the paddle and try to avoid the huge rocks without leaving green vinyl all over the place.

I did pretty well for my first time in the rapids with a kayak that's not designed for the rapids. My 9'6" Old Town Otter got me through without capsizing. I had so much fun I did it twice, but I wouldn't recommend it for the beginner or average paddler. It wasn't easy.

After playing around for half an hour, I made the slow, relaxing paddle back to the put-in spot among a mostly slack tide that was beginning to flood by the end of the trip.

Overall, it was a fun day and now I have some exciting video to prove it.

Rt. 9 to Croton train station. Drive through pay parking lot to the end by Amtrak train station and put-in spot.