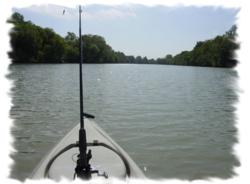 Saturday was fantastic! The wife and I pulled in at Cooks Canoes, in Webberville about 15 minutes east of Austin, and were on the water by about 11. Our goal was to reach Hunter Island about 9 miles down stream by evening. We started fishing right at the dock but they weren't biting.

We made our way downstream slowly taking in all the sights and reached Cooks Island by about 1-2ish. We hit Lower Webberville Park 5 miles downstream by about 4. We continued down stream seeing a lot of nice islands and wondering how far Hunters Island was. By about 5, we were pretty tired and decided to find a place to camp for the night. We picked a spot near a creek inlet that had cows on it and plenty of dead fire wood. We set up camp, started a fire and had a delicious meal of steak and jumbo shrimp. The evening was great! About 11 pm we awoke to extremely high winds. The temperature had dropped. I put the rain fly on the tent and we warmed up very nicely. 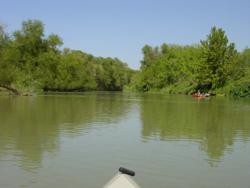 The next morning was windy and cool, but we brought warm clothes so we had no problems. After a leisurely breakfast of fresh eggs and corned beef hash (and four cups of coffee) we set out. The wind was at our back so paddling was no problem. After a while we realized that Hunters Island was another mile down stream from where we camped. We stopped and checked it out. I was not impressed. The water was so low it wasn't even an Island, and a lot of ATV's had been riding on it from the homes that overlooked it. In fact, the water was so low that we got stuck on sand bars in the middle of the river on several occasions the second day and had to get out and walk over them.

The fish started biting on senkos and curly tail grubs dragged on the bottom at about 11 on day two. I got one small one to the surface before he jumped off. The wind finally shifted and we had to fight for speed. We saw lots of wildlife, including blue herons, cranes, deer hawks and harmless water snakes. One bald eagle swooped over the water in front of us on day two.

We got to the take out at 3:30 and Cooks was there in 20 minutes to bring us back to his shop. The wife was a trooper. I know she was tired both days but she too had fun. She wants to do it again. Next time, I think we'll only go to Cooks Island (owned by Cooks Canoes and set up for Kayak Camping) then take out the next day at Webberville park. That is about a five mile trip versus the 17 miles we went. It will also give us plenty of time to fish and see the wildlife.

There were no rapids to speak of. The Colorado is great for the beginning canoe and kayaker. More homes are being built on the water than there were 10 years ago, but there are still lots of stretches of undisturbed land much as it was 100 years ago.

Be careful to clean your campsite completely and leave no trace. If you must camp on private property be respectful of it and get the owners permission if possible. Take a water filtration pump. Even though there was plenty of firewood, take along a small camp stove in case the winds are too strong, it rains, or a burn ban is in affect. Our stove came in handy Sunday morning with the high winds. Best time to go is Spring or early fall. Summer is too hot and Winter too unpredictable.

Plenty of sand bars and islands to camp on, but cows may also use the island.

Cooks charged us $20 for one Kayak rental and $20 for the shuttle back to our vehicle on Sunday. They were very good to us.

15 minutes down Ranch Road 969 east of Austin in Webberville at the Webberville County Park.