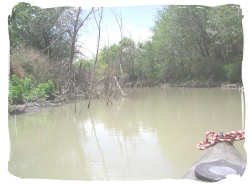 On the afternoon of April 29 and the early morning of April 30, 2006, I paddled the old river channel at the back end of Choke Canyon Reservoir. For those not familiar with it, Choke Canyon is south of San Antonio, just to the west of IH 37 near Three Rivers. I put in and took out at the Bracken boat ramp maintained by Texas Parks and Wildlife. It is located off Highway 72, west of that highways intersection with FM 99, almost all the way to Tilden.

I learned something new on the trip. When paddling in a swamp-like environment, stick to the outside of bends, the better to see what is ahead and the better to be as far as possible from what may be resting on the inside bank. When gliding around a bend, in retrospect far too close to the inside bank, I saw an alligator at the same moment he saw me. He was roughly the same length as my 14-foot kayak, and he was closer to me than that length. That is, from my perspective at the time, he was immense.

In a flash, he headed for the water while I mainly shook. Lucky for me I was not between him and the water, because he moved so fast, I had no time to react. I had hoped to take pictures of alligators, but I had envisioned them smaller and farther away. As it was, he was long gone before I gave any thought to the camera. 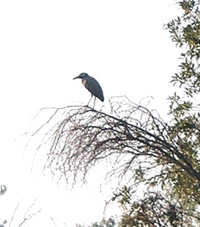 That encounter aside, the area is a birding and wildlife paradise. I saw far more birds than I could identify, though those I could identify included owls, hawks, herons, egrets, and redwing blackbirds. I saw turtles, water snakes, several deer coming to drink, and even a few turkeys. I adopted the technique of observing what I could after coming around a bend, then building up a head of steam, and gliding silently around the next bend.

The lake was at about 216 feet. The maximum capacity is about 220 feet. A few more feet would have opened up even more channels for paddling, but as it was I found many sloughs and twisting channels to explore. The wind was high enough in the afternoon, even back where I was, that a kayak would be preferable to a canoe. 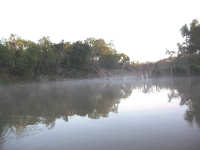 Dont let my surprise encounter discourage you. The area is beautiful and will have water when the Medina and the Guadalupe Rivers are hopelessly low. And the fishing is pretty good. Regrettably for me, there was a bass tournament the weekend I was there. Otherwise I might have seen more gators.

Camping is available at Choke Canyon State Park.
Motels are available in Three Rivers.
Tilden has a motel.

The $3 to park at the Bracken ramp is on the honor system, but I saw a park ranger checking and ticketing people who did not pay.

From San Antonio, drive south on IH 37 to Three Rivers. Then take highway 72 west, skirting the lake on the south side. You can use any of several lake access points, but I used the Bracken ramp, which is almost all the way to Tilden.

Any Texas highway map will do, although the boat ramps will not likely be shown.

If you'd like to see more pictures of Choke Canyon Reservoir, you can link to them here.