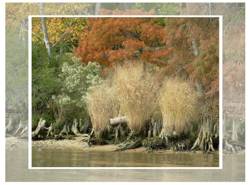 My plan for this return trip to the mouth of the Chickahominy River was to visit some derelict vessels, then cross the James River and search through fossil shell-hash beaches fronting Broad Swamp. Last time, explorations had been cut short by Thors hammer in the middle of the river. As an amateur naturalist, I was astonished to see a fluffy cloud evolve into a growling thunderstorm in just 20 minutes. But as a meat-bag, I was deeply concerned that my only option was to keep frantically waving my aluminum-shafted paddle. After that trip, a fiberglass paddle seemed a cheap investment.

On this visit, conditions looked great from the landing at Chickahominy Riverfront Park. The weather was clear with little wind. Looking right, I could see a natural river, alternately bordered by marshes and forest reaching peak Fall color. Most of the west banks belong to Chickahominy WMA, while the right banks are too low and wet for development. Looking left, behind the Rt. 5 bridge, the riverfront is a mixture of woods and homes. On this clear day, I could look down the mouth of the Chick and across the width of the James River where the late-morning sun illuminated the cliffs near Sunken Meadows Beach. Gorgeous.

Heading downriver, the outgoing tide quickly pulled me past the bridge. Todays high was to be about 70F, but the fresh water was cooler than that. The Chick is always muddy, and todays visibility was only 4. Not far past the bridge, I realized Id left my tan life-jacket on the tan beach. I want to blame it on the rush to get in the water after almost two weeks of kayak-celibacy, and distraction from the old boys on the pier (yah goin fishin?). But there was nothing to do but go back, staying to the edges of the channel where the current was negligible. Feeling like a complete idiot, at least now I was thoroughly warmed up. 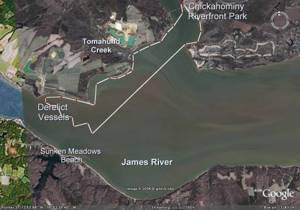 The Chick becomes shallow as the mouth opens wide to meet the James River, so its choppy in a light wind. Today, I saw little fish activity. On last summers visit, I saw so many large fish doing sea-serpent rolls in the rough water, I was worried one would end up in my SOT.

Following the western shoreline, I saw eagles and blue herons, took some pictures of the Fall color, and examined an ancient bald cypress with the core rotted out. This area is so shallow that you cant hug the shoreline except at high tide. Sandy beaches are frequent, but I was also surprised by the sometimes rocky bottom. In this part of Virginia, even gravel is a little unusual. Youd sooner expect to find a meteor than a bed of boulders.

Born in the Blue Ridge mountains, these extremely tough Chilhowee sandstone boulders were rounded in a stream, then apparently washed about 200 miles to reach this point. Since the lower James River cant usually move rocks the size of bed-pillows, it is a bit of a head-scratcher how they got here. Some of the same rocks appear at 40 elevation in the Tabb area on the James-York Peninsula. (Not knowing what to do with the larger ones, we put them next to our mailboxes or driveways and pretend they are decorative.) It makes me wonder how large a flood can get in the James River basin. A geologist in the 1930s had the intriguing idea that the boulders might have had help, riding downriver stuck in ice floes which, on melting, dropped the boulders.

A flock of 100 Canada geese rested in the middle of the river, began honking, then took off together. The mouth of Tomahund Creek is a nice area, with bald cypress trees, ospreys nesting in summer, and a sweeping view of the James. Wood- and marsh-bordered Tomahund Creek itself appears worth a future exploration on a rising tide.

Rounding Dancing Point, I entered the James River and became exposed to the SW wind. The area is shallow, full of snags, and private rip-rap only adds to the chop. A truly unique home sit on the point, spread over enough high-windowed cabanas to make the owners take heart medicine before reading the utility bill. It seems silly to put an expensive glass house where it is sure to be raped by noreasters, but I have to admire their courage in thinking of a home as more than one or two adjoined boxes. 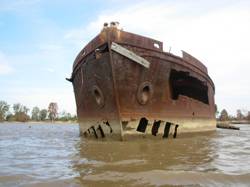 I struggled against the wind and tide of the James River for 1+ miles as I approached the derelict vessels near Sandy Point. The largest, made of steel, was about 75 long. Rectangular holes had been cut in the hull to keep her from floating away. Peeking inside, I saw pigeons roosting on a shelf for a nanosecond before the room exploded in feathers. After the air had cleared, shafts of sunlight crossed a rusty room with a metal ladder going up the opposite wall. In the middle of the room, just a hop across a stretch of water, was a wide mound of reddish-brown clay.

I moved to a cut-away large enough to crawl through, but first tested the foot-high mound with the tip of my paddle. The paddle passed through as easily as if I were stirring a warm chocolate mousse. Close one. If I had jumped to the clay mound, Id probably still be stuck there. Apparently, water enters the ship, slows, and drops its sediment load, filling the ship with clay. The daily stirring by the sun and the moon keep it all from compacting. With 20/20 hindsight, derelict vessels probably have many other ignominious ways to kill or injure visitors: breakaway ladders, holes cut in the deck, sharp metal edges, etc. They are fun places to paddle by, but I wouldnt make any plans for a secret club-house. 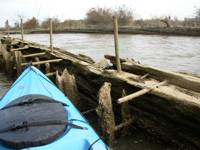 Adjacent and downriver from the steel vessel, lie the remains of several older wooden vessels of about 50 length. Open at the stern, they are filled to their prows with a bed of sediment. Small bushes grow in the nooks and crannies of the wooden beams. No rib and thin sheathing construction here: these 2 thick wooden walls were built to take incredible abuse. The walls were thick wooden beams pinned together by 2 long steel rods. Even longer steel rods pinned the beams together in the vertical direction. You can imagine the shipwrights drilling undersize holes in the wooden beams to avoid splitting the wood, then ramming in enormous nails with sledgehammers. Except for the steel pinning, youd be forgiven for thinking these robust vessels had been commissioned by Noah to carry two of each animal.

Finished with the derelicts, it was time to cross the James River. Claremont Beach on the other side of the James looked tantalizingly close, but between the stiff wind and outgoing tide, my next stop was expected to be a mile downstream. The wind was perpendicular to my new path, but I hadnt yet unfeathered my paddle when a 30 mph gust nearly ripped it out of my hands. Although I always carry a spare paddle, it was sobering to realize that in 2 seconds you could potentially go from feeling in complete control to thrashing the water with cupped hands.

I called it a gust for lack of a better word. The high wind came in a long sustained blow for 30 seconds or so. Then it would drop down to 10 mph for 10 minutes. When the gusts came, you could see the wind slipping across the smooth water, trying to dig in, mottling the surface until it looked like flames spreading across a ceiling. In these moments I would face into the wind, bend over double, and stare at the water in amazement.

You cannot fight Nature, but I hoped to work around her. Could I slip to the far shore between the periods of powerful wind, where I would be sheltered by cliffs? But, just as I reached the huge wind gap at Sunken Meadows Beach, she switched to sustained high winds with only short lulls. Time to pack it in. My only option was to run with the wind to the landing, dreading that before I got there those untiring invisible fingers of wind were going to knead the water into waves big enough to kick my ass.

It was fun to see a speed of 5.5 mph on GPS. That isnt fast enough to pull a skier, but in a loaded Prowler 13, thats still warp factor 12. Initially, the waves werent large due to lack of fetch and time, but they abruptly increased to 3 when I reached shallower water at the mouth of the Chick. Between the wallowing of my kayak, the strange rudder response in following seas, and the steadily increasing fetch, it was a long 3 miles back to shelter.

After passing the castle-like homes at Barrets Point, I slipped into a shallow bay protected from the wind. This allowed me to swing by some bald cypress trees with especially interesting prop roots, and observe the small birds darting from branch to branch. It was a short paddle back to the landing.

This trip is of significant local interest for derelict vessels, bird watching, scenery, beachcombing, and possibly fishing in the right season. The described (truncated) trip was 12 miles in 4.5 hours. Many sand-clogged areas make paddling inconvenient near low tide. The Chick has an impressive tide and qualifies as a big river. Its a recreational magnet due to the fresh water and excellent fishing, so the density of power boat traffic in summer is much higher than on the nearby, much larger James River. Beginners should probably wait until next year. Intermediate paddlers can cross the Chickahominy River and visit Morris Creek from the same put-in.

Theres a fishing pier, camping, a swimming pool, and a small store which sells maps and snacks. They even rent kayaks. However, the small boat-landing is bare-bones. The sandy hand-carry launch site happened to be blocked by a large drift log. The adjacent concrete boat landing is narrow and pitted, barely visible where it slips between trees. There is a larger boat landing in the camping area of the park.

Launch and porta-potty access, all for $1. Pay at the small store/office.

From Williamsburg, VA, head west on Rt. 5 until you reach Chickahominy Riverfront Park. As you enter, the small boat landing is to the left. To pay the fee, drive another block past the landing.

Aerial photos and topo maps from: http://www.terraserver.microsoft.com were useful, as were virtual tours via Google Earth.

The CBOFS wind forecast for the Chesapeake Bay area can be found at:
http://tidesandcurrents.noaa.gov/ofs/cbofs/wind_forecast.shtml
(CBOFS predicts wind speeds 30 ft off the ground, so they tend to be a bit on the high side. While I wouldnt say that the more optimistic wunderground wind reports are wrong, they appear to be more appropriate for someone working in their garage with the door half closed.)