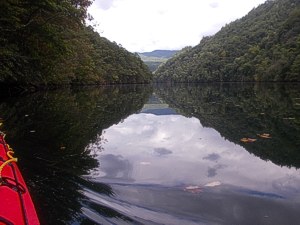 Caulderwood Lake is a small 541 acre lake that is an impoundment of the Little Tennessee River between the Cheoah Dam and Caulderwood Dam near Tapoco, NC. The lake is actually located in the states of Tennessee and North Carolina. The National Forest Service is responsible for much of the land surrounding the lake in the Joyce Kilmer-Slickrock Wilderness Area and the Nantahala Forest. There is a reciprocal agreement between the two states for fishing licenses here.

In early September 2015, I spent a couple of nights and 3 days in the Slickrock Wilderness area at the Slickrock Creek campsite. There is one designated spot but several spots have developed along the creek. There are a total of 5 formal campsites with GPS coordinates on the sign at the Magazine Branch Campground. If the campsites are similar to the one I stayed at there was a tent pad and a fire ring. No facilities other than what was located at the Magazine Branch boat dock and no water.

This lake is a narrow lake and I was always paddling in the shadows of the mountain which was very photogenic. The days I was there, a few thunderstorms popped up but I paddled along the fringes and waited for the lightning to pass. There was at least one hornet nest hanging above the waterline on a tree limb about 4 feet off the water, so watch out for these! There is also camping around the boat ramp.

The water is deep in most places so it is difficult to get out along the bank except a few places, though there is an occasional shelf that is along the shore.

The water was serene much of the time I was there. In the evenings and mornings there was a fog bank that followed the flow of the water which made for some interesting paddling. The water level drops in the evening but rises again in the morning due to hydroelectric operation I assume. The water level drops in Slickrock Creek a couple of feet but I was still able to paddle in and out. I spent a couple of hours hiking up Slickrock Creek and you could spend all the time you want hiking in the Joyce Kilmer Forest if you choose.

The water is very cold, 57 degrees, according to one fisherman so it's tough to swim in. The bugs were minimal in September but there were a few biting flies still around. I was told by one local fisherman that 7 times during the year they drop the water behind Cheoah Dam (Cheoah Lake) for white water enthusiasts. When this happens, parking at the Magazine Branch boat ramp is crowded but Caulderwood Lake is not affected according to one of the fishermen I talked with.

The area was very clean as far at litter on the ground and in the forest. Please follow the Forest Service recommendations about burying human waste, not chopping live wood, and basically pack out what you pack in.

US Hwy 129 is the access to this area and is known as the "Tail of the Dragon" to motor enthusiasts of all sorts, motorcycle, Corvettes, BMW's, Lotus to name a few I saw. This area has a lot of curves and the drivers of these vehicles love the driving experience here. There are multiple turn outs for slow drivers and it is the common courtesy to pull off to let faster vehicles pass.

NO camping fees at this time.