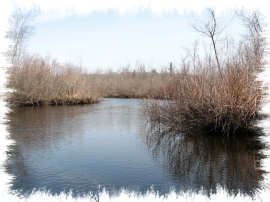 The Bungay River is part of the Ten Mile River Water Shed. Heading north (against the current, which is all but non-existent), a large part of this river is flanked on both sides by about a half mile of protected open space. It is considered the best Southern Red Maple Swamp around.

I've seen painted turtles, gray herons, mallard ducks, swans and geese nesting, multiple other species of bird, and the largest snapping turtle I�ve ever seen in my years in and around the water. This river twists and turns making for a very fun but relaxing paddle.

After the first mile or so you can't hear any of the hustle and bustle of the surrounding small city. I usually don't see a single sign of humans, except the occasional fellow paddler.

For those who like to fish, this river also feeds the local fish hatchery, which leads to some good modest stock trout fishing in the springtime.

There is one take-out up the river. After about 30 minutes of good paddling there is a little path that leads to a little makeshift campsite. While camping isn't allowed it makes a good stop for a mid day snack and stretch.

The further you go down the more technical it gets. There is no possibility of portage, but with some good paddling you can usually get pretty far along. The river then spreads into about a mile of marshland, which is mostly impassable. But when the water is high you can paddle around.

Only one accessable put-in is available.


There is a small path that leads to a campsite in the woods. But is inaccessable except by the water