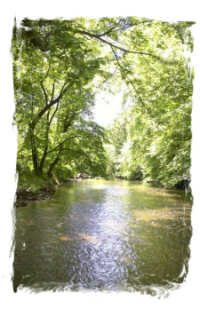 I launched into the East Branch of the Brandywine River from the Harry J. Waite Jr. Nature Area off Creek Road between Hillsdale and Allerton Roads. The parking area has room for just 3 cars, so I felt lucky that only one fisherman was there at 9 am on Sunday.

It's about 30 to 40 yards portage to the river, and the launch is down a relatively steep slope which would be quite slippery after rainfall. Once launched, I headed upstream for 3 hours. I could hear an occasional car go by on Creek Road on my right, but otherwise it was perfectly quiet, except for the birds and burbling water.

In most areas the water is several feet deep and the current is easy to paddle against. However, there are several stretches of very shallow water where it is impossible to stroke deeply enough to overcome the current. (Most of these sections come in the first half hour--I almost got discouraged and turned back, but am glad I persevered.) These I waded, pulling the kayak behind me. Since the sun was shining and the birds were chirping and the leaves were rustling all around me, even this was a pleasant experience.

At one point, a huge tree trunk barred the way, leaving just barely enough room to squeeze by underneath. I continued north, and stopped to chat with a older couple crossing the bridge at the Stroud Preserve. They told me to keep my eyes open for Deborah Rock on my left--legend has it that years ago a young woman leapt from the rock to her watery death when she was jilted by her lover. They say you can still see her footprints in the rock. I didn't see the footprints, but I did see the rock (it's about 25 feet high). The couple also said that no outfitters run shuttles on this section of river, which explains why I had the entire Brandywine to myself all day (except for a couple of fishermen on the banks). What a luxury!

Leaving the Stroud Preserve behind, I continued north, under the bridge at Route 162, and stopping for a snack on rocks overlooking some tiny "rapids". I climbed through these and then another set of minor rapids and stopped just beyond the sewage plant on Creek Road (OK, that doesn't sound very scenic, but in fact, you can't see it--or smell it--from the creek at all. I knew it was there only because I bike on Creek Road all the time).

There are several wild acres of young forest/undergrowth between the river and the plant, and that area was just as scenic and pristine as the rest of the paddle. At that point I was pretty tired from paddling against the current for 3 hours, and turned around and enjoyed a slow, lazy drift back to my put-in. Paddling upstream really makes you appreciate going downstream! It was especially fun gliding over all the shallows that I'd had to wade going the other way, and shooting the tiny rapids. I took a ton of photos in the first hour; will try to attach them to this trip report.

Parking for 2-3 cars. Trash can. River access. That's it.

From West Chester, head west on Route 162; turn left onto North Creek Road; the Nature Area is about 1.5 miles on your right.
If you get to Allerton Road, you missed it. Go slow--it's tiny and easy to miss.