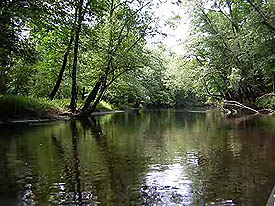 The Black river begins where the Great Coharie Creek and Six Runs Creek flow together in Sampson County, NC below Hwy 903 at Carter�s Bridge. The section that was run for this one night camping trip was started 5.5 miles below the headwaters of the Black River at Clear Run Bridge, Hwy 411. This is where the USGS gauging station is located http://waterdata.usgs.gov/nc/nwis/uv/?site_no=02106500&PARAmeter_cd=00065,00060.

The morning started off as usual which is a tradition of getting a sausage and egg sandwich and ham biscuit to go at Lakewood Restaurant, in Roseboro. The owner, Tommy, when he sees the red truck with the red canoe, starts preparing the food so when we get to the drive up window, it is already for the ride to the put in at Clear Run.

The water level on Saturday, July 2, read 4.5 ft with a flow of 434 cfs and dropping. George Walker, Sandy and I unloaded the canoes and gear, and after the shuttle down to a private landing called, Jackie�s Landing, we launched the canoes for a 15.5 mile trip. The weather was sunny and hot and we knew there would be some swimming breaks. We were hoping the water was low enough for some nice sandbars for both swim breaks and camping.

At noon we stopped for lunch and a swim on a nice but small sandbar above a river community known as Mossy Log, North of Hwy 41 Bridge. All along the banks were pink flowers identified as Swamp Loosestrife or Water willow, also along the banks were vines with red Trumpet Creepers, also know as Hellvine and Devil�s Shoestrings. We passed under the Hwy 41 Bridge, which is 6.4 miles from the put in. After nine miles and not finding any suitable sandbars, we camped at the river�s edge in a thicket of trees. 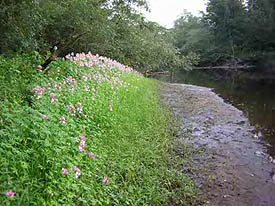 After setting up camp and gathering firewood, all of us went for a refreshing swim. After the swim the drinks and hors d�oeuvres of chips, salsa, cheese dip and smoked oysters with crackers came out. After another swim, the small grill was set up for the night�s meal. George eating steak and macaroni and cheese, and Sandy and I feasting on lemon pepper pork chops, roasted garlic potatoes and salad.

Around midnight, the rains came for about and hour and cooled things off but in the morning the river did not rise, in fact dropped according to our water gauge made of a stick we had placed in the river the night before. After breakfast of eggs, country ham, and grits we packed up and headed down river. The weather the last day was cloudy with sun coming out every now and then passed under Newkirk�s Bridge on Wildcat Road, after a total of 12.3 miles. We made the takeout at Jackie�s Landing about 1 pm with a total mileage of 15.5 miles.

The river was scenic with cypress trees, the flowers previously mentioned, and wildlife seen was a deer, some otters, beaver, and many birds, to include hawks, kingfishers, and other bird life. This is any easy flat-water trip and we had no portages and no trees to scoot over at this water level.

For a longer trip, an alternate take out would be at the NC Wildlife Access boat ramp at Ivanhoe, NC.

No fees, but permission from land owner to put in below bridge, unless you want to park at bridge and go down embankment.