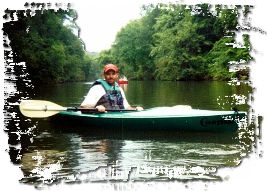 On Saturday June the 30th. My 15 year old daughter & I loaded up the Pungo & the Caspia and headed for Hackleburg, Ala. for a run down Bear Creek. The church youth group had made plans to canoe down it, so I figured I'd just tag along. The only kayaking I've done is on still lakes mainly fishing for bass.

Around 1:00 PM, we were dropped off at Rock Quarry & were to be picked up 4 hours later at Military Bridge (third bridge). My daughter was in a Pungo & I was in a Caspia. About 30 minutes into the run the thunderstorms set in & it rained about the whole trip. I can't believe some of them in the canoes didn't windup with snakes in their canoes after all of the over hanging brush & tree limbs that they ran through.

Just past the Hwy. 43 bridge, are the remains of an old bridge. You go left due to rebars sticking up on the right side. The left side is shallow, so when the 1st canoe ran aground, the others including my daughter, just pilled up against each other like a log jam. After clearing up the jam, it was a scenic float with some mild rapids here & there. The group got split up, 3 canoes were way ahead of the rest of the group. I kept on expecting to see them on a sand bar waiting on us. 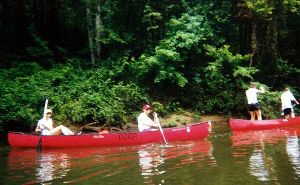 With about 30 minutes left in the run, the rains finally stopped. About 5:20 PM, we reached Military Bridge, seeing only one of the 3 canoes that were leading. The 1st two canoes passed the bridge & the next bridge or pickup point was over 3 hours away. They had no food or water with them. Luckily it was still cool & overcast from the thunderstorms. The Shuttle driver arrived, so we loaded up & were dropped off at the vehicles. The shuttle driver went down to Scott Bridge to wait & see if the other 2 canoes would show up. They told us that if by 9:00 PM nothing has been seen out of them they would call 911.

So after 8:00 the van drove up with the 2 canoes & 4 people. What had happened was that when the boy & girl (both college age) in the 2nd canoe realized what the kids in the 1st canoe had done, they followed , caught up & kept pushing them to make it to the 4th bridge in good time (less than 3 hours). So all in all everyone had a GREAT time & we all learned a few things. I'm ready to do it again.

If you own your own boats, $10 for shuttle service. Rental rates vary.