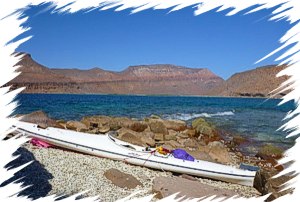 25 miles round trip from Playa el Tecolote on the mainland to Isla Gallo (Cock Island, a small island just off the coast of Isla Espiritu Santu).

I rated this paddle as difficult, because of the distance involved.... mainly the 5 mi channel separating the island from the peninsula. It took me 90-100 minutes of steady paddling to cross. The channel can be very windy at times, with choppy waves. Since you may have to wait out the wind on the island, be prepared to camp, and bring PLENTY OF WATER. There is NO water on the island.

Today was perfectly calm, so I decided to paddle again to Espiritu Santu Island. I hoped to go further than I had before, and perhaps go all the way around it, which would probably take two days. To give myself that option, I packed plenty of water and food, but took only the bare minimum for campingno tent, sunshade, or cooking gear. I learned my lesson from the previous trip, about taking too much cumbersome gear. Still, packing took some time, so I didn't leave till about 10:45 am.

I made good time across to the island, then continued north along the west coast.

Slowly, a head wind was increasing. I was feeling energetic and making good progress against the wind, until about 3:00 pm. By now, I was in new territory. I was passing some large bays I hadn't seen before, and two islands whitewashed by birds (appropriately named Cock Island and Hen Island) where coming up on my left. But suddenly I began to feel sunburned, tired, and confined. So I decided to haul out and rest in the rare shade offered by the cliff of the further island.

There arent supposed to be any biting insects in Bajabut as soon as I landed, a number of black flies began to bother me. I rested, ate, and drank in the shade. And swatted the flies, that probably would be feeding on birds, if not on me. Nevertheless, the flies persuaded me not to try and round the island or spend the night.

After resting about an hour, I felt renewed, and headed back. I set my sail in the moderate breeze, and coasted for an hour and a half. Sailing is nice, because it gives you more opportunity to look at the scenery.

The wind dropped to a level with which I could make better progress paddling, so I stowed the sail. Soon the wind shifted around to a headwind, but not enough to slow my progress.

I crossed the channel, finding the swells building to three feet, and very chaotic. But they weren't steep enough to break over the cockpit, and so I went most of the way without even attaching my skirt. I arrived back at the trailer shortly after dark. Mexicans on the beach were surprised to see this large, white sea creature come out of the dark and beach itself. One remarked about the "big fish." 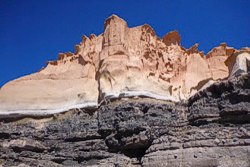 It was a good paddle. I chatted with the RVers nearby. One said he had checked using Google Earth, finding the channel was 5 miles wide. If so, that puts my days paddle at about 25 miles, round trip. And I wasn't very tired--not even sore the next day. But I did go to bed early. Sleeping in the clean trailer sure beats swatting flies on the beach. When I shut my eyes, my minds eye was filled with towering pink cliffs, circling black frigate birds, and blue waves.

See more photos of this and other Baja paddling trips on my blog:
www.bajajournal.blogspot.com

Outfitters are available in La Paz. Motorboats to transport you and your kayak to the Island are available at Playa el Tecolote, which faces the island.

A day permit and small payment for the island, which is a reserve, is required. You wear a bracelet which shows you have paid. The permit is available in La Paz.

Drive north out of La Paz on Malecon Street. Continue past the ferry port. The total distance from town is 15-20 miles to Playa el Tecolote, the launch point. Leaving your parked car is safe if you park away from the restaurants, among the RVs, and let the RV people know what you are up to.