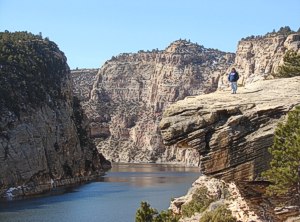 The upper end of Alcova Lake (reservoir) is Fremont Canyon, a narrow, drowned canyon 3-1/2 miles long with sheer walls hundreds of feet high spotted with juniper/pine trees, caves, grottoes, & arches high above the water. The water is clear and cold, as its source is the bottom of Pathfinder Reservoir upstream, either from the discharge valve at the base of Pathfinder Dam, or from the hydroelectric generating station at the end of a 2-1/2 mile tunnel ending at the tail waters of Fremont Canyon itself.

We unloaded our canoe on a small shale beach @ LAT 42.516600 LONG 106.773684 near the Alcova Launch at Fremont Canyon Campground just north of the Canyon mouth. Although we dropped the canoe off between two campsites, we parked our van at the paved parking lot to the southwest afterward so as to not crowd the campers. We judged that loading/unloading would be unobtrusive, but leaving our vehicle for several hours fifty feet or so from the encamped RV's would not.

Our paddling route took us 75 yards south along the shore of the main lake, then to the right and southwest up the Canyon. The first section of the canyon is around 400' wide and extends three-quarters of mile straight southwest before breaking left. Since the prevailing wind is also from the southwest, and the vertical shore complicates self-rescue, winds over 20 MPH here can make travel in an open canoe difficult, even dangerous.

After 1.5 miles a small bay with a wooded saddle above appeared on the right at LAT 42.498816 LONG 106.781857 (Section 9, 29N-83W) that looked like a good primitive camping spot. Although we had no time to land & scout this site, it looked like one of the few places in Fremont Canyon level enough to pitch a tent. There were some small coves elsewhere where a kayak or canoe could be pulled out of the water and a hammock strung on a slope between the pines or junipers, but privacy would be an issue with all of the motorboat traffic. 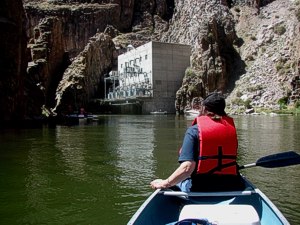 3-1/2 miles of paddling up the narrowing Canyon put us at the Pathfinder hydroelectric plant, where several powerboats were anchored & fishing successfully for trout below the Plant discharge. We moved on, however, trying to avoid the unpredictable "boils" in the power plant discharge by paddling against the strong current on the left (facing upstream).

The 400 CFS trickling down through a "boulder garden" into the tail waters just above the power plant was enough to let us paddle up the river a few yards before turning back. As we continued downstream we tried a fast transit over the boils below the turbines, but the discharge current pushed us hard towards the canyon wall on river right, almost upsetting us. Ironically, the downstream float here turned out to be more hazardous than the strenuous upstream paddling!

The water throughout the Canyon was clear and green, a nice contrast to the red & white cliffs dotted with juniper and pine trees. The coves and side canyons were small and not likely to offer protection from high winds and waves, although there were some overhangs on the main channel that could shelter boaters from rain.

The motorboat traffic picked up considerably as we headed back around noon. The wakes varied depending on the motorboat's size, speed and hull design, with large deep-vee hulls at 10-15 knots putting out the largest, which could not be traversed in parallel. As usual, the faster, hydroplaning boats put out very little! Although we spent only about 5% of our time turning to face wakes while paddling into the Canyon, we had to spend 10% to 30% of our time doing so while returning.

The power boaters were friendly, inexperienced young families who often didn't know when to slow down and when to accelerate again to avoid "waking" us. Their efforts at speed management sometimes made their wakes worse, even though they meant well. Unfortunately, the sheer walls of the canyon didn't dissipate wake energy, but reflected it back and forth, building higher with each new boat passing by. Even with little or no wind in the last mile of our return, there was a confused pattern of chop three feet high just from the boats! Had there been no limit to the number of boats there probably would have been no limit to the height of the waves/chop inside the canyon � a sobering thought! Fully 50% of the time to cross the last 1000 yards of our return was spent orienting against wakes, extending the trip by at least a half hour. Worse, with wave addition/subtraction, rogue waves up to five feet high began to pop up with little warning! Luckily there was no wind to speak of, so we were spared whitecaps. 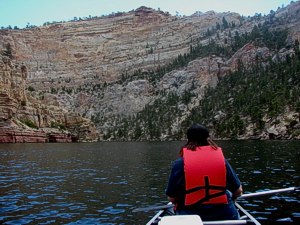 We were amazed to find only a 1/2 foot swell on the main body of Alcova Lake when we returned, but we quickly figured out that wakes there either disappeared into the distance or were dissipated by crashing on the nearby beaches. It was still possible for a careless paddler to get swamped by a breaking wake over a shallow gravel bar or a rock, but thankfully, our finale on the main lake was uneventful - we even had help from a motor boater camped at the Launch in car-topping the canoe!

Fremont Canyon is a beautiful place, but for a more enjoyable paddling experience it's best to go during the swing seasons of spring & fall, on summer weekdays, or to conclude your summer weekend paddling before 12 noon! Remember that while power boaters are generally friendly, they're often inexperienced in managing their wakes around paddle craft. Since there are far more of them anyway, it may make sense to leave the Canyon, at least during summer prime-time, to the larger boats.

Alcova Lake Dispersed (undeveloped) camping is unofficially allowed at Alcova Lake if you use a firepan and pack out your ashes & trash, dispose of human and pet waste 200' or more from the water, don't ditch your tent, & don't cut living wood. The Lake Shore is patrolled by deputy sheriffs, by the way. The same "no trace" camping standard applies for BLM land in Fremont Canyon as well.

No fees for day use, $10 to camp at developed sites.

34-35 miles SW of Casper on Highway 220, turn left onto Lakeshore Drive and toward Alcova Lake Recreation Area. Drive all the way (4-5 miles) past all campgrounds, Alcova Marina, etc., to the paved parking lot at the end of the road. Turn around, immediately turn right and drive down to the shale beach at Fremont Canyon Campground & unload your boat(s). Re-park your vehicle at the paved parking lot.