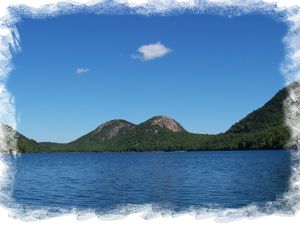 Last week I had the pleasure of spending a week kayaking on and around Mt. Desert Island in Maine, home to Acadia National Park. My focus was on paddling the glacial lakes that are present on the island as I spent 6 days on 4 different lakes plus I did some time on Frenchmans Bay traversing several of the many coves that dot the shoreline.

The first stop was Echo Lake on what is known as the quiet side of the island. I was just getting settled into the boat from the put-in when I noticed a fishing Loon about 25 yards away, those birds are simply amazing in the distances they swim under water I'm guessing somewhere between 50-100 yards so you never know where they were going to pop up. Since all of these lakes were carved by glaciers they tend to be long narrow bodies of water with steep rocky shorelines not giving you to many opportunities to pull out. The best part is there are very few, if any, power boats which are limited to no more than 10hp. After about 3 hours of exploring and photographing I called it a day and loaded up the yak.

Later on in the evening while touring around (in the car) I stopped on a remote rocky shoreline on the west side of the island and had the pleasure of spotting a mature Bald Eagle about 150' away sitting on the top of a pine tree, what a sight to see.

Pretty good for the first day! 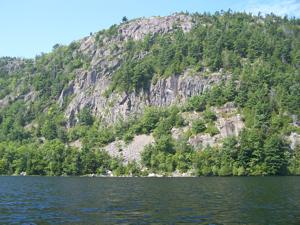 On day two, I went to Eagle Lake in the heart of Acadia National Park where they there is a great put-in to launch from. This lake was larger and wider than Echo and certain sections had a slight chop of <1' which made for some interesting paddling. The views of the surrounding mountain peaks were simply breathtaking which made up for the lack of wildlife or at least I thought it did. About of the way though I spotted another Bald Eagle take off from a grove of trees at 1 o'clock after making several low passes the eagle rode the wind currents in their typical circular fashion literally gliding into the heavens.

Day three lead me to Jordon Pond again in the heart of Acadia. Jordon Pond was the smallest body of water I paddled. Once again very scenic with a great view of the rock formation called the Bubbles.

Day four I ventured back to the quiet side of the island to visit the Great Long Pond which is the largest and longest lake I encountered; I think its about six miles long. Since there are two launch locations, one at each end of the lake I decided to break down this lake into 2 different paddling sessions over two days. First I decided to paddle the heavily populated north end of the lake with an endless supply of lake shore dwellings. Once I navigated through the armada of rental canoes and kayaks, I reached the area within the National Park with no houses and only a few hardy souls. With a stiff wind blowing from the south I decided to not travel across a long section of unprotected waters and opted to explore a large cove which turned out to be a great choice. Not only were the waters much calmer but in a few minutes, I spotted another Eagle take off from its perch high in the evergreens (you always have to have the camera ready) fortunately this one stayed in the neighborhood and only flew to some trees on the other side of the cove graciously posing for several nice shots before moving on. I also heard some loon(s) but could not locate them. 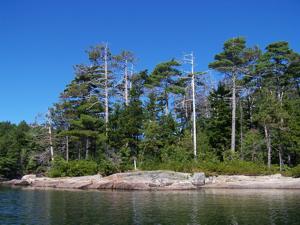 Day five included the mostly untouched south end of the Great Long Pond. I paddled about a third of the way up the lake to where it really widens and the wind becomes an issue. At this point I located a nice beach area to pull out and have some lunch before heading back into the stiff headwind and calling it a day.

Since day six was the last full day I was going to be there I decided to stay close to cottage I was staying in. After carefully checking the tide charts we carried the kayaks across the street and launched them in the cove at about high tide. We paddled up several coves admiring all the Maine coastline has to offer before heading back. On the return trip we encountered a pair of resident loons who put on quite a show for us as a fitting tribute to the whole trip.

One parting note: in between kayaking I did find time to take a whale watching trip which was fabulous in itself.

Acadia National Park is located along the rugged, rocky coast of "Downeast" Maine. Most of the park is located on Mount Desert Island, which is accessible by vehicle. The park is approximately six hours north of Boston.

By Car
* From Boston take I-95 north to Augusta, Maine, then Route 3 east to Ellsworth and on to Mount Desert Island.

* For an alternate route, continue on I-95 north to Bangor, Maine, then take Route 1A east to Ellsworth. In Ellsworth, take Route 3 to Mount Desert Island.

Distances from Other Cities:

By Plane
Direct flights from Boston's Logan Airport land at the Hancock County Airport, located 10 miles from Acadia National Park. National airlines serve the Bangor International Airport, about one hour from the park. Car rentals are available at both airports.