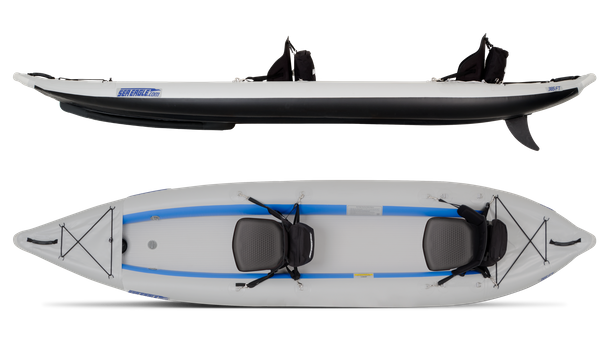 Not for the Mediterranean Sea...

I bought the 385 Fast Track with the Pro package and an electric pump with the battery pack in 2013, delivered to Luxembourg where I usually reside. I transported it to Greece in a place called Kalamata where I spend my holidays.
Everything worked perfectly up to August 2016 when part of the seam in one of the main chambers opened (10 cm) because the pressure increased due to high temperature . I repared it in a local professional boat expert and we tested it and everything looked fine again.
This year however I experienced a total disappointment because during the first exposure to the sun another part of the seam opened although I had not put much pressure (2,9 instead of the recommended 3.2)! What is worse, is the fact that the entire seam looks defected and can be opened easily like a toy.
Nothing to do about it, so we decided to throw everything away. It is too risky to paddle away (about 5 miles and return) in deep sea waters.

It is really a pity because up to last year we were very happy and were enjoying with my wife our daily excursions in this beautiful corner of the Mediterranean for about a month.
My understanding is that this kayak is not appropriate for so high temperatures and too salty waters! While the material is really strong and resistant this is not true for the seams! And it has too many seams on the main chambers! I would love a kayak that does not have seams or one with minimal and reinforced seams!

The other disappointment is about the battery pack: it stoped charging this year! So, the only way to use it is through the cables connecting to the battery of the car! I looked for buying a new battery pack but I could not find (or they do not deliver outside the US).

Overall I would say that I enjoyed it for 3 years, and I was proud of it, I was even advertising it and suggesting to many tourists who were asking me how much it costed and where I bought it, etc....

The bottom line however is that it is probably not appropriate for the ...Mediterranean sea.... which is exposed to high temperatures!