by Perception
Details
I got my plastic shadow a month or so ago and paddle it mostly in the Laguna Madre (bay) and offshore some. I'm 5'3" at 165 lbs, 34" waist, with a size 8.5 shoe and I find this a very tight fitting boat, especially for my feet with water shoes on. I got a good (great actually) deal on this boat and it even had a serviceable spray skirt.

I'm planning on doing a long trip with it soon, 400 miles along the Texas ICW, the bays and offshore, It's a tight fit but all my gear and food, including 7 gallons of water, all fits in the boat and it still floats! I'm sure I'll have more to say about it after I do this trip, but all in all I feel this boat is up to it, now I just gotta get over this nasty cold I got! more to come ...

by Spring Creek Manufacturing
Details
I've used the Spring Creek kayak cart now for 2 summer seasons. For the start of the second season, I modified the cart by removing the single handle and adding two equal length bars, one to each side. Now the boat can sit with equal weight, centered between the two bars. With duct tape, bungies, etc., I got this to not only portage a 70# tandem plastic kayak but also a big aluminum canoe, and this is over some pretty tough trails!

This is truly the 4x4 of the kayak carts! Unlike other carts that have an axle, the Spring Creek has some serious ground clearance. Also the wheels work well, though I did have to add some washers to the mounting nut. This cart can straddle big rocks and small boulders in the trail where lesser carts would just get hung up. It's like a spider walking over a boulder field.

With my mods this makes out to be a good cart. I'd be happy to share pics and more notes about this with anyone wanting to know more. I'd give it a 10 if spring creek would include these mods but as it is just an 8. 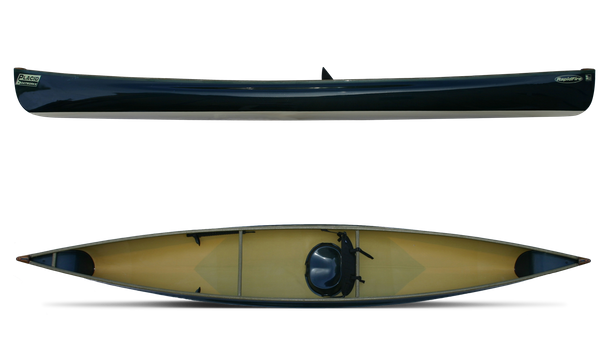 by Placid Boatworks
Details
We got our Rapidfire in Aug. of '09 and I used it in the Adirondack Classic 3-day "90 miler" race a month later. (#39) this was also my first "90" so I had quite a steep learning curve ahead of me. I built my own knupac portage device and finally got it fine tuned by the last day of the 90 and the whole boat and portage device worked out great. I wanted the portage device to work for both the 90 and for camping, kind of opposites really but that is what I was going to use the Rapidfire for. I've got some multi-day trips planned for next summer with the rf and feel it's going to do a great job!

But back to the 90... and there were several Rapidfires entered, along with a couple of Spitfires. Joe Moore of Placid Boatworks was in his new tandem. there was also the "red tigershark" rf... since this was my first 90 I entered the open touring divison and took off on the first wave. On the second day I was about boat #8 to make it to the bridge and in the top 25 towards the end of the lake and that's when all the multi engined boats started catching up to me, including the war canoes. I had my gps with me which really helped keep me up to speed but it's really tough for a little'ol solo pack boat to keep up with these greyhounds. when I stopped paddling for a drink, gu, etc I came to a stop while the multi engined boats would pass me up, ug. but as long as my motor has some steam in it, the rf would do a pretty fine job of moving along, especially at the end of each day where I somehow managed to fire the afterburner miles before the finish and pass quite a few other boats, much to my astonishment! at the end of day two a k2 had just nosed me out at the line but I bet they were really working for it cause I was on full afterburners and doing over 6ish mph for quite awhile! Now if I had the motor of the red tigershark, well, things would have been a whole lot different! I was able to paddle with the tiger a bit and learned about strokes but it wasn't for long.

All in all, I'm quite proud of what I did in the Rapidfire, I finished as the top solo boat in the open touring division but not nearly as fast as the other Rapidfires racing in their class. the rf can be a fast boat but it can also go the distance. I can't wait to take it for some serious camping next summer!