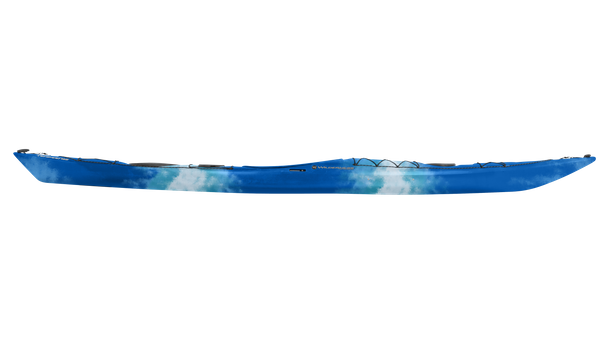 by Wilderness Systems
Details
I once had a Tempest 165 (2007 model) and I do have a Tempest Pro 165 now. I recently used a 2010 plastic Tempest 165 a friend has. I only am reviewing the new rear hatch cover here. The kayak is great.

The older rear cover leaked and imploded and was awful. The very original one was nice and you could use a bungee if needed. The bad one, or awful one, was the second generation design. This last one (I think 2009 is when it came out?) works well. It did not implode and it did not leak. I rolled the kayak at least 20 times and even let it float around upside down for a while. I was happy to see the rear compartment still dry.
I don't know if it is another case of some do and some don't but this did not leak at all.

by Wilderness Systems
Details
I got a t165 pro in September. Ive used it a good amount since than and will add some comments about it. First, I was nervous about this boat being my choice because of a lot of negative feedback on build quality. The boat design and how well it is suited to me is what I had to ultimately go with. I never had a pro prior to 2009 so I can't compare it to that but the new boats are not made like the old boats. the 09's are not made in u.s. anymore where fdep and osha and other federal regulations make it impossible to do fiber-glassing with any real quality and still make a profit, unfortunately, so they have the fiberglassing done in a china plant. They are vacuum infused and the glass is very consistent throughout. The foredeck has some extra cloth (i think) which i like.

I was a little worried about the flex behind the rear deck and how it would hold up sitting on it. I sat on it and its fine. it has some flex but I had no issue. I wouldn't mind that being beefed up some though and I may do that. The hatches are KS which is still standard on the pro's right now and they are excellent. I have gone back and forth with confluence questioning things I didn't understand regarding the construction and had everyone of my questions answered to my satisfaction. I don't know how the boat will be next year but right now there are zero, none, not a quality issues.

For my use, I had to make a few modifications but they were easy and effective. I tried other "top" brands and like those as well but I must have a unique build because out of those I did sample the t allowed me to do what I could not comfortably do in those kayaks. A simple layback on the deck test quickly allowed me to exclude certain boats while making some candidates. Someday I will come across a boat that allows me to do it as well as the t and I look forward to that day.

the skeg does clank against the inside of the box sometimes when down but that is just not an issue to me and many others have pointed out a simple fix if it were to bother someone. I don't understand the need for slidelock foot braces in a sea kayak but that too is a non issue. that is, by the way, something i modified.

I do think that all reviews regarding build quality prior to 2009 should be reviewed but keeping in mind that the 09 quality is a different boat. they are just built different than they were and the glassing process in itself allows for a slower build which allows time for working areas that need work during the process. The resin is vinyl ester, not poly ester and is excellent. This is more forgiving on impacts than epoxy as well. The gel coat is the same quality brand as many other top brands. The seems are taped well and the reinforcing patches at all pad eyes is good too. Attention is paid to the ends of the boat for strength. Special "paste" of some kind is used along the seams (entire boat) and special resin is poured into each end to add strength though I think that is a pretty standard method (end pour). I will let you know how that works some other time if need be.

The outfitting doesn't need to be covered here. Its just a very adjustable, accommodating setup. I have a 165 pro and the hip pads without any additional padding were too tight for me. taking them out was too loose. I turned them inside out and fillet the attached padding down to where i was comfortable. I don't know if pre 09's had a slanted bulkhead behind the seat but the 09's do. I also have a t-165 rm. there are differences between the two. the pro is faster and more responsive not to mention much lighter. The rear coming is a little higher on the pro but is not an issue due to the positioning of the back band for me. I do wish that cargo transport companies were more careful. I would prefer to buy a boat off the floor but if you cant and it gets shipped to a store for you you chance damage due these companies. No big deal to replace except loss of time. I replaced the first one because of transport damage. had the new one in a week. my dealings with the store and my dealings with confluence were good experiences and everyone was helpful. In the end, find a kayak that works best for you or at least best you can tell at the time than check its quality out. There are a few top named companies out there that early on had pretty bad reviews and they did what a good company would do. They fix the problems. There are still some reviews based on what others have said without these people checking out the post fixed conditions of the product first. the tempest pro's have gone through the steps to correct negative aspects of the boat and at least from 2009 and until they change any build methods again should be checked out without any pre-notions. if you do, you may find yourself with a nice boat. also might not but you decide. I would base any decisions on a boat that has gone through build method changes with a personal inspection. The least important issue about the boat is the fact that it looks so good. that's just a bonus!! If you get one, enjoy it...If you get something else, enjoy that....

by Aqua-Bound
Details
I used the carbon Stingray with the white abx resin blades for maybe a year or more. I love it. I didn't think I would ever get another paddle (unless something happened to it)... couldn't believe how light it was. For Christmas I told my wife I wanted an all-carbon stingray: 26 oz and $300.00. I didn't think she would get it.

Well I got it. Now I can't believe how heavy the other ones are... and they are super light. I would never have bought the all carbon for myself and I'm really glad my wife did. They are just great... the store did give her 20% off the price so it was a little cheaper. anyway, worth every penny.

by Perception
Details
This is my 4th perception. I took this one out for the first time today and I like the way it rides. I was glad to see that it reacts well to leans. it is a very good boat for me. It is also the very last perception i will ever buy. The 7 rating is because it is a very good paddling rec boat. I can’t give it a 10 for being a good rec boat because it is Perception and out of 4 of them I can see that the quality gets worse every time. I can also say from experience that if something happens to the boat and it needs to be warranted, expect to wait a very long time for a replacement. Some of my wait was the store I bought from. Perception is scaring me right into selling all of them and replacing them with anything but watermark products. The first thing i had to do when I got the Acadia was reseal the bulkhead. They did a junk job. There was water in the stern when I picked it up from the store. I hear Necky is very good and not yet willing to mass produce junk. Maybe perceptions touring boats are better, I don’t know but I will not spend that kind of money to find out.

by Perception
Details
Took the boat out for 2nd time today. One of the supports that hold up the seat broke off. The word junk is coming to mind about now. Very poor craftsmanship on this one anyway. That’s 2 problems I’ve had and 2 outings. No more perception for me.

by Perception
Details
I have a Sundance 9.5 and a Sundance 12. The Sundance 12 is faster but I really don’t think it tracts a whole lot better than the 9.5. I used the 12 on a river that I’ve only done with the 9.5 and had trouble in some tight spots that I was able to breeze through with the 9.5. After using the 12 for awhile a realized how easy it was to get around with the 9.5 and I also realized that I would rather use the 9.5. I guess I’m saying that the 12 ft. isn’t doing anything that the 9.5 didn’t do, except for speed.

by Perception
Details
I just tried the Sundance 12 out for less than 1 hour on a lake. The water tight bulkhead is a sales pitch. 1 hour with nothing more than paddle drip and the thing leaked. I will fix it myself so I know it will be water tight. If perception can’t keep water from getting through a bulkhead, than I’m not sure how much I can trust their product. When I step up to a touring kayak I will not consider Perception. It is too bad though, the Sundance moves pretty good and is very responsive.

by Perception
Details
I took the sundance into a very large lake on a very windy day with water skiers also on the lake. I wanted to see how it would handle. The wind was making waves up to 1 foot and the skiers added some to that on occasion. I was very happy to discover that it tracked very well and cut through the waves very well. I usually on paddle in a slow moving river so i'm not very concerned with speed but on the lake it actually moved pretty well, especially under the conditions. This is a perfect size for me since I have tendinitis in my shoulder and i can get it on top of an expolorer without struggling. considering i usually take one or 2 of my sons and have to put 3 kayaks on the roof. I will not need another one of these but my kids use sparky's and I plan to get them sundances.

by Pelican International
Details
I have 2 Pelican Waves and my kids use them on lakes and slow rivers. They work pretty good and are not hard to control. They will turn sharply to avoid objectd. They are very tough. You have to be careful with over paddling and the dual tracking system will work.