by Wenonah Canoe, Inc.
Details
Now that I've had my Northfork for a year and put a couple hundred miles on it, I'm ready to give a review. I mostly paddle the Greenbrier River (class I-II) doing mainly overnights. I mostly paddle this beast solo, which is doable when loaded with gear. This boat has been discontinued, but is a nice craft. It is more of a recreational workhorse poly boat. Pretty heavy, but you can drag it and beat it to heck for many years. More my style.

It is comparable to a Old Town Disco 169, but with a few noticeable differences. First of all, this boat is very well made, much like the Old Towns of yore. The quality blows the newer Old Towns out of the water. The Poly blend is a little stickier and more pliable feeling compared to the harder old town blend. The Northfork also has a shallower shape than the disco 169. The sides in the middle are pretty close to the water in comparison. Much easier for waves to get over the sides. It also has an extra thwart, so you can't flip your boat and paddle backwards like in a disco. Mine has nice lowered webbed seats, which are great for staying stable.

by Klymit
Details
Great pad that I have used many times in cold and warm weather. I am large and tall (6'6" 270) and a side sleeper, yet this pad is perfectly comfortable all night long. It takes 10-15 breaths to blow up and rolls up to the size of a Nalgene bottle. It is insulated and has a really high r-value. I have used it down to 20 degrees on snow pack and it really helps keep you warm. I find it more comfortable than a Thermarest and way cheaper at around $75 on Amazon. 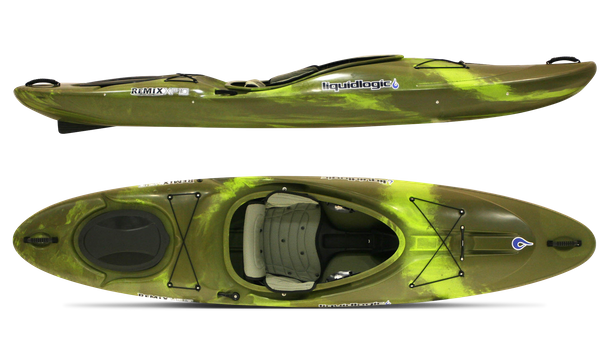 by Liquidlogic Kayaks
Details
I have had my Remix XP10 for almost 2 years now. I use it primarily for multi-day kayak trips down the Greenbrier River in WV. In the spring of this year I paddled this boat loaded down with gear for the entire length of the river, from Durbin to Hinton, about 150 miles. I was in the boat around 10 hours a day paddling over 20 miles each day on average, for 7 days. I have to say, the outfitting and seat comfort are amazing. I have never felt uncomfortable in this boat, and I am not a small man at 6'6", 270.

Pros and Cons have pretty much been covered by the other reviewers. I'm just happy that it fits me and all my gear! Its a great boat for big dudes.