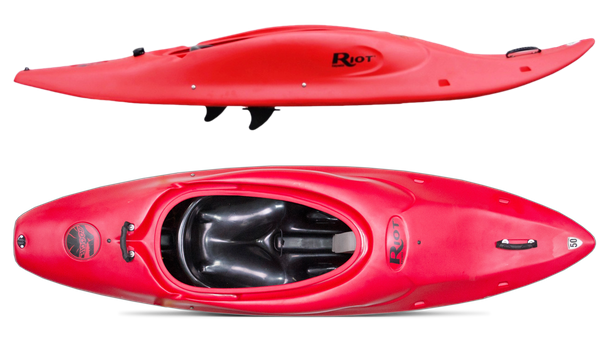 by Riot Kayaks
Details
I think this is a great beginner surf boat. It has very user friendly rails, and is quite fast on the takeoff. I liked how it held it's line. I think the outfitting was a bit weird. But I also liked the grab loops and the drain plugs.

by Superior Kayaks
Details
Superior Carbon Fiber Greenland Paddle. It is very stiff and very buoyant, the blade width is probably just a hair wider than I like for my hand when I use a home carved paddle. It is as reported very light. I've put in quite a few miles with it so far and really like how the paddle reacts in the water to rudders and draws. I also think the sprint speed is a bit better with this paddle than say with a hand carved western red cedar paddle. It is really only slightly lighter than a light WRC paddle though.

The cons on this paddle are obvious, the carbon fiber is too slippery. My hand has slipped off a few times underwater when trying to roll. I've corrected this with paddle wax which makes the whole paddle tacky and sticky to the touch. I may also add some reflective tapes to the tips to make the black paddle stick out a bit more and also to protect the tips from the many rocks I am bound to find. I wish that superior could do a bit more for custom sizing, I understand it comes from a mold so it is limiting, but it would be nice to be able to get a slightly longer loom with out lengthening the over all paddle, and also to narrow the blade a bit for those of us with small hands. But nothing is perfect. I think my speed and acceleration with this paddle is better, but time will tell.

I reviewed the OuterIsland over two days on Lake Michigan. THE…

I reviewed the OuterIsland over two days on Lake Michigan.

THE KAYAK:
First off The OI I paddled was brand new and was flawlessly finished. It is very light for a kayak of its length. It won't be quite as durable as a valley or NDK of course, but the weight savings are where it's at for this kayak anyway.

The deck rigging was good. My friend noted that he would prefer a better aft deck rigging for a paddle float rescue. But I didn't care too much about that. The hatches are valleyesque, and stayed dry even after repeated dunkings.

NO Compass recess. Well you can't have everything? I saw this kayak as a day touring kayak, so that didn't bother me, but it is worth mentioning.

Seat was ok. IR backband is terrible. The IR reggie is smaller and wouldn't stick out past the coaming. Laying back was a pain, and very stiff. I would replace that backband.

The thigh bracing was ok, would probably make it a little more aggressive. Also an option for a small round ocean cockpit would be nice.

Pro's of paddling the OI.

This kayak is fast. Very fast, had no problem maintaining 3-4 knots in a headwind.

It does behave very predictably edge-edge.

It rolls pretty well due to the low windage. But the stock backband was a little tough on the body. (But it's obviously replaceable.)

It is not prone to weather cocking due t that low windage.

Con's of paddling the OuterIsland.

Poor maneuverability. When edged this kayak did not want to skid out. Coming up wind or downwind. Stern ruddering, stern draw, bow ruddering, or whatever made no difference, this kayak wants to go straight. This is great if you are keen on speed and tracking, but it is not a very loose kayak.

I would like to paddle it again in higher winds, I only had 5-10 knot variable winds on a relatively calm couple of days. But it was a fun kayak to keep moving, I did about 12 miles in pretty short order.

I have not paddled babina's strip built design, but I think it's pretty cool that an amateur builder came up with a design this fast, this low volume, and it is made by a great company.

by Nigel Foster Kayaks
Details
I purchased a Walden Silhouette in Red this year. The layup and overall appearance of this kayak is very good. The inside and outside seams are excellent. The hatches are watertight, but with the way they are recessed extra care must be taken to ensure they are sealed properly. The deck layout needs some work, there are no recessed deck fittings, (RDF's) ahead pf the compass recess for storing a spare paddle, or for simply parking your paddle. There are no rescue lines along the cockpit, or ahead of the cockpit. The deck bungies aft of the cockpit are not helpful.

The seat in this kayak is ok, but not great, the same goes for the backband, ok, but I will be replacing them. I have demoed the seaward version and their seat and backband are no better. The skeg slide is the thin wire with the knob that slides up and down, with no steel bar. No problems to report yet. The footbraces are a little rickety and need adjustment, or perhaps replacement.

All this said, the kayak handles marvelously. I love the low volume fore and aft decks, the clearance for a traditional paddle is amazing, it is pure joy to just go forward in this kayak. It moves effortlessly along the water. Turning the kayak with a variety of edging and leaning techniques provides surprising results. I am still learning the secondary stability in this kayak, but I have started learning to balance brace in it, which is something that eluded me in my other boats.

Packing a boat for trips with so little volume is only possible due to the large oval vcp hatches. I practiced packing it several times before buying it, and I got all my gear to fit with room to spare, but I did have to chuck a few extras. There was plenty of freeboard aft after loading about 80-90 lbs of gear. (I weigh around 175) Looking forward to tripping with this kayak. I also like having my dayhatch fitted to the left rather than the right.

Handling this boat in waves and rough water is alot of fun, edging the boat while on a wave steers this kayak better than any other boat I've paddled. The angled bulkhead is great for dumping water after rolling, or during rescues. The listed weight is accurate and the boat is easy for me to cartop, (I'm only 5'8").

by P&H Sea Kayaks
Details
I test paddled the project X version of this boat from my P&H dealer in Michigan several times in varying wind and wave conditions on Lake Michigan. With minimal padding I found the cockpit a nice fit for me at my size (5'8" and 180 lbs). This boat is very fast when headed on a course and if empty does weathercock a little, (I do mean a little). With the skeg deployed this is easily corrected. But with a moderate-heavy gear load the boat doesn't need the skeg quite as much. Carved turns work really well even with the skeg deployed.

The seat is very comfortable and I paddled many long hours along the coast of Lake Michigan and never had my legs or rump fall asleep on me. The backband provides excellent support in the right spot. The initial stability is a little tricky at first, but the secondary stability is quite solid. There is a solid feeling when doing high braces and side sculls. Rolling the boat is predictably easy. The hatches are also very watertight and I never noticed any leakage in any of the compartments.

I ordered and bought my own in kevlar from Lee's in Kalamazoo with the custom mounted bulkhead and footpump. Now with the bulkhead set at my inseam the cockpit is a perfect fit for me. One thing this boat is missing that I think kajak sport and P&H should remedy is a front hatch size a few inches wider. The hatch works the way it is, but a 10-12 inch hatch might work a little better when loading loads of gear. Also the color choices are ok, but still not as cool as some other manufacturers e.g.: seaward kayaks, current designs, or now even NDK has the sparkly/metallic gel-coat option. I realize that these are cosmetic items, but they do add up to something for overall customer satisfaction.

The boat that I took delivery of is flawless in its layup and manufacture and is everything I wanted from a sea kayak. Fast, light, loads of room for gear, stable and easy to steer in wind and waves. Definitely something I would recommend to the serious paddler wanting a boat to go long distances on the Great Lakes or the sea.

by P&H Sea Kayaks
Details
Just bought the Capella RM. I've owned a few other touring boats before this and consider myself an aggressive intermediate sea kayaker. I like big water and covering distance and the two perception boats I owned before this did not handle either of these too well. The Capella is very fast and very nimble in bigger water. It tracks very well for something as short as it is, 16'6". Like the feel of the cockpit and the backrest vs a seatback. The seat itself is seemingly identical (in shape) to the comfortable seats P&H puts in their other composite boats. I found it very comfortable. The boat rolls easily and the low aft deck facilitates a layback and sweep style I'm learning for use with the inuit paddle. The square hatches are a little goofy as are the color choices, but they seem to be there for functionality over fashion which does have its advantages. The welded bulkheads, the narrow beam, and fast hull, make this boat a true sea kayak, and more than just a touring boat in my opinion.

Short story is I've paddled a lot of polyethelene touring boats and this is the first one I'd actually recommend to someone who has some paddling experience under their belt, but not quite as much bread in their wallet.