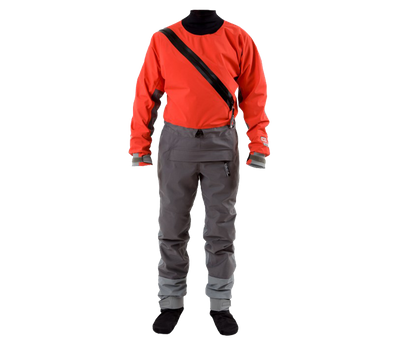 by Kokatat
Details
I've had my SuperNova for a couple of years, and have gotten good use from it. I have had no issues with its construction, the zippers have not let in a drop of water, and the breathability, while maybe not equal to Gore-Tex, has been quite good. The booties are the best feature; I love having dry, warm feet when I paddle! I wear this often for full day paddles and have found it an excellent alternative to a full dry suit for the price. I do find that the neoprene neck lets in a fair amount of water when submerged even when it is cinched tight (I have a pretty small neck). For this reason I may pick up a lower-end full drysuit just for when I know I will be getting wet, but the Supernova will still be my go-to suit for everyday paddling.

by Current Designs Kayaks
Details
This is an update of my review from 3 years ago. Though I stand by all of my previous comments, I have lowered my rating of this boat because of what I feel are sub-standard construction issues. The two major ones are the glued-in plastic bulheads (flimsy and just asking to leak) and poorly finished and ill-fitting hatch fittings. Though I have had only a very tiny leak in one bulkhead, the bulkhead construction is not up to the standards of any other fiberglass boat I have seen. Why not glass in the bulkheads?

The hatch fittings have been a problem for me (leaks) since the first year of owning the boat. They are not well fitted into the deck openings, are secured with only 4 screws, and in my boat at least were not well caulked. My rear compartment takes on a considerable amount of water whenever the rear deck gets reasonably wet, and it comes in right between the deck and hatch fitting. I have pulled the hatch off and recaulked it, but that has only helped marginally. Again, in examining many other brands of fiberglass boats, nearly all have much more carefully finished and sealed joints between the deck and hatch fitting.

One other more minor issue; I had the compass factory installed, and it was placed aft of the forward hatch. This placement not only impedes my ability to move the bulkhead forward and/or add a footpump, but also tends to induce neck strain and seasickness if I have to refer often to the too-closely positioned compass.

Now that I have paddled, examined, and learned about many more boats than I did when I first bought the Slipstream, I would think twice about buying another CD kayak, despite how much I like the design.

by Current Designs Kayaks
Details
I love this boat! I violated the cardinal rule of kayak buying by purchasing this boat without paddling it first, based on my research and paddling of other boats. I was looking for a smaller volume boat with a skeg, and the overall shape and dimensions as well as hull configuration of the Slipstream seemed to be just what I was looking for. Luckily, I was right! It tracks beautifully, though in a strong side wind it has a tendency to weathercock somewhat without the skeg. With the skeg down it is rock solid on line. It also edges and turns amazingly well considering my "developing" skills; and rolls with ease. In fact, the first time I righted myself in this boat I used way too much effort and did a complete 360! You barely need to flick the paddle, a little hip snap, and you're up. A nice low deck behind the cockpit helps considerably. I am 5' 7", 135 lbs., and the fit is excellent, though I (my boat, that is) could probably use a bit of padding at the hip braces. Other niceties; the backband gives enough support without getting in the way, a tow line is included, and I like the artsy decal on each side of the bow. I would recommend this kayak to any smaller paddler who wanted a responsive (feels a little "twitchy" at first) boat that also tracks well and is beautiful to boot.