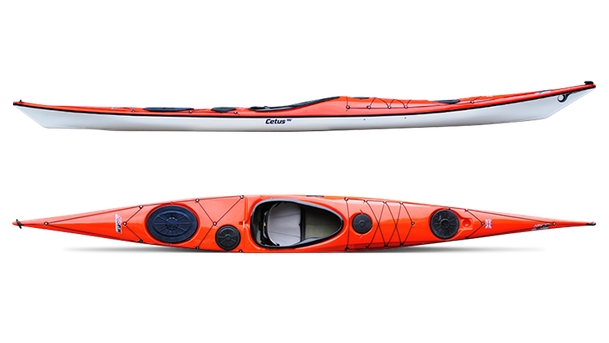 by P&H Sea Kayaks
Details
Let me start by stating that my review will not be as thorough as the ones before me. I picked this kayak up on a trade-in -- I traded a 2010 Current Design Solstice for a 2011 P&H Cetus MV. A great trade.

This boat is a paradox in that it is very, very stable. I have heard one reviewer describe the Cetus line as being "dumb" stable -- so stable that you might think that it is not agile. Well, here is the paradox. While it is stable, it is also very agile. It leans very well with the result that you get great curved turns. It responds effortlessly to hip flicks. This is a fun boat that seems to be at ease in almost any weather condition.

Of all my boats, this is the one in which I have the highest level of confidence. Well built, stable, agile, fun -- that is why it rates as high as it does.

by Valley Sea Kayaks
Details
A good boat with a combination of vices and virtues. First of all, lets be honest -- this boat is built. It is heavy, but very well built. It can take a far bit of abuse. Second, it has pleasant lines. However, it has a few interesting vices. First, initial stability is relatively low given the vee shaped hull. It also has a tendency for me of some weathercocking (a bit of skeg did a world of difference).

A good boat but there are better out there (e.g., VCP Aquanaut, P&H Cetus). 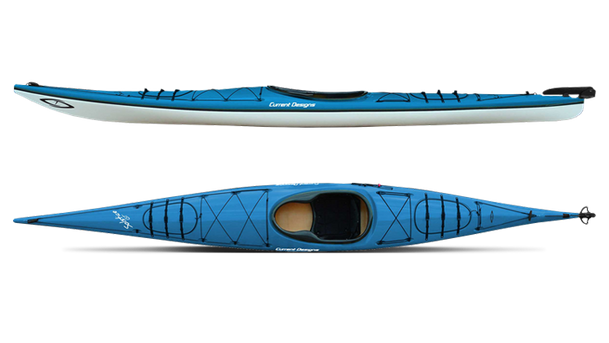 by Current Designs Kayaks
Details
I traded in a 1998 Solstice GT for the 2010 version because of the changes in the hatches and the new rudder system. Well, after having worked with this boat for 3 months, I decided to trade it in for a Cetus MV (which is a better boat). While the new design corrected some problems, it created others.

First, the new cockpit design does not work for me. It is too big. With the old design, I could use the same sprayskirt on multiple boats. For the new design, I had to go from a 1.4 seal to a 1.7 seal. Second, the new rudder system is a real trade-off. On one hand, the pegs don't move. On the other hand, I have difficulty in centering the rudder when I retract it. Finally, for some reason, the boat feels big. It has become large, stable, and not as easy to move around.

In short, the boat, for me, became boring to paddle.
For many paddlers, this will be a great boat; for me, it no longer works. As I said previously, it has been sold.

by P&H Sea Kayaks
Details
I have paddled many boats (e.g., Caribou S, Gulfstream, Kodiak, Solstice, Magellan, Q-boat) and this boat ranks up at the top. First of all, this boat is designed to play. It can move and change direction quickly -- all that is required is a slight edge and a sweep and you are going in a different direction. Second, it is fast. Third, deck layout is great. Fourth, quality is top notch. Fifth, stability (secondary and primary) is very good -- very confidence inspiring -- a boat for all levels.

I have only two criticisms.
First, the back band does not sit properly for me.
Second, you have to get used to the two step system for adjusting the skeg - first pinch and push and then adjust. This has been corrected in this year's model.

Finally, how do you spell the Capella 167 - simple -- F-U-N.
Highly recommended.

by Valley Sea Kayaks
Details
A great boat -- one of the best all purpose big person kayak. I purchased the 2008 version. This boat is the best that I have paddled -- it handles all conditions very well. Well built; rugged; great stability; very confidence inspiring; very forgiving. The problem with the boat has apparently been corrected. In my version, the back band tends to collapse. In addition, this is a heavy boat -- balances well but it is heavy. Highly recommended.

by Hurricane Kayaks
Details
Before entering into the review, let me give some background. I have paddled numerous kayaks. Currently, I own a CD Gulfstream, caribou S, solstice, a VCP Aquanaut, and 2 Feathercrafts. I have paddled numerous other boats, but this one tops the list as one of the worse. I realize that it is a specialized boat aimed at exercise but that does not excuse what I feel is poor design.

First of all, the kayak is designed for exercise. Fine, however, that does not excuse certain design features. For example, there is no rigging in front of the cockpit. This rigging would have been useful for storing hydration packs. Even having a day hatch a la Cletus would have been useful. Second, the boat has very low primary stability. This is unusual given that the boat has a 23 inch beam. I have paddled boats with 21 inch beams that have far better primary stability. Third, this boat needs either a skeg or a rudder. This boat has an extremely bad tendency to weathercock in any form of wind or wave.

During a recent paddle in very moderate waves and wind (something that my other boats would have handled well), the boat wanted to go its own. I simply gave up paddling just to see what it would do. Well, it swung around -- driven by the wind and waves. Lets see -- poor design, poor primary stability, excessive windcocking -- not good. That's why this boat rates a 6.

by Epic Kayaks Inc.
Details
Wow. Last week was my vacation and I spent most of the week paddling. I took out the EPIC. Usually, my paddles of choice are either Lendals or Werners. These are good, sturdy paddles. Then, there was the Epic (the one that I used was the Signature series with burgundy shaft). It was light; it cut the water beautifully; there was power in every stroke. This is a paddle to enjoy for both its beauty and its functionality. It is a 10 and worth it.

by Feathercraft Products
Details
Let me begin with the negatives of this kayak. I own two other Feathercrafts -- a Kahuna and a K1. Unlike these two boats, the Java does not come together as well. The side stringers did not assemble as well -- they did not join as tightly as in a K1. The boat needs the skeg. For my boat, with the skeg up, the boat handled like a drop of water on a hot plate. The skeg is not as easy to deploy as it should be.

Okay, having identified the weaknesses of the Java, lets talk about what makes this boat so neat. It is so simple to use; it is just plain fun. With a regular kayak, there is a "protocol" -- you put on the sprayskirt; you put on the PFD; you ensure that you have a paddle float available. This takes time. With the Java, you grab your PFD and your paddle. Attach the paddle to the lash and get in the water. The boat moves well; the turning of the boat is amazing; the boat is stable (even when the water is not). Even though it is a wet ride, it is a fun ride. This boat introduces you to kayaking in its simplest form.

A fun boat and one that I am glad that I got.

by Feathercraft Products
Details
This is my second Feathercraft (my first was a Big Kahuna) and my sixth kayak. I have now had it out for a week and I have walked away thoroughly impressed. This boat is great on the water -- there is no performance penalty. It is stable -- in confused waters, it seems to find its own way of getting out of troubles. It is easy to paddle and to maneuvre. It is a great boat -- just as good as my CD Gulfstream or my Necky Looksha IV HV. Unlike the Kahuna, the structure seems to be rock solid. In short, highly recommended.

My only ding -- I have the boat with the sailing modification. The assembly was a real pain in the a** -- more so than it should have been. Highly recommended.

by Feathercraft Products
Details
I bought a Big Kahuna to replace a Folbot Kodiak. First of all, this is a much superior boat. It is my fifth boat (one folder and four rigid kayaks). I finally had a chance to take it out this week and I have been out in it for a total of five hours. It is a very pleasure surprise. It looks like a rigid; it is stable; yet, it responds to leaned turns; it is surprisingly fast. I have enjoyed my time in it and would strongly recommend it. I especially like the ability to pack it up. My major problem with it involves the assembly. The instructions that came with it hinted that I should set aside 90 minutes for the first time. The instructions were close to the mark. My problem with the assembly involves the installation of the fibreglass coaming. It is a bear. My first time out, I was so frustrated that I left it off. Aside from that, the craft is well worth the money. If you want a great value for the money folding kayak, then seriously consider this boat. You will not be disappointed with it.