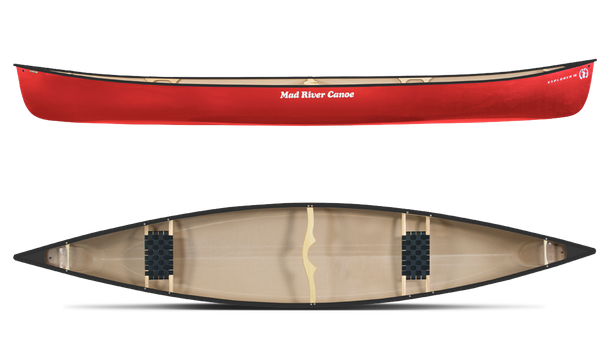 This is the one canoe to have when you can have only one. It does everything reasonably well but few things great. Being symmetrical, you can flip it around and paddle from the "front" seat and control the canoe quite well. If in difficult conditions, specifically wind, you might want to move forward a bit more, perhaps with a drop in seat or kneeling. It's not an ideal solo boat but I have many hours of paddling this solo and it works.

It is a very stable boat. I fish from it and can stand with little difficulty. I have no problem moving about the boat to grab things without feeling like I'm going to tip and I'm 250 lbs. which gives me a high center of gravity.

Speed is probably the worst aspect. It is not a particularly fast boat. I recall a canoe camping trip on Lake George where most of the group was in Bell Northstars that they rented. Though we had two strong paddlers, we couldn't keep up with some novice paddlers in the Northstars. Granted that we weren't traveling light, but it was amazing how the Northstars left us in the dust regardless of the paddler's ability. Though compared with rec kayaks it does well as far as speed. I've paddled solo and tandem in an unloaded canoe with groups of kayakers, largely with rec kayaks and had no problem keeping up and sometimes lead the pack.

But I learned a lot about the seaworthiness of the Explorer on that Lake George trip. On the return 8 mile paddle we experienced high winds and large swells and the Explorer handled them with ease, even though heavily loaded. Many members of our group in the Northstars flipped and had to be rescued. I've also negotiated class II water easily in the Explorer. I suspect that it can deal with easier class III waters, but I haven't taken it there.

Where this canoe really excels is in its load capacity. Though mfr's. stated capacity of 1,100 lbs may be a bit overstated, I've packed my Explorer to the gills with camping gear. People plus gear probably approached 900 lbs on some trips and the boat handled that with ease and there was still plenty of freeboard. It is a load monster.

There are way better canoes out there for specific applications. If you can afford to purchase several canoes that excel in various aspects of paddling, you probably have no need for MR Explorer. If you can only buy one canoe that will do pretty much everything, the MR Explorer should be at the top of your shopping list.